The Most Embarrassing Misconception

“Why on earth would any man ever see me without clothes?”

Thankfully this was not me but my 17 year old innocent roommate.

I was 20, in the final year of my engineering and she had just started college. She came from a small town and had often amazed me at how clueless she was about so many things. This made me feel very protective of her and hence, I kept lecturing her about many things, styling and dressing being one of them. So on that particular day, I was trying to convince her to give panties a try and finally make the switch from bloomers. 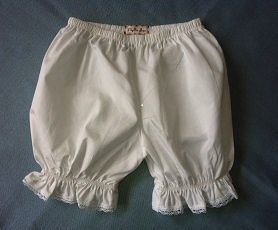 She objected to the idea saying that panties looked very uncomfortable and she couldn’t be bothered as nobody will ever know what she wears under her clothes. I laughed and said, “I wonder what your special someone would say when they see your sexy bloomers?”.

And that’s when she comes up with the above response (in bold).

I listened to her with my mouth wide open as I couldn’t believe she hadn’t had “the birds and the bees talk” with anyone. I made sure I understood her correctly and asked how she thought babies happened. Up until that day, she had believed that it was the magical kisses and hugs that did the trick.

I thought it was my moral duty to tell her the real deal. She was full of questions and felt so good (and disgusted) to be able to put everything together. Our room turned into a sex ed class that day as she invited a few of her friends who I was more than happy to enlighten.

Until the age of 7, I used to believe that we live inside the earth, not on the surface.

My idea of spherical earth was something like the following:

1. the earth is a hollow sphere.

2. the bottom 50% part of the sphere is filled with soil and water, we live on top of that.

3. the top half is transparent, through which sunlight comes in.

4. Rain falls because the water evaporated from the oceans can not escape the transparent dome, so it falls back on earth.

I had this concept of earth because when I used to look up at the sky, it looked like the sky is the inside of a huge dome.

It makes me laugh to think about this now. :-)

It’s not so much embarrassing, but it’s kinda funny. As a kid I totally didn’t understand the idea of recording or transmitting audio or video.

How does that work?

One day my mom was driving and I noticed a large building. I said (confidently) “That must be a radio station!”

My mom asked why?

I said “Because you have to have a lot of space for all of the musicians to set up their instruments to play music!”

Similarly, the “what do you want to be when you grow up?” answer for me as a youngster was “The host of The Price is Right?”

Why? Because he got to live there of course. He could play all of the games at night when everyone went home, and then in the morning people came over to play and you got to share and stuff. I assumed that Bob Barker just charged people to get into his house and then picked random people to play the games and give them prizes and money.

To this day, when I see The Price is Right, I’m sad that I was so wrong. I still want to live there…

17 Times College Professors Were Pretty Darn Funny
25 Funny Animal Tweets That Will Put You In The Best Mood
18 Cartoons Reacting To The Results Of The 2016 U.S. Presidential Election
18 Tweets About How America Has Out-Brexited Brexit