me: so like what is this moisturizer good for?
Lush employee: pic.twitter.com/ZxAt65Trzk

2.
“Yes, but maybe if I HAD these tiny whimsical bowls I WOULD throw dinner parties…” – every girl in Anthropologie ever
@AnnaKendrick47

3.
girl, are you an ikea shopping cart because i have no way of predicting what you’re going to do next
@70Ceeks

4.
Delete this before H&M see it

5.
Idk y men go to bars to meet women
Go to Target.
The female to male ratio is 10 to 1 & they’re already looking for things they don’t need.
@LeoBlakeCarter

why this mannequin look like it's about to give the most fire TedTalk of 2017 pic.twitter.com/sAG97SF3KW

7.
I like when you’re at Costco and there are about 15 adults lined up for half a chicken nugget
@thepinksinger15

Oh this purse is cu- pic.twitter.com/fISDKgollN

You'll be looking at a nice ass jacket at Forever 21 and when you turn it around and it says "MONDAYS SUCK" on the back pic.twitter.com/vHIfVK1AMi

12.
Asked a Target employee if I could open this camera before I buy it and he said he wouldn’t even care if I killed someone in front of him.
@Chelsea_Elle

When you think you found something cute at Forever 21 but they had to ruin it some way pic.twitter.com/IoIc8IHR1V

When your straight friend Jean makes a funny joke pic.twitter.com/o180oOeqye

being greeted by the lush staff pic.twitter.com/swCjPFzKJA

I just know Forever 21 is going to put this on a hoodie pic.twitter.com/j7NSeqiO8k

me: do you have this in medium ? 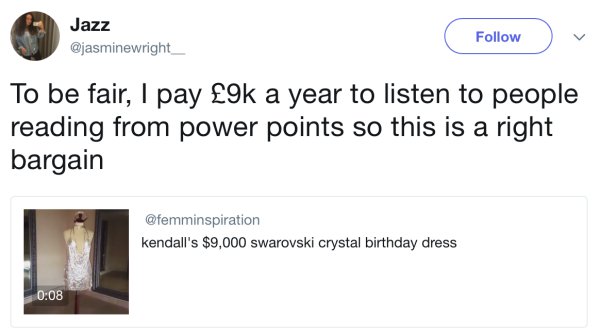 This mannequin just threw a textbook in the garbage and told me to call it by its first name pic.twitter.com/VLdvMBY17g

the river island mannequins look like they're hungover in the shower thinking about their life choices. u ok hun pic.twitter.com/OnWYg39O0z

16 “Twilight” Jokes That Will Make You Laugh
People Share The Most Hurtful Thing Someone Has Ever Said To Them
18 Of The Funniest, Most Iconic Signs From Pride 2019
16 Stories About The Skeletons In The Closet That School Teachers Keep