16 Hilarious Tumblr Posts About The “Game Of Thrones” Premiere

I can't believe Game of Thrones took the time to make fun of man buns.

1. Nothing but support for our little murder daughter
Arya Stark Committing Mass Murder:
Me:

3. Lyanna Mormont for queen of everything
Some fuckass Northern lord: Girls can’t fight for the North in this war
Lyanna Mormont:

4. Honestly, there were a lot of great clapbacks
My baby Sansa telling Littlefinger to fuck off has added ten years to my life, made my skin better, improved my health. Amazing. Keep doing you, sweetie.
countsnappula

5. Even from the Hound
I can’t believe game of thrones took the time to make fun of man buns
recently-reanimated

6. Euron’s eyeliner was on point though
Why tf does Euron Greyjoy dress like he owns a microbrewery that specializes in beers named after Judas Priest songs?
memosfromchuuya

7. We’re all ready for a little violence against Littlefinger
“jon choking littlefinger scene is confirmed in next week episode”
me:

8. Ew, Stannis’s balls
Daenerys: *Reclaims her ancestral home in a touching and powerful scene*
Me: *Can’t stop remembering the time Stannis and Melisandre had sex on that table*
iamnmbr3 10. Things you hear only on Game of Thrones
when euron greyjoy implies he can fuck your sister better than you can 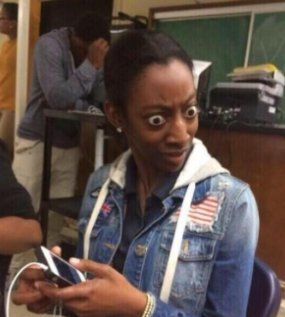 11. WHAT
me: wow that dude has a nice voice
me three seconds later:WHAT THE FUCK IT’S ED SHEERAN
king-daenerys 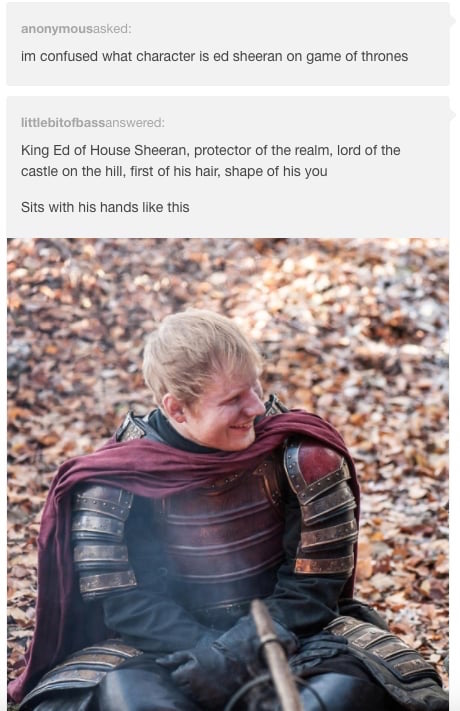 13. Did you really think we were going to avoid a “Fireflies” post?
YOU WOULD NOT BELIEVE YOUR GAZE
if ten million slaughtered freys
lupinthehowlingwerewolf

15. She’s all grown up
Watching Arya be a bad ass

16. TBH, just a great episode for women
Arya: Tell them the North remembers. Tell them, Winter came for House Frey.
Lady Lyanna: I don’t plan on knitting by the fire while men fight for me. I might be small, Lord Glover, and I might be a girl, but I am every bit as much a Northerner as you.
Sansa: No need to seize the last word Lord Baelish, I’ll assume it was something clever.
Brienne: Why is he still here?
Me:

Tagged: culture, funny, game of thrones, GOT7, tv and movies