Someone told me Neil from Art Attack is Banksy and I believe it.

To all GCSE pupils, my maths teacher told me I was going to be a dodgy 2nd hand car salesman. Well look at me now. Can't even drive ya cunt

When your mum sends you to the chippy to get some chips and doesn't ask for her change back pic.twitter.com/rsQpT1QOlJ

I NEED TO KNOW WHY EVERYONE SAID I COULD SAVE MONEY BRINGIN LUNCH TO WORK ITS 9:43 I ATE THE LUNCH NOW I HAVE TO BUY ANOTHER LUNCH FOR LUNCH pic.twitter.com/hKd6p2AaiA

Is it just me or does this sandal look like the bead game in the doctors waiting roompic.twitter.com/utWn7YhiPS

Marks & Spencer are catering for the kind of kid I was at school pic.twitter.com/mY8FtrHQzU

me n andy r out for lunch look at the size of this pepper grinder lmfaoooooo pic.twitter.com/KLlAtmQbKm

Perfect Peter always looking like he's about to drop a speech about why the working class should be hunted for sport pic.twitter.com/yM7b3Qs2DD

This how fans of sherlock and doctor who pose for their Facebook photos pic.twitter.com/PG0n4ewBac

The lecture my parents give me after they take the joke too seriously:

"how much did you spend this weekend?" pic.twitter.com/QETWkSBYVq

coworker: any big plans after work tonight?
me: pic.twitter.com/haP3FKTqhY

David Cameron is so posh his bare feet look like loafers pic.twitter.com/aGFhU8BwJj 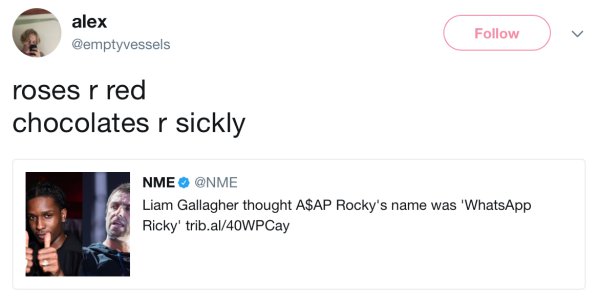 The shameful legacy of Bullseye continues to blight our streets. pic.twitter.com/l4cYb6kYtD

Saw this on the tube today, I had to get off and wait for the next one. pic.twitter.com/7IZVR4TQcw

Delivery guy: Could I use your toilet?
Me: Yes sure it's the door under the stairs.
Delivery guy: Which one?
Me: Erm, the person sized door. pic.twitter.com/DBBpYiUC1W 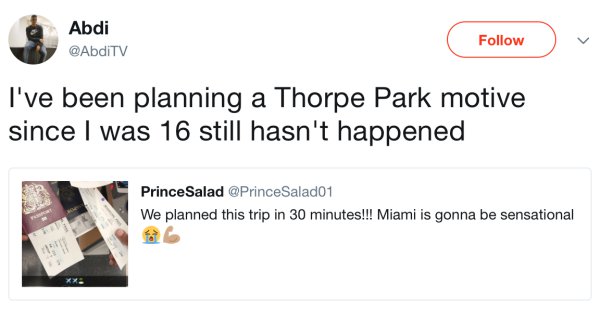 Customers just asked me what perfume I've got on, didn't have the heart to tell her I'd febreze'd myself so I said it were Marc Jacobs ffs

when your nan brings the biscuit barrel out.. pic.twitter.com/YpSA3AV7qh

WIFE: This is for a tweet isn't it… pic.twitter.com/IdmJSTDtnf

Someone has got to be editing his head because I refuse to believe it's that disproportionate pic.twitter.com/saIPC8GT56

Feel like pure shit just want her back pic.twitter.com/MvxUaqYLLA

I'm begging of you please don't take my man pic.twitter.com/rFkRMFhdkl

Someone is taking gear in the boys toilets "not a problem leave it to me I'll check" pic.twitter.com/J4RRj1rV5H