The Craziest Wi-Fi Names And Passwords

A few years ago I entered a coffee place in Saigon and asked for the wifi password. The cute waitress answered, with a smile:

- Do you have a girlfriend?

I thought she misheard what I asked, so I replied:

1 month later, they changed it to something more obvious:

“Can I have your number?”

This used to be the case in the previous apartment I used to stay in. Sweety was our neighbour’s hot daughter. There was this other neighbour who found a cunning way to communicate. He kept his Wi-Fi name as “In love with next door sweety”. And Sweety’s Mom’s comeback was epic. Still cracks me up. 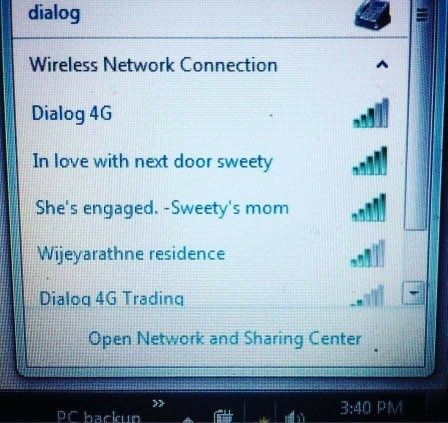 My favorite from a coffee shop in Vietnam:

My home wi-fi has, for several years now, been “FBI_Surveillance_Van”. The neighbors tend to avoid trying to use it.

Once I asked my guy friend for his WiFi password. He was single and in need of a gf . When I asked he simply told “please be my gf”.

He said, “No dumbo that’s my WiFi password – plzbemygf .”

If you ask for my wi-fi password, I will curse you out and tell you no f*cking way. When you look at me a little dumbfounded, I’ll add “That’s the password.” Never fails for both a shock and a good laugh.

Although, when my in-laws come over, I tell them “It’s complicated. I’ll just type it in for you.”

Waiter: ask my boss (with a smirk)

Then, he left with a big smile on his face.

I moved into a flat about 2 years ago in Prenzlauerberg, Berlin. One of my neighbors had a wifi named “iCanHearYouHavingSexAtNight”. Another neighbor had his wifi as “comeAndJoinUsNakedBringBeer”

Not crazy, but certainly funny.

I was visiting my uncle’s house and asked for the WiFi password. He replied, “I don’t remember.”

I persisted, but he kept on saying, “I don’t remember.”

I figured it out after a while. I typed in “idontremember” and it worked!

Once I was at a hackathon and unfortunately the Wi-Fi wasn’t that great but someone had a hotspot with the name, wait for it, “YellPenisForThePassword”. At around midnight someone seemed to have had enough of the not so good Wi-Fi provided and yelled “penis”.

Most Americans Would Take Less at “Just” Company
15 People Who Know How To Handle Awkward Situations In The Most Hilarious Way
20+ Times School Was More Exciting Than A Crazy Party
What would the average single guy do if a girl falls asleep on his shoulder?