RT if you are also tired & ugly and just want to sleep pic.twitter.com/CoymvKLi8p

Me: Have an early night sleep

Inner me: Keep refreshing all your social media for no reason at all pic.twitter.com/k0xKOEWGGx

I'd rather crank the AC to 50 degrees and sleep with 5 blankets than have it be hot. Don't @ me

Therapist: so tell me why can't you sleep at night?

Me: does mike wazowski blink or wink?

tfw you get a solid 4.5 hours of broken sleep and have to pretend like everything's okay pic.twitter.com/I2fElOGYIe 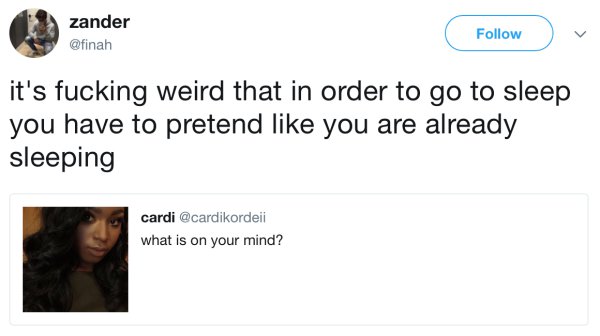 13.
WHO NEEDS MORE THAN FOUR HOURS OF SLEEP WHEN THERE’S CRIPPLING ANXIETY TO KEEP YOU ENERGIZED?
@ unequalized

Can't sleep and it's an hour before I have to leave for my flight. Should I…

My wife just goes to sleep when she gets tired and it's the most impressed I ever am by anyone doing anything.

Getting a full 8 hours of sleep. https://t.co/fNh8Z2sOeQ

How I wake up when I sleep with the heater on pic.twitter.com/huzzXn1lCc