20 Tweets From This Week That Will Have You Screaming

Ever wonder if the bank looks at your account and thinks 'Wtf is this person doing?'

The back to school pics of kids in front of the door have started pic.twitter.com/ptRLjQLzdS

when someone tells my pet to shut up pic.twitter.com/ti0ymucKeD

No sign has ever encapsulated my life more than the one this woman is wearing pic.twitter.com/eWFVita7Dx

***arrives to work sweaty and out of breath***

I beat her. I beat the girl who was trying to walk slightly faster than me.

that motherfucker really put on pants just so he could moon his computer. bold, and also iconic pic.twitter.com/KOqVbqnYvk

me overthinking how I said "here" during attendance pic.twitter.com/YEx9saFzqz

I, too, casually arrange photographs of my 100 children to face outwards so I can only see the backs of frames pic.twitter.com/Pa0cHP5ayj

"I'LL SMACK EVERYBODY IN THIS BITCH!"

reminder that this is what Betsy Devos's house looks like

Architect: what kinda house u want?
Betsy: Just fuck my shit up pic.twitter.com/HoY6Xe2TRl

INSOMNIA: Surprise! You're awake now.
ME: *stares impatiently at clock*
ME: well this is quite boring
ANXIETY: Allow me

What's the point of being able to paint if you don't use your work to honor legends? pic.twitter.com/ew5KSDc1zJ

me when my friends pay for my meal pic.twitter.com/wYhuC4AmLq

did she really think this was deep lmao pic.twitter.com/njYyV4ypOb

When u look in the mirror at the club drunk and u realize u a snack pic.twitter.com/Cszmg5FwkX

Is my popcorn supposed to sound like this when I microwave it? pic.twitter.com/Sdk5ri5v2c 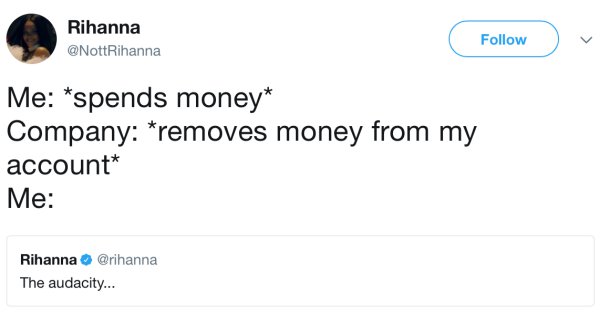 10 to 2 at the club pic.twitter.com/QqkwjklFRY