18 Tweets About “The Sims” That Will Make You Snort-Laugh

playin the sims stresses me O U T !!
one second you're tellin jokes and high fiving, the next you're married with 3 kids and can't pay rent

8.
Some video games are awesome. You can try out your deepest, wildest fantasies. For example, on The Sims you can have a job and a house.
@notmargot663

been flirting with this guy all night and turns out he has a fiancé who's gonna move into my mansion now ??? the sims stresses me out man

"been really into gaming lately :)" – me, after trying to get my sims character to fuck a lamp for three weeks

"Why are you single?" pic.twitter.com/1Aqdw92XmS 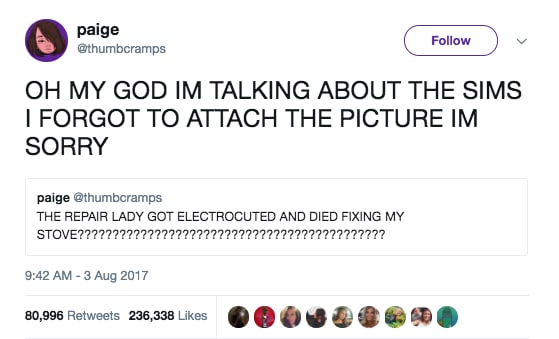 When your baby's been going hard in the gym pic.twitter.com/AC27lVa7Lz

okay but who did this… lmao pic.twitter.com/MkTkZHPuCp

a hotdog dreaming about being on a plate pic.twitter.com/thSIqZqfoH

Me: look at all my sims in the pool

Inner me: delete the ladders pic.twitter.com/UULsZBIPt3

"katy perry doesn't have any talent" ok,, sweattie, then explain THIS pic.twitter.com/Z6WaHnGlpv

I Write Sims Not Tragedies pic.twitter.com/3CWfZloGaq