20 Tweets That Will Make Any College Student LOL

High school teachers: I'm MRS. HARDASS and you will take me SERIOUSLY

College profs: what up I'm Josh and class is cancelled cuz I'm tired

Me setting my alarm for every 5 minutes in the morning pic.twitter.com/TjCBc9hPcY

College: "oh look it's 1 AM, I should eat dinner soon"

'everyone at university is in the same boat, don't worry' pic.twitter.com/M7CMaJ4k6R 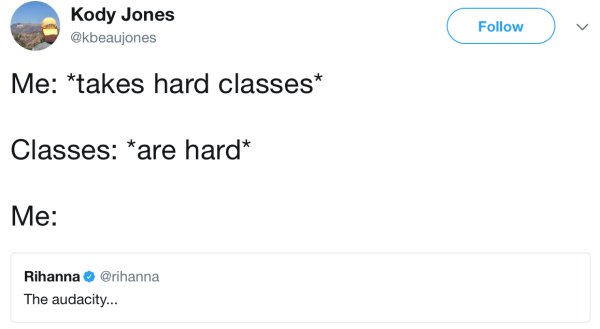 The 4 stages of a morning lecture pic.twitter.com/TvKfXj9Ta1

Wait…Did you really think we were gonna pay for your college tuition? Well you're wrong. Never judge a book by its cover

me overthinking how I said "here" during attendance pic.twitter.com/YEx9saFzqz

In college "Hey mom I just ate a sandwich just wanted you to know. Wyd? Miss you. How's the dogs?"

roommate: " try to not make any noise when you come home late"

*Me at 3am looking for a bottle of water* pic.twitter.com/QVWlr3FVB4