Hate when people don't believe my exaggerations. Like, yeah I did wait 7 weeks for the bus once just fuck off.

every morning I ask the dog "the usual?" before pouring her food into her bowl & neither of us thinks it's funny but that's showbiz baby

[restaurant owners meeting]
"we should start asking customers if they've been here before"
why though?
"absolutely no reason at all"
ok deal

what's up with this dramatic movie poster font choice. how many did he kill on his first day pic.twitter.com/yrni6PsdMg

Me: I think my computer's broken

Boss: just give it to the IT guy

Me: okay *walks outside and tosses my laptop into the sewer* good luck

Before u leave the house, think of the acronym 'WOWEE'

Chocolate digestives are the unsung hero of the biscuit world, no in it for the fame, just keeps its heed down and does the job 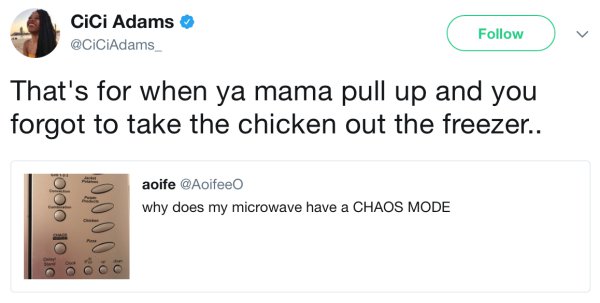 while I respect Dracula's abilities, I can not condone his actions

The rest of the day after someone calls you cute pic.twitter.com/aCaPdu8Ied

Widow: "Thank you. That means a lot."

if my dick small, that's our business. don't bring it up while we play monopoly with my mom, its not my fault you can't manage your money

so disappointed after seeing this photo & realizing that's a third llama in the back & not the arm of the right llama ringing a little bell pic.twitter.com/LM1yhbkW0M

"Orion's Belt is a big waist of space."

when someone RTs the tweet you tagged them in pic.twitter.com/h7y3Y1uKok

Hate when people don't believe my exaggerations. Like, yeah I did wait 7 weeks for the bus once just fuck off.

Me setting my alarm for every 5 minutes in the morning pic.twitter.com/TjCBc9hPcY 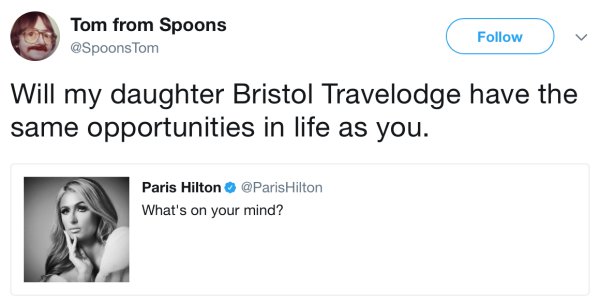 Me thinking about a joke I told last week pic.twitter.com/HQiuKXvJUW

Imagine trying some boots on in topshop and turn round to see a lady walking up and down in YOUR sandles..FUMING

TFW u fave shady tweets from a twitter argument you're not involved in at all pic.twitter.com/J1QpaV3BLg

I told my girlfriend I wrote her a poem but it was just the theme song to King of Queens. pic.twitter.com/2B1H6n7XtX

I have several questions. pic.twitter.com/ikqFh8dtaw 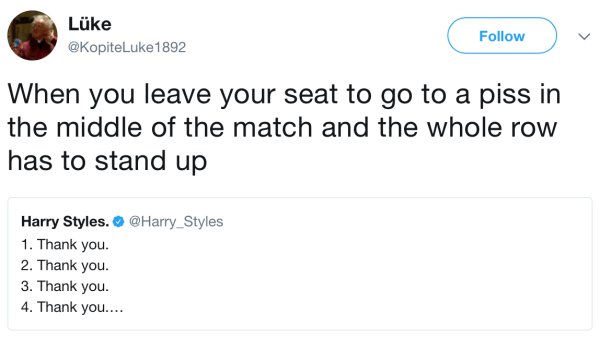 stephen king when he found out millennials wanna fuck a killer clown he created initially for people to fear: pic.twitter.com/fYkooT03aP