16 Of The Most Hilarious Tweets By Women This Week

Wait. Why is it called ghosting? Ghosts stick around. THAT'S THEIR WHOLE DEAL.

How come when a house is 'haunted' its always a ghost from the 1700s? imagine a ghost from 2007 screaming "ITS BRITNEY BITCH" at 3 am.

Just realized Gotham has no plan for signalling Batman if there's a daytime emergency.

babyboomer: IT is terrifying, Pennywise haunts my dreams
millennial: yas god send me down in that sewer 2 my misery. I wanna bang the clown

All apps are dating apps if you're online enough

in this horrible time, let us at least be bolstered by small miracles like finding out your ex moved to a different city

Wait. Why is it called ghosting? Ghosts stick around. THAT'S THEIR WHOLE DEAL.

me on a bad day pic.twitter.com/CxTJcFuuMa

i can't believe i ever hated working one block off of Times Square, you can smell ANYTHING here

i pray for death pic.twitter.com/PZ7ljUdGFW 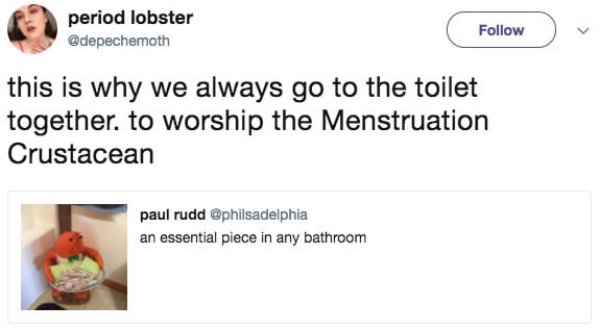 Weird I thought she was just "walking" pic.twitter.com/I2R6Mc7KNG

just guessing but i think this box is a pisces pic.twitter.com/qClKTWFWD8