Get you an upgrade, sis.

Your MCM pops bottles at the club then calls the bank in the morning to say his card was stolen.

Ladies, your MCM trusts his barber with a straight edge razor against his neck but you believe y'all not dating cause he has trust issues.

Your mcm has a license but does he pic.twitter.com/G567KUCRKq

Your mcm says "it's not even like thaaatt" when a girl reminds him he has a girl. Stay blessed beloved.

Your MCM calls popular girls and puts them on loudspeaker so his friends will believe he knows them. He's in his early 30s.

Your mcm listens to Future but doesn’t have one

Your MCM is gonna be at the club before 9 today to get in free. After the club closes, he's gonna ask "Where's the next party?" He's 29.

Your mcm still refers to you as "that chick from the party" to his friends. Focus on yourself.

Your MCM pops bottles at the club but his steering wheel shakes aggressively when he picks up speed to merge onto the interstate .

Your MCM whispers '123 go!' to himself when he's about to shower with cold water. Ya it's me, your MCM. 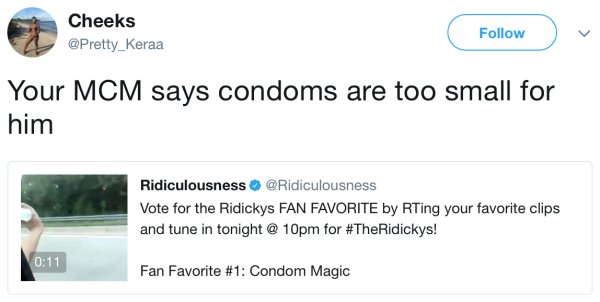 Your MCM asked to hold the whip while you at work you said yea just don't bring it back on E. He sucked his teeth and said nevermind

Your mcm can't use the toilet without pissing on the seat.