20 Science Tweets That Will Make You Say “Wow”

The dinosaurs didn't 'rule the earth' they were just alive stop giving them credit for administrative skills they almost certainly didn't have.

Just realized: your fingernails grow at the same speed at which continents drift. Imagine traveling across the Earth at a nail's pace. Wow.

Science is tricky. Keeps you on your toes.
Mineralogy? Study of minerals.
Oceanology? Study of oceans.
Meteorology? NOT ABOUT METEORS.

This carrot looks.. as if it wants to be an astronaut so badly pic.twitter.com/AUKIMPF6nT

"Orion's Belt is a big waist of space." 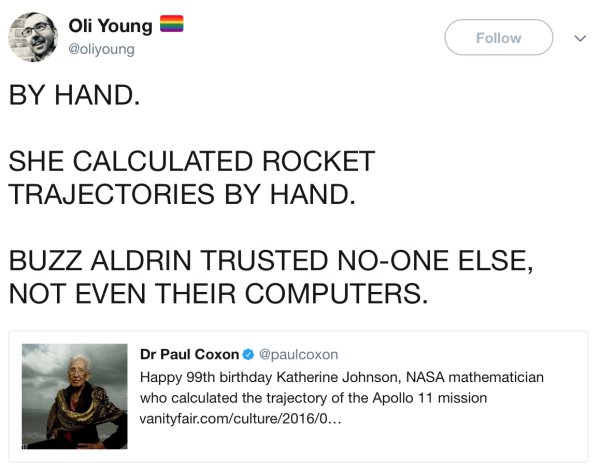 This Fibonacci joke is as bad as the last two you heard combined.

The reality is, a vanilla soy latte is a type of three-bean soup.

Proof by Clementine: the surface area of a sphere is 4 pi r^2 (trace around widest part of clementine 4 times) pic.twitter.com/Bxj2v6wpAO

btw, the best statue in the world is the monument to rats used for DNA research in Russia pic.twitter.com/NEEY9qbCOQ

This is a very important general point: people are far too inclined to believe that a crisis averted was never a crisis at all. pic.twitter.com/vuJNvid0Bb

him: which die hard film had the chemicals
me: everything is chemicals
him: *just the longest sigh ever*

Land: Okay, there's like 4 basic shapes and everything is pretty much that.
Water: I MADE A MONSTER FROM FEATHERS AND MOTOR NEURONS pic.twitter.com/krUC5hFof7

two of the deeply weirdest things you've maybe never seen are jupiter from above and below pic.twitter.com/xCscqmatqF