me: pls cure my depression

me: *stands up*
my dog: oh word? where we going? pic.twitter.com/H8vJqWArx3

when you ask your dog wtf they're eating and they start chewing faster pic.twitter.com/1MCpGHTJDu

every morning I ask the dog "the usual?" before pouring her food into her bowl & neither of us thinks it's funny but that's showbiz baby

5 things i want in life:

Interviewer: u worked in sales before?
Me: yeah
Interviewer: what's your background?
Me [gets phone out]: picture of my dog eating spaghetti

i put my dog in a shopping cart!! he hated me so much after this he looks so mad at me my poor baby lmao pic.twitter.com/GJiwFpfZdn

so my pal's dog had a birthday party pic.twitter.com/qaWcV8ALqw

Teacher: Why are you late today?

Me: My dog wouldn’t let me get out of bed… pic.twitter.com/oKOHKErPQz

This is my dog realizing hes fting with me & my family because were away on vacay and look how happy he got. pic.twitter.com/ywXpE651iQ 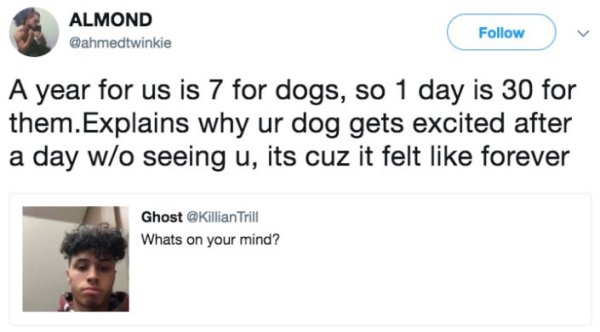 Now that I have a gorgeous dog I understand the tragic moms who put all their hope into their pageant daughters & discard their own beauty pic.twitter.com/lSocCnfBhx

employer: why do you want a job here?
me: so i can provide for my dog

My favourite subset of internet video is dogs that think their owners are drowning and this one is gold pic.twitter.com/Yiv2MMZHFt

Owner: *pretends to throw ball*
Dog: *runs after it, comes back*
Owner: *takes ball from behind his back*
Dog: pic.twitter.com/WzqMYPvFyG

Animal Testing: Banned in Europe, Required in China
What Was The Weirdest 911 Call Ever Received?
These Are The Most Popular Disney Tattoos In The World
The Only Female Medal of Honor Recipient