22 Relationship Tweets Guaranteed To Make You Laugh, Cry, Or Both

How exciting, another closed door.

if my dick small, that's our business. don't bring it up while we play monopoly with my mom, its not my fault you can't manage your money

me: *double texts a boy who left me on read*
government agent who reads all my texts: oh i see she's back on her bullshit again *sigh*

“Why you ain’t text me back”

First of all experiment 623 you’re not my man, relax.

" Without Uber, these girl's are going to want to stay over. "

First of all, you own a single bed and that's your mother's house.

Me planning our future after someone looks at me for a whole second pic.twitter.com/7XVDjutJTR

He doesn't text back.
He breaks promises.
He doesn't instigate conversation or check on you.
He only messages when he needs something.

when you text them goodnight cause they taking too long to reply and they reply night in 0.03 seconds pic.twitter.com/qBto7yub8t

So this morning I was hanging out with my boyfriend and he turned to me and said "who do you think will get married first, me or you?" pic.twitter.com/wvZR1GxgWO 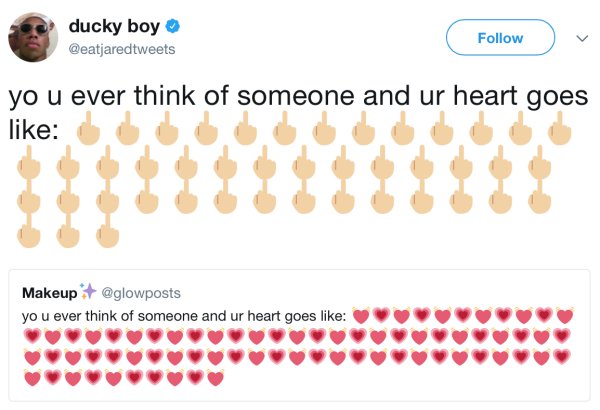 there's a really average looking emotionally unavailable guy down here that will probably ghost you in two months pic.twitter.com/9B00sW1FfJ

when she says she only dates good boys pic.twitter.com/c0dR0VqHic

Wanted to share my amazing weight loss transformation with you all. It’s been over a year since I lost 230 lbs and I’ve never felt betterpic.twitter.com/fuw5PQWdcC

You know his girl texted him "have a nice life liar" pic.twitter.com/9SL35fgRBM

trying to give my ex another chance: pic.twitter.com/me05zseS4R

Me waiting on my DM after I liked two of his pictures pic.twitter.com/v34xduuEUg

When u finally meet ur soulmate and the world just out here ending and shit pic.twitter.com/PDD6dUEutz