1.
I was with my first serious boyfriend for almost four years and we had planned our life together, went ring shopping, and had everything laid out in front of us. He suddenly broke up with me just months before I thought he was going to propose. I was devastated. 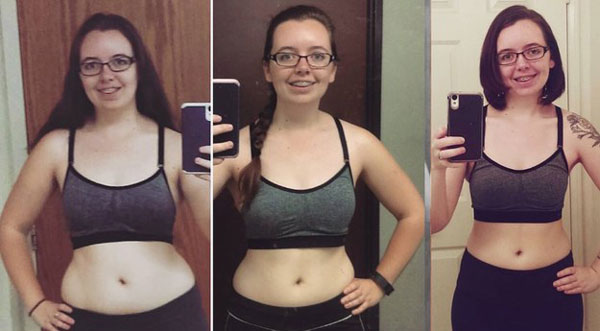 Image Credit: elizar4fbc626f8
But when he started dating someone new I had this moment where I realised I needed a new outlet because I’d planned my future around him and hadn’t focused on me. I started working out and threw myself into my schoolwork. From November to May I lost 30 lbs (13.6kg), could actually run 5km, graduated with honours from university, and had a job offer. But most importantly? I discovered that I am incredibly strong, fiercely loyal, brilliant, and kind – and none of that is dependent on another human. I learned to love me, which is the greatest lesson anyone can learn. I learned I can do anything and it was entirely his loss the day he broke up with me.
elizar4fbc626f8

2.
I dated a drug addict/alcoholic for three years. I didn’t realise how much better life could be after our relationship ended. I didn’t want to ‘start over’ finding a partner in my early 30s but I did, and I found my person, who is so much better.
Marley, Facebook

3.
I was dating a guy for about a year and it was a very emotionally confusing relationship. One minute he wanted me, the next he didn’t. He would tell me he didn’t want a girlfriend so I would distance myself and the minute I did, he came running back. The ups and downs turned me into an anxious wreck.
I blamed myself for our breakup because I felt like I wasn’t this perfect girl anymore. I’d started acting like an insecure, whiny person because I didn’t trust him anymore. I hated being that girl. I blocked him on EVERYTHING the second we broke up and haven’t looked back. It’s only been three months but I’ve gone on several weekend solo trips (hiking especially), I’ve surrounded myself with friends, I’ve gone back to therapy, and I’ve gotten back into the gym. Essentially I’ve started dating myself. I’m still hurting a little bit but I’m learning SO MUCH about myself and I’m finally learning to be happy alone.
Jael, Facebook

4.
When I met him, I was someone who had no idea who I was. I was a doormat and made him my entire life. When he ended it, I was suicidal and had panic attacks just by going down the street. I could not leave the house alone.
I survived it, though I never thought I could live without him. If I stayed with him, I would have never travelled to Antarctica which changed my entire life and who I was. Now I am a confident, outspoken, and adventurous 33-year-old who is content with being single.
I do not regret that relationship at all. In fact, I am glad it happened because I was not even living before I met him.
Eliška, Facebook

5.
I recently ended a 10-year relationship with a man, and we have a beautiful daughter together. While the picture seemed nice, something was off. I gave more than I was given, and it hurt.
I started a new job at the same time as another coworker. For nine months we built a friendship (and hid overwhelming feelings) until I couldn’t wake up without dry heaving and I had an eye twitch that lasted five months. I decided to stop hiding my feelings and she stopped hiding hers. I guess what I’m saying is, the best thing that came out of a very sad breakup is the fact that I’m 100% out and 100% me for the first time ever. I value what I learned in 10 years, but this breakup taught me stop hiding and to embrace what I really want and who I really want.
Erika, Facebook

6.
Right after my breakup from my long-term college relationship I took my feelings of rejection, heartbreak, and general lack of confidence, and channelled all my energy into doing things that would make me feel proud of myself. I stopped saying ‘I’ll apply to grad school some day’ and actually bit the bullet and applied. I focused on my mental and physical health through yoga and meditation and overall just showed myself that I can create my own happiness.
During that relationship, I was so ‘in love’ and comfortable with that being good enough that I didn’t push myself to actually achieve any of my dreams and create my own happiness.
Now, I am in a wonderful relationship that is endlessly more fulfilling not because of the happiness that the relationship brings to me and my life, but because of all of the happiness in my life that I can now bring into our relationship.
Roxana, Facebook

7.
It took years of being in two bad relationships for me to fully appreciate how great it is to be with a genuinely nice guy. It’s crazy looking back on how poorly I was treated and then comparing it to my relationship now. At the time it was easy to think that those bad relationships had the potential to get better when deep down I knew they wouldn’t. Weirdly enough those bad times did make me open to seeing what great guys were actually out there. After two years of dating, I’m now happily engaged and can’t wait to spend the rest of my life with someone who loves me for me.
camilled4135f0fa9

8.
I spent so much time trying to be the ideal person for my ex, that I ended up completely losing myself. We broke up, it was horrendous, and I was pissed at myself for not being ‘good enough’. I promised myself that the next guy I dated, I would be 100% myself, for better or worse. Well, the next guy dug it, and we’ve been happily married for seven years now!
Rachel, Facebook

9.
My ex-fiancé breaking up with me five months before our wedding encouraged me to go after what I wanted. Since then I’ve been promoted at my job and learned how to love my body and natural hair. I also have friends for the first time in years. Blessing in disguise!
jasysuperstar

10.
I dated a manchild but was too afraid of uprooting my life (we lived together) and accepting ‘defeat’ to break up. He broke up with me, I moved out, and a day later I was called to reserve duty to serve in a war that had just broken out in our country. It was the wake up call I needed to look around and realise I wasn’t maximising my life. I decided to take my studies more seriously, and apply for grad school in the US. I got into a fucking amazing PhD program where I’m developing amazing research, and I’ve met a partner who is super supportive, unlike that dickhead.
mayak49e5e5bc4

11.
He dumped me and we took almost an entire year to finally have a clean break. It was immensely hard at first but I realise that was also because I didn’t have friends. After it ended, only then did I realise how unhealthy our relationship was. I came up with a list of things I should work on for myself, things I want to look out for in my future partner, and things I hope to work on as a couple. I learned all the things I do not want in a partner, and in a relationship because of him, and it was a painful but enriching experience. I rediscovered myself and forged many new friendships. The best part was, I ended up embracing my sexuality. I am currently in a relationship with a girl!
licylee

12.
Recently I went through my first ever breakup. I cried for a couple of weeks straight. It took time, but it hit me that I was a complete mess, my place was a mess, and basically everything in my life was a mess. I relied on people for everything, even for love. So I started meditating, decluttered everything, painted my room, got rid of stuff I didn’t even know I had or needed, and learned to take care of myself and my surroundings.
alyzhonc

13.
My boyfriend (at the time) and I were trying for a baby… and he dumped me when I was 14 weeks pregnant. I was devastated and terrified. It was a really rough pregnancy with all the emotional trauma, and I still have a rough relationship with my ex. However, my life has been amazing since. I moved back in with my parents and we’ve never been closer! They are amazing to have around my son. 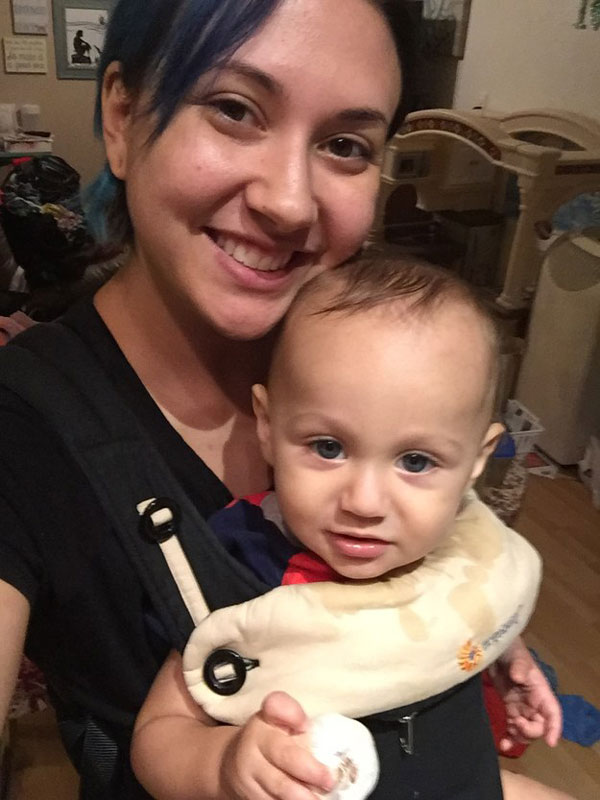 Image Credit: laurenb90
I’ve reconnected with so many old friends. I’ve even started my own business! I’m the happiest I’ve ever been, and I’m finally figuring out who I am and what I want in life. Yes, being a single mother is tough but it’s been amazing being surrounded by love and support and not dealing with drama on a daily basis. If anyone’s going through a rough breakup right now, hang in there, it gets better!
laurenb90

14.
I dated my college boyfriend for three years. Two-and-a-half years in, I knew the relationship was dead but didn’t know how to be an adult without him. When we eventually did break up it helped me realise what was actually important to me and what I wanted in my life. He didn’t like my family much, or my religious beliefs, so if we had ended up getting married I would have had to give up both and that realisation hit me hard. If I hadn’t ever had those things threatened I don’t think I would have the familial relationships I have now or be married to my amazing husband.
larsmm

15.
My breakup was the final push I needed to move to a new city and start fresh! Three years later I have a new group of friends that I can’t imagine my life without, a new job that is setting me up for a legit career, and I found how to be happy by myself. As a bonus, there’s a new guy in my life and the connection we have is unlike anything I’ve ever experienced.
abigailm4f996815e

16.
As cliché as this might sound, I realised that I could do better. It was one of the first relationships that I put my all into and really tried to make work. I soon understood that nostalgia had a way of making things seem better than they were. When it finally ended I saw myself differently. When you go through a relationship that tests your very being, you find out so much about yourself and what you’re willing to put up with. I realised that I’m a fucking gem, I will never settle, and I will not be held back.
giaalexiag

17.
My breakup was the eye-opener I needed. After my ex and I split after four years, I graduated, fast-tracked my career, moved to experience country life. The best part was I found who I am, and fell in love with myself. I’m with someone who appreciates me for that and who I’ve become. I learned the best lessons from that breakup despite how difficult it was at first.
jbrobe2

18.
I leaned on my ex for everything, including my mental health. When he broke up with me it forced me to take responsibility for my own happiness and health. I was able to seek the help I need and I’ve never been happier. The breakup was the best thing that ever happened to me.
katherines4f2486d33

19.
Shortly after being broken up with after two years, my ex moved on with my roommate and best friend.

Image Credit: leanag3
I channelled the pain into martial arts, and two years later I became an instructor in self-defense. Currently I’m one belt away from black belt and never been stronger.
leanag3