What’s Unattractive In A Woman?

1.
A guy I know is in a relationship with a woman who is constantly belittling him and putting him down in a “just joking!” manner. He always laughs it off but after the 3rd crack about his “micro penis” in front of his friends, the joke gets old. I don’t think I could date a person like that.
iScoopPoop
I knew a girl kind of like this. Instead of calling her boyfriend (my friend) “honey” or “babe” or his name…or anything endearing whatsoever, she would call him a piece of shit. After he proposed (they’ve since broken up) she literally started crying and was like “oh my gosh you piece of shit!!” Like, we get it, you’re vulgar. But maybe call him something else once in a while.
funkyfreshadelic

2.
The complete and utter inability to manage their own finances. I’ve got enough to stress over in my own bank account. lord_straxus
Even worse if they criticize you for being ‘cheap’ because you’re actually responsible with your money BinkWinkleman

3.
An unhealthy social media presence WilliamHSpliffington
Kind of in a similar vein, the ones that constantly (I mean 4-5 times in an hour) post themselves lip-syncing to some rap song. dezamaan

4.
When they don’t find you attractive AsianHoosier
Fucking cunts the lot of ‘em! Grippler

5.
After college and getting a job, the most unattractive quality I had to deal with was when a woman presses too hard to move in with you when it’s too early in the relationship.
I know you don’t want to live with your parents anymore, but now it seems you are more interested in a relationship with my house, rather than me. RedIcingGuy
To be fair, your house is super sexy. HarrysonTubman
I want to be inside it thehonestyfish

6.
When I’m on a first date, I don’t mind leading the conversation, but I hate when I’m the only one asking questions. I’d love to learn about you, but I’d like to know you’re also interested in getting to know ME. Dmanthebeefman
Exactly! I hate it when it feels more like an interview. JackalAbacus

8.
tells her friends everything. I had an ex that showed her friends nudes Id sent her. then said friend messaged me about said nudes. It was like being in a relationship with an extra person er_meh_gerd

9.
An ex of mine was nice, and we hit it off fairly well. But, she was scared of everything. At first, I didn’t mind, I was supportive and tried to help her get over her fears. But I eventually started getting tired of it. Part of me still believes to this day that she isnt really a scaredy cat, but only used it to act “cute” and make me be the “Big Supportive Protector Man”. Just, how quickly she’d switch from “nervous wreck” to “doesnt even bother to check traffic before crossing” just bothered me.
I mean, what she was scared of ranged from lakes to rocking chairs to “spooky nights” when its 4 in the afternoon in summer. Maybe I am an asshole, but I truly believe she would act scared whenever she wanted attention/to get close. I don’t know, I hope I wasn’t being a jerk.
Lamplorde

10.
To much make up and orange face white neck syndrome. Omipony
man I’ve said this a few times. How the fuck do they not look in the mirror and see their neck and face are two entirely different colors that meet perfectly at their jawline?? RamblinMan87
Indoor bathroom lighting, and the rest of the world lighting is two completely different things in the makeup world. Misstrubation 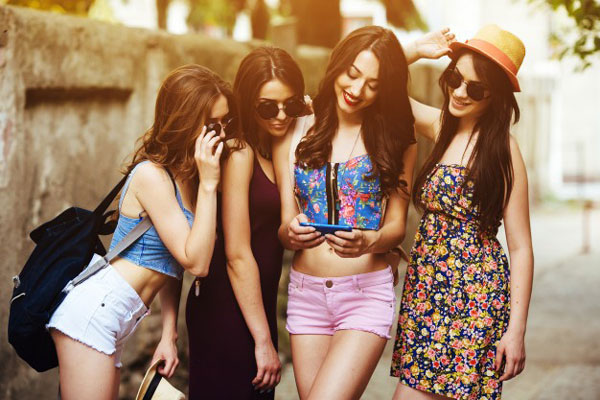 13.
Unwarranted arrogance or unnecessary narcissism. Like, yeah, you’re hot, but definitely not hot enough to have that kind of attitude. Ladies like that can fuck right off. Cyanide_Sunrise

14.
an inability to hold a conversation Blackbox

15.
Physical abuse when your man doesn’t do something you like. Punching, slapping, hitting. It’s not ok for either gender involved, but I see a lot of women get a pass on this.
My brother recently got out of a 3 year relationship because his gf beat the shit out of him and all he could do was cover himself and not hit back. Police were called because she was screaming so loudly and he was bleeding everywhere. And when they took them back to the station, it was the classic “what did he do to deserve this?” And “ you shouldn’t press charges, it’ll ruin her life and she was just emotional.”
Otherwise, just be a friendly person, stick to your values, and don’t be an asshole!

Edit: To be clear ladies, I’m not saying that you should avoid physical interactions with your crush/bf/S/O/whatever. Getting physical is encouraged. Getting physically abusive is not. I think most people can gage when playful teasing turns into painful punching. However, everyone’s boundaries are different, and if you’re worried, talk to him. Even if he thinks it’s funny that you bring it up, he’ll appreciate that you care how he feels about these things.
On the flip side, guys, if it bothers you, say something. It’s cool to act like the tough guy that doesn’t mind, but if it hurts/annoys you/makes you feel bad then say so. Most girlfriends aren’t out to tear you down, and if they respect you they’ll respect your wishes. I brought this up with my gf, and she genuinely didn’t know it annoyed me. All it took was a quick conversation, and problem solved. If things don’t change, talk to friends,family, authorities. Find help.
Have fun, be safe.
onlinePredator