1. Wearing white wedding dresses wasn’t initially about purity or symbolising virginity, but about symbolising wealth, because a white dress was so hard to clean, the insinuation that you’d only be wearing it once was a sign of luxury.

2. And white wedding dresses only really became popular after Queen Victoria wore one.

3. The largest wedding bouquet ever was over 197 feet long and used 1500 flowers.

4. Stag dos (or bachelor parties) have gone on in some form for thousands of years. In Spartan times there was thought to be a tradition of celebrating the groom’s last night before marriage.

7. In France, you can legally marry a dead person, as long as you can prove the deceased intended to marry their partner before they died.

8. The worlds most expensive wedding dress is worth $12 million and was made in 2006.

11. Throwing old shoes at a bride and groom as they set off from their honeymoon used to be a normal thing to do! Admittedly it was normal back in the 1800s.

12. Not as many couples have sex on their wedding night as you’d think. In the US a survey revealed that over half of couples don’t, while in the UK it’s over a third.

13. Weddings on “gimmick” days such as Valentine’s Day are apparently 18-36% more likely to end in divorce.

14. In the years before hen dos were a thing, soon-to-be-married women would be covered in ribbons, lewd rhymes, and sometimes kitchen utensils, and then paraded around their workplace before being doused with confetti and escorted home so people could see.

16. The world’s biggest wedding cake was absolutely massive and weighed over 6.8 TONNES.

17. In the 17th century, before wedding cakes were popular, it was common to have a “bride’s pie” instead, which would either be a sweet mince pie or a savoury one with meat.

18. The first solo wedding (where someone married themselves) happened longer ago than you probably expected, in 1993.

19. Honeymoons came about in 19th-century Britain, but were initially “bridal tours” and were only for the rich, so that they could visit relatives.

20. Hawaii is the most searched-for honeymoon destination for people living in the USA. 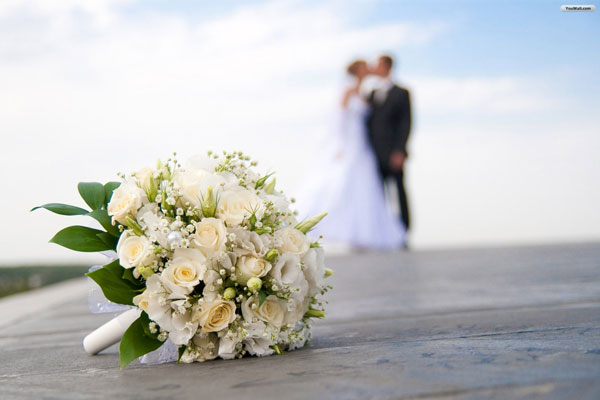 21. And the most popular first dance song last year was “Thinking Out Loud” by Ed Sheeran. Before that it was “At Last” by Etta James.

22. In the Middle ages, bridal bouquets used to have herbs instead of flowers, as well as garlic, which was thought to ward evil away.

23. Before white dresses, people wore whichever colour they wanted although there was a taboo around the colour green which was associated with women of “loose morals” who would “roll around in the grass”.

24. Wedding cakes used to be made up of two parts, a “bride cake” and a “black cake” (which was associated with the groom). Eventually the latter was phased out leaving the bride’s cake, which is what we know as the traditional wedding cake.

25. Cakes that were decorated white were a status symbol, because the more refined the sugar (and the more expensive), the whiter it was.

26. The phrase “tie the knot” is linked back to an old custom of the couple’s hands being tied together.

27. Before confetti and rice were thrown at weddings, in Britain they used to throw wheat, most likely because of its connotations with fertility.

28. Most people used to have single-tiered wedding cakes (as tiered ones were for the rich) so sometimes they’d be decorated with a vase to give it some height.

29. The first “space wedding” was in 2003. A woman married her partner while she was in Texas and he was still in space.

30. For hundreds of years, wedding rings were worn on the right hand and not the left. And during the late 16th and 17th centuries, it was more fashionable to wear it on your thumb.

12 Meme-Themed Costumes That Are Halloween At Its Finest
It’s So Hot In Australia People Are Literally Frying Eggs On Car Bonnets
Does India Have the Most Slaves?
15 Truly Savage Tweets About Kids That Are Hilarious