1.
A psychic once told my mom that her marriage ‘would not end in a divorce.’ She decided to write everything down to see if any of it would come true. She stuffed the note in a drawer and didn’t find it until 2004, just a few days after my dad died. To this day, she remembers the look on the psychic’s face when he told her her marriage would not end in divorce. In her words, ‘I could tell he was holding something back. He knew.’
bellaaac

2.
My mom and her ex-husband had gotten married largely in part because neither of them wanted kids. A psychic told my mom she would have two daughters. My mom wrote her off because she and her husband at the time had decided against kids. But sure enough, she married my dad several years later and had me and my sister!
lisar30

3.
Last December, a psychic predicted that I’d find a great new job around the beginning of the year and that I would get pregnant immediately after discontinuing my birth control. Well, I got a new AMAZING job at the end of January and I got pregnant after having my IUD out for 3 weeks.
lea2008

4.
A psychic once wrote down my lucky numbers on a piece of paper. A few weeks later, I was eating Chinese food and opened up my fortune cookie. To my surprise, the numbers in this fortune cookie were an EXACT match, and in the same sequence to what the fortune teller wrote down a few weeks earlier.
carissaharrison93

6.
When I was a baby and my sister was four, a psychic told my mom that I would always be older. Because of my sister’s intellectual disabilities — which weren’t properly diagnosed until she was an adult — people have always assumed I’m older, and I’ve taken on the role of the older sibling.
asphodelrose7

7.
When I was 18, I asked a psychic if my boyfriend and I would stay together. She told me, ‘He’s yours for now, but not forever.‘ We stayed together for another nine years, but broke up last summer when I found out he was a heroin addict. He passed away from an overdose nine months later.
jennam41e40d4aa

8.
After my grandpa died, my mom went to a medium who said that he had wanted to tell her that he had another child he’d never mentioned. Later, my mom spoke with my grandfather’s second wife and she confirmed it! Apparently, my grandparents had had a child before getting married and put her up for adoption because sex before marriage was a big no-no at the time.
jessd4112ea1fb

9.
I went to a psychic when I was 21. She told me I was going to meet my husband through someone I already knew, get pregnant before I was married, get married at 25, and have twin boys at some point. Low and behold, my best friend introduced me to my husband when I was 22, we got pregnant with our daughter when I was 24, and we married when I was 25. Also, we welcomed twin boys last fall!
laurakate89

10.
When my boyfriend and I went to see a psychic, the first thing she said to him was, ‘Oh, you need a hug. When did your parents get divorced?’ He looked at her funny because his parents were still together. About a year later, he found out that his dad had been having an affair. His parents are now divorced.
shannono4a9d8c341

11.
Years ago, a psychic said that I’d meet someone with blue eyes at some sort of dressy event that wasn’t a wedding or club. Four years later, I had to go to Niagara Falls for a networking event with my company. Everyone was a bit dressed up and I met a blue-eyed hottie. It was like magnets.
suzannel46f36ed04

12.
I had been trying to get pregnant for months with no luck, so I asked a psychic if I’d ever get pregnant. He told me I would in November. I laughed. I found out I was pregnant with my first son on Thanksgiving!
samantham42611b482 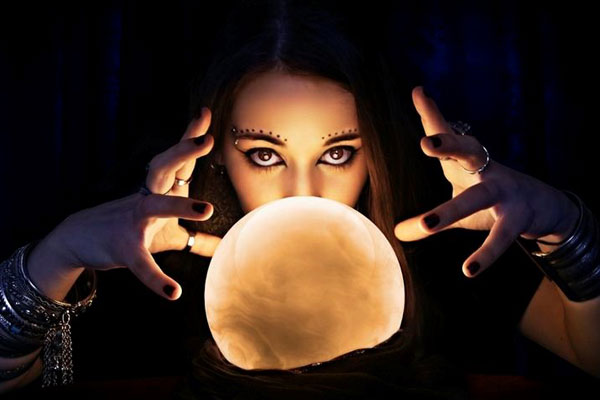 14.
When my mom went to go see a psychic after my grandpa died, I went along with her for moral support. On the drive over, I couldn’t stop thinking about what the Bible said about psychics. I didn’t voice any of this to my mom of course. When we got there, the psychic looked at me and said, ‘I’m sorry but before I go on, I just need you to know that God gave me this gift and he’s totally cool with me using it. You were worrying about that on the way over, right? ‘ I was so freaked out that I lied and said no!
mikaylab4601507ad

15.
My mother-in-law went to a Chinese soothsayer. She got the fortunes read of all three of her kids, and when it came to my husband, the psychic told her that his lesson in this life was to learn from infidelity. I took it with a grain of salt and still married him. Fast forward 20 years and we’re getting divorced because he cheated on me.
jrchan77

16.
My psychic once told me, ‘I hear water in the walls of your apartment.’ Two months later, my apartment burned down because of an electrical fire started IN THE WALLS. It was put out by firehoses!
bridgete4b8da8244

17.
When I was 13 or 14, a $3 psychic at the county fair predicted that I would marry a ‘tall redhead whose name starts with A.‘ For the longest time the only tall red head with a name starting with A that I knew was a guy in my grade named Adam, and being the young closeted gay kid I was, I wanted to laugh and tell the psychic ‘No way!’ 12 years later, my girlfriend is a tall redhead…named Ashley.
kimw46060ca3b

18.
When I was super young, my mom went to a psychic and asked what my sister and I would be when we grew up. The psychic told my mom that I would be a teacher and I literally laughed because teaching was the LAST thing I EVER wanted to do! But sure enough, 12 years later, I’m in my second year of teaching.
lisas4c5c75adc

19.
A psychic once told me that I would never have a wedding. I was a little girl at the time, so I took this to mean that I would never find love. I was upset by this prediction, but she was absolutely right. My husband and I eloped in 2015. Not having a wedding was the best decision we ever made.
emilytaylorv

20.
As I was getting in my car to leave, a psychic from a nearby shop ran out to grab me. She gave me protection stones and made me promise I’d carry them at all times. She looked at my car and seemed nervous before she ran back inside. Three weeks later, I was life-lined from a car accident where I was declared dead on arrival but was later brought back. Safe to say I carry those stones everywhere I go now.
kyleighk3

21.
While I was having my tarot cards read, I was asked if I was thinking about my boyfriend. I said yes, and the reader then showed me The Lovers card. He said we were going to have lots of kids and be in love for the rest of our lives. 25 years and 3 kids later, we are happier than ever!
gottaluvthemonkey

29 Tweets You Wish You Could Send Your Dog
How Many People Are Drunk at Any Time?
45 Of The Most Common “Game Of Thrones” Questions, Answered
China Gets a New Billionaire Every 5 Days