18 Microaggressions That You Won’t Even Believe Happened At School

These stories are just...wow.

1.
As a girl who loves math and science, I honestly have too many examples of sexist microaggressions to share. But nothing will ever top being told, ‘Well, it makes sense that you’re good at science. You’re gay, so you kind of have a male brain, right?’ *bangs head against desk repeatedly*
daisy137

2.
Someone once told me that I only got first chair cello because both my teacher and I are black (and not because I practiced so much that my fingers bled.)
shannonmcallister01

3.
My name is Juan, but one of my elementary school teachers would always write my name as ‘Yoan’ because he claimed it was easier for him to remember it that way. Another elementary school teacher would only call me by my middle name, despite my constantly correcting her and telling her I didn’t like being called by my middle name. And then of course, being Colombian, there’s always all the coke and Narcos jokes.
ajackbrownjb

4.
I️ proposed a GSA (gay straight alliance) at my all girls boarding school, but it was turned down because they ‘couldn’t have that kind of reputation’ and didn’t want to ‘promote those kinds of ideals.’ Needless to say, I️ became very jaded.
annes4ef91c8c4

5.
In my eighth grade social studies, the teacher asked me (the only black student) to explain to the class how ‘my people’ felt during the Civil Rights Movement.
shabbawowo

6.
I’m a non-binary trans man and had asked my college roommate to use ‘they’ pronouns for me. After I kept reminding them over and over, she said ‘Can’t I just call you ‘it’?’
summerbpadley

7.
When I was around 10-years-old, my caucasian teacher would always mix up my name with the names of a Nigerian girl and a mixed girl. We all had different names that weren’t similar to one another. So one day, we all asked our teacher why she kept getting us mixed up. A caucasian student yelled, ‘All black girls look the same!’ My teacher didn’t say anything and nodded in agreement. I was devastated.
savbritton10

8.
My math teacher told me I could never work construction jobs because I’m a girl.
v43ed99c14

9.
My boyfriend was told that he had to cut off his locs for a school production of Carousel because they weren’t ‘period.’” When he didn’t, the director made him wear a hat to cover them.
emilyo407c6f07b

10.
I’m a white English teacher at a school with 40% minority students. I only heard about this after the fact, but apparently the former principal (who’s now retired) would go up to groups of Hispanic students in the hall and ask, ‘What are you doing? Selling tacos?’ *sigh* I’m pretty sure I’ve slipped up and said stupid things every now and then, but seriously?!
chelsean9

11.
I’m Native American (specifically Navajo and Oglala Sioux.) When I was in seventh grade, we were having a Native Spirit Week sort of thing where kids of indigenous backgrounds could celebrate their traditions all week. A white student I’ve known and disliked my entire life came up to me with a group of snickering friends and asked, ‘Where’s your moccasins?’
r4d3406ecc

12.
As a Jewish elementary school student, I was uncomfortable with participating in Christmas and St. Patrick’s Day activities, but was told I’d lose participation points if I didn’t. I was also told that talking about Hanukkah instead of Christmas was ruining everyone else’s holiday cheer.
On top of that, I missed picture day on multiple occasions because it was somehow always scheduled for Yom Kippur (the single most important holiday in Judaism) and was disqualified for perfect attendance recognition because my religious observances were counted against me.
hannahc20 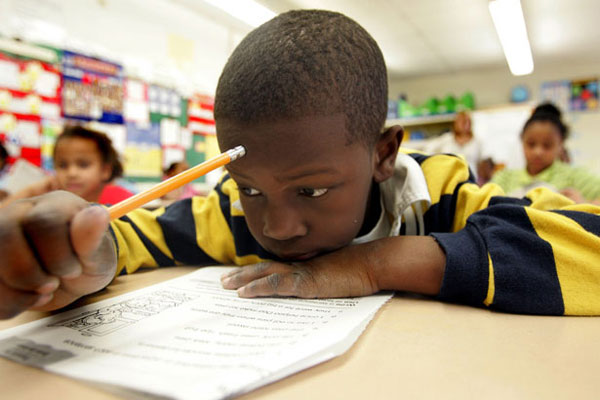 13.
I’m Arab-American and had a teacher who would repeatedly ask me things like why I don’t wear a hijab and what I was doing for Eid. I’m not even Muslim.
graciee4669d4662

14.
My high school would sometimes serve what they considered to be Chinese food at lunch. One day, the lunch lady took one look at me and said, ‘Oh, I know you like eggrolls,’ putting one on my plate without waiting for my answer. I am not Chinese, and I don’t like eggrolls.
mcmargie

15.
When I earned a significant scholarship to the college I was going to, I was told that I was ‘so lucky to be Mexican’ because it meant that I didn’t have to work for my scholarship. It made me feel like my hard work in high school meant nothing.
isabellaf4a6477656

16.
I have a learning disability, and received academic accommodations for it, including extra time on tests and quizzes. My AP Chemistry teacher was walking me down to the place where my extra time was administered and said, ‘Yeah, every few years they let one of you people in. I don’t know why.’
And then he clarified that he did, in fact, mean he did not understand why they let the learning disabled take AP classes at all. (But it’s okay, I got him back when I told him I was going to drop his class because it had no affect on my admission to the University of Chicago.)
greenkyanite

17.
I am physically disabled with mental health issues, so pursuing a drama degree was a challenge. I have to use a wheelchair or a walking frame and I have chronic pain, but I love acting and was determined. One day I was feeling sick and told my teacher who in turn said ‘No worries. We don’t need you around. When was the last time you saw a successful disabled actor, especially in theatre?’ He didn’t see anything wrong with what he said, but it destroyed me. It wasn’t the only thing that led me to a suicide attempt, but it definitely was one of the reasons. Even five years later, it still stings.
Gabriel Davies, Facebook

18.
I’m a black Latina and had just transferred to a new high school for my senior year. After reviewing my transcript (straight A’s) and my ACT score (top 90% in country), my guidance counselor told me that I shouldn’t take any AP classes because I wouldn’t be able to ‘handle’ them. He also said I should strongly reconsider applying to competitive colleges because of the heavy workload.
This counselor was actually known as the super encouraging counselor to all my white classmates. But every non-white student who he advised had experiences similiar to mine.
aishar43b614ce5

19.
It was my freshman year of college and I was sitting in class while my professor spoke about Asia and adoption. And then out of nowhere, the professor says to me, in front of the whole class, ‘Rebecca, you’re adopted right?’ I was flabbergasted and angry, because—ONE—I am not adopted, and—TWO—not once had I spoken with her about any aspect of my family life. Therefore she had no basis to assume I was adopted other than the fact that I am half-Chinese.
After I said I wasn’t adopted, she turned to the only other Asian girl in class (who was Filipino) and said ‘Oh that’s right. You’re the one who’s adopted.’ That student was just as confused as I was because she wasn’t adopted either! Every single student in that room was horrified. This professor assumed that one of the only two Asian girls in class had to be adopted. Newsflash lady: All Asian kids in America are not adopted.
rebeccal4b2690cdb