What Is The Dumbest Pet You’ve Ever Had?

1.
I had a hamster that bit his own balls open and bled to death. So…ya, he was probably the dumbest. magnanimous14
- Got me beat, but I had a parakeet for 10 minutes once I got it home. Opened his cage and he instantly flew into a ceiling fan and snapped his neck. Fuckin Petey… my_whispering_eye

2.
My dad’s fat, tuxedo cat burned the tips of his whiskers trying to eat rocks out of the fireplace.
YoSaffBridget

3.
We had an English bulldog terrier that was such a loveable idiot.
When she was a puppy we brought her out on a canoe; and upon seeing her favorite snack (jellyfish, stingers and all) she decided to jump for it. Sunk straight to the bottom and just looked around on the ocean floor, not panicking at all.. not even attempting to swim. Had to dive in after her.
We had to keep her on a leash in the yard because she would wander off the property and not know her way home. We’d find her blocks away perfectly content but no idea where she was.
Still have a picture of her on the wall with the top of a push-to-open garbage can stuck on her head like a cone
Scotho

4.
I had a cat who didn’t understand “up”. Not like she didn’t understand the command “up”. She didn’t get the entire concept. She could watch a toy go side to side and even down, but as soon as the toy went up outside her field of vision, it ceased to exist for her. Curious_Mongoose
- A cat that can only see in 2D. hello_somebody21 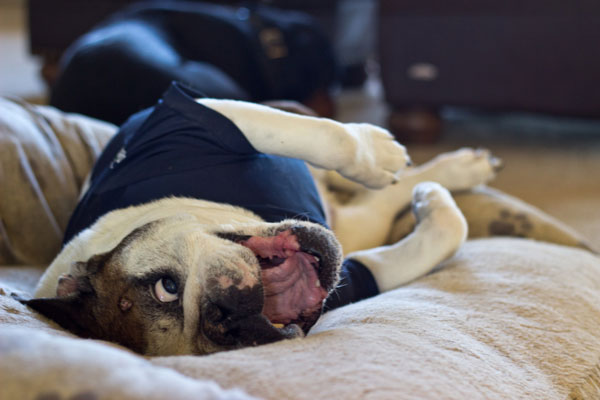 5.
My dog couldn’t swim and proceeded to run into our backyard pond to chase after some geese. He ran back out afterwards, but was literally running along the bottom of the pond under the water
cox0904

6.
I had a Red Oscar (fish) that attacked his tank heater each time it came on. Little red light pissed him off. Well, he grew large enough to break the glass thermometer case against the tank glass and gave himself the death penalty.
Powellwx

7.
I’ve never had very stupid pets. German Shepherds, a Jack Russel Terrier and various cats. But my best friend growing up had one of the stupidest dogs I’ve ever known.
The dog’s name was Shameless. We called it Brainless. And while I didn’t witness most of this dog’s great acts of brainlessness, there are two that stand out.
The dog loved to chase squirrels. We always wondered what would happen if it actually caught one. We never found out. But one day we watched as Shameless chased a squirrel up a tree and was barking non-stop at it. Normal shit, we didn’t think twice until we watched the squirrel jump to another tree. Shameless stopped barking and watched the squirrel jump and lose sight of it in the other tree. Then, he turned and started barking up the first tree. For ten minutes.
The other time I recall was coming back near dark. We were on our bikes, and mine had a light on the front. I was with my friend the entire time we walked the dog into the house and said goodbye. My friend closes the sliding glass door, I flip the light on and then BAM! Shameless ran into the glass door my friend had literally just closed because he wanted to chase my bike light.
Dumb dog.
MishaMcDash