How Much Can Your Life Change in Just One Year?

2013…The year everything changed for me.

I completed my graduation in april 2013 and was placed in Amazon in july. My joining date was July 15th. My sister got an excellent rank in EMCET and was looking for engineering seat in esteemed universities. My parents were supposed to move to Hyderabad and my dad was looking for a transfer so that they can stay with me and my sister. My parents were supposed to move to Hyderabad on Aug 8th and I was making all the arrangements. Life couldn’t get any better for me and then it happened.

Aug 2nd around 8 AM, I was in my office and was in training. I got a call from my dad’s number. I was confused because my dad won’t call me when I am in the office. So I went to recreation area and picked the call. It was a stranger speaking on the other end and he asked “ There is a man here on the road in a pool of blood and this is the last dialled number in his phone, do you know him?”.

That day my whole life changed. My dad met with an accident and he was half paralyzed and it took him an year to even recognise us. All the savings were spent for his treatment. The life I was supposed to have was snatched away from me because a lady was on call while driving.

The last four and half years which were supposed to my prime years just turned into years where I struggled to make sure my dad gets better treatment and my sister gets better education.

My dreams went into a dustbin because someone I do not know and have never met before was not careful while driving. Please drive/ride carefully. Do not spoil a lot of lives being reckless while on road.

A year ago, I had a few thousand dollars in my savings account—the most I’d ever saved up, ever. 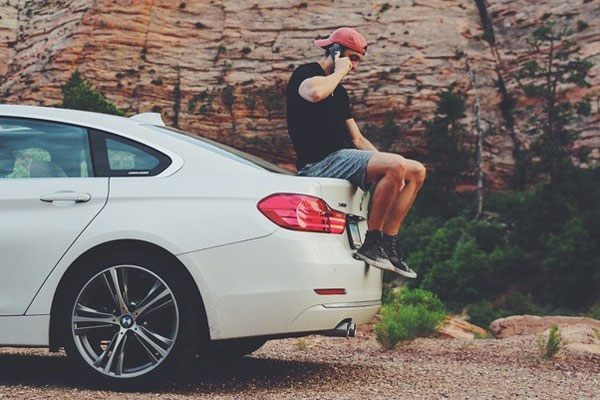 I was living in a studio apartment on the north side of Chicago, working 9am to 6pm at a digital marketing agency.

Every single day, for four years, I would commute home for an hour, standing on the red line train. crammed like a sardine while holding on to the metal bar fastened from the roof. I would smell a homeless man or two in the far-off corner, leaning over himself, drooling. I would hold on tight as the train made sharp turns around the corners. Most days, I wondered if today would be the day the rickety train fell off the track and we all plummeted to the ground.

I would go to the gym for an hour or so, come home, cook myself dinner, and then sit down to work on my book, Confessions of a Teenage Gamer.

On Fridays, I would treat myself to Chipotle.

I couldn’t afford to go out for a nice dinner, nor did I really want to. I wasn’t dating anyone. I wasn’t interested in going to clubs, bars, or any of that. I just wanted to finish my book, and make strides toward becoming a full-time writer.

After 3 and a half years of train riding, 50-hour work weeks, and many nights spent alone writing, I eventually landed a column with Inc Magazine.

6 months later, I was one of their most popular columnists, earning just enough to cover about half my overhead—a mere $2,500 a month. I figured with 8 more hours per day to write, I could find a way to cover the other half.

I decided to take the leap.

I quit my job.

And I published my book.

I just moved to Los Angeles, into my first 1-bedroom apartment ever (I spent 4 years in studio apartments). I just bought my first couch. My first television. My first car—a BMW 430i.

I have my own company called Digital Press, co-founded with one of my closest friends, Drew Reggie.

I went from not having traveled for almost five years to traveling every other week. I’ve been to four different countries this year, along with countless flights to major cities in the US.

My mornings and afternoons are either spent writing, or having meetings with very successful entrepreneurs, CEOs, etc. Most nights, I eat out. A year ago, I didn’t understand how some people ate at a different restaurant every night of the week. Now, I understand. Sometimes it’s out of necessity—more meetings. Most times, it’s because I used to eat plain brown rice, chicken, and asparagus every single day, and I’d like to indulge in something different.

But, in all honesty, the material changes in my life pale in comparison to the personality changes I’ve witnessed in myself.

The kid that used to wonder if he would be able to make it on his own grew up—fast.

I remember waking up so many mornings a year ago wondering when things were going to change for me. I would drink endless cups of coffee, forcing myself to stay awake after a long day of work to continue honing my craft, to keep practicing, to finish my book or Inc Magazine column.

Now, I wake up almost every morning trying desperately to keep up with how fast things are constantly changing.

A year ago, I would see so many people around me enjoying nice things, but paid for them with jobs they didn’t enjoy. My peers would flaunt new clothes, cars, apartments, vacations, all paid for with a career they simultaneously bashed and hated.

Now, I can travel wherever I want, whenever I want, and it’s all paid for from this thing I love: writing.

So much has changed in the past year.

And I feel like a year from now, it will only change even more.

Tagged1: creative, creative skill, diy, do it yourself

The Programmer’s Life
16 Customers Who Made Early Reservations For A Spot In Hell
What Do You Get for Turning 100 in UK?
How Often Should You Bathe?