Why Most Women’s Clothes Don’t Have Real Pockets

The male-dominated fashion industry needs to listen up. And smarten up. Women need, and want, functional pockets in their clothing. No pockets, or faux pockets, just don’t cut it. So say Emilie Aries and Bridget Todd in a recent episode of the podcast Stuff Mom Never Told You.

“I don’t feel like we’re exaggerating the extreme pleasure that pockets on garments — real pockets, functional pockets — give us,” Bridget says. Especially today, when most people tote around a bulky smartphone. Men can stash a smartphone in their coat or pants pocket, while women have to either awkwardly hold it in their hands or carry it in their purses. And women don’t necessarily want to carry their purses everywhere.

Centuries ago, all clothing was created sans pockets. Men and women carried their belongings in small pouches tied around the waist. Then, some 400 years ago, pockets were sewn into men’s clothing, but this same feature was omitted from female garments. In the early 1800s, slimmer silhouettes came into style, so women no longer could wear pockets under clothes but had to wear them over clothes — and their pockets got much smaller. Some say it was a way to keep women powerless. If they had no way to secretly carry items around, it would be harder for them to travel independently or conduct clandestine affairs.

The push for pocket equity began in the late 1800s. The Rational Dress Society, founded in 1891, rallied women to dress for comfort and health by ditching constrictive corsets and donning comfy, useful clothing such as trousers — which, of course, featured pockets. Then, in the 1920s, fashion designer Coco Chanel began sewing them into her women’s jackets. But it wasn’t until the 1970s, when women regularly wore pants, and especially blue jeans, that females moved a step closer to pocket parity. 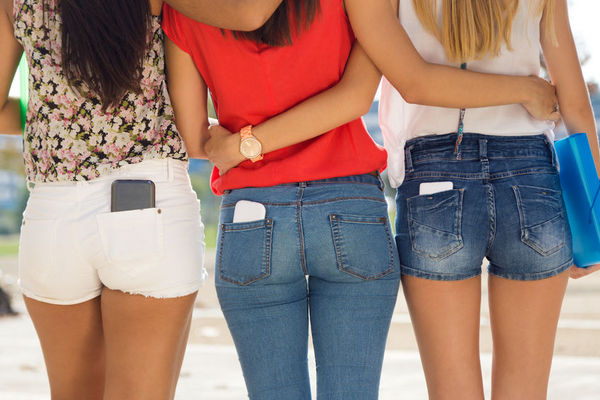 But their progress appears to have stalled. A lot of women’s clothing is still predominantly pocketless, or equipped with tiny pockets that can’t hold more than a key. Some experts say this is due to male dominance in the fashion industry — puzzling in its own right — in addition to designers who believe fashion is more important than function. (Christian Dior is alleged to have said, “Men have pockets to keep things in, women for decoration.”)

Back in 2014, Mashable surveyed five fashion brands regarding pocket size when the large iPhone 6 Plus debuted. Executives said they were considering enlarging the pockets on their women’s pants, but made no promises. Three years later, little has changed.

A few stores are eliminating their men’s and women’s sections and placing clothing by type — e.g., jackets, pants, shirts — and some designers are beginning to create gender-neutral clothing, with presumably big pockets. The Rational Dress Society would likely approve.

Article have been lightly edited for length/clarity.
Via howstuffworks

What does it feel like to go from being wealthy to being poor?
Britain’s Last Witch Trial
18 Photos That Prove Cats Never Get Tired Of Trolling Humans
What’s the most inexplicable experience you’ve ever had?