1.
She attacked the fucking mailman like a full grown pit bull. She was a friendly cat, but something about the mailman pissed her off. We even got a notice warning any further incidents would lead to our house being blacklisted.
FusRoDoodles

2.
My cat the other night was walking around normally but all of a sudden started hopping around in his hind legs frantically. He had hooked his two opposite “thumb” claws together and couldn’t figure out how to get them loose without our help.
Our cat isn’t smart.
poptophazard

3.
I once had a cat that would drink his water from his paw. Like he turned his paw into a spoon, spooned up some water, and drank it tht way. He couldn’t bother to get his whiskers wet.
He also learned early on that if he sat in my mom’s lap when she was eating ice cream, he’d get to lick the bowl clean when she was done. He had to remind her every few minutes that he was still there…So my mom would be having some ice cream, with a giant orange cat on her lap, who would occasionally stick his paw up and boop her on the nose.
fierce_princess

4.
Every day after I take a shower, he fights the bathmat. Another thing he’ll do, is when the garage door is up, he’ll climb on top of it and meow until someone comes to witness his feat of athleticism. After he’s been seen and suitably admired, he’s willing to climb down again. Honourable mentions to the following: my friend Sally’s cat, who steals underwear off people’s clotheslines. My SO’s former flatmate’s cat, who would bring meat home. One day it was an entire cooked chicken. SO’s mother’s cat, who loved nothing better than to roll in fresh cement.
I_throw_socks_at_cat 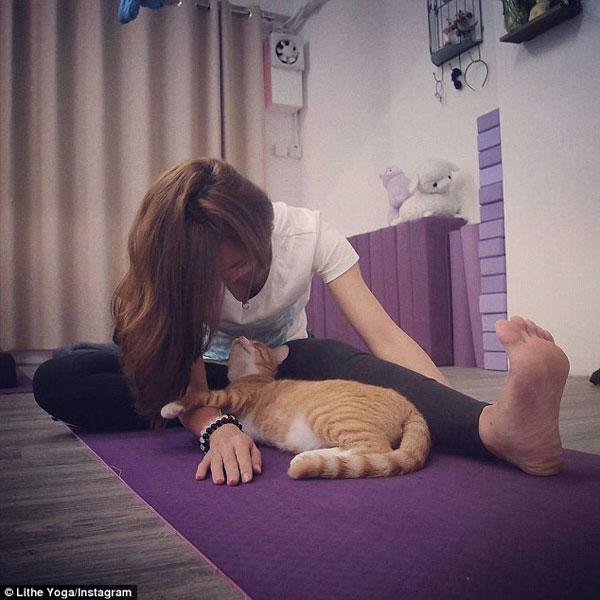 5.
Fall asleep on her head…like straight up yoga rabbit pose for hours.
Dykeydykster

6.
One day when my cat was pretty young, I’ll say 11 weeks, I woke up to her putting her head in my mouth. I was congested that night and sleeping with my mouth open. Woke up to the feeling of a cool breeze in my mouth and opened my eyes to her with her head half in my mouth.
teeksquad