What is The Most Pretentious Thing You Have Ever Seen Someone Do?

You know those ATM receipts that everyone throws out? Some machines provide bank balances. An old friend of mine would rummage through the trash bin next to the ATM to find the ones showing the highest balances. He would save the ones over $10,000.

He would take a few with him every time he went to a club. If a girl asked for his number (and they always did) he would write it on the back of a receipt and hand it to her.

Sadly, it worked every time. They would ALWAYS call.

Ugh. I hated that guy.

I was in the dressing room at Nordstrom’s and I heard an obviously wealthy woman berating the poor salesperson.

She entered the dressing room next to me. She started to talk, on her phone, to someone.

“You would just not believe what shabby, incompetent people they hire here. They are just the worst. A bunch of dolts. No class at all. So base. So common. Well, I guess there is only so much that minimum wage gets you.”

I felt horrible for the poor saleswoman. I know she could hear this snotty woman.

When I left the dressing room, I saw the woman standing with her back to me and the saleswoman.

Winking at the tearful saleswoman, I tapped the rude woman on the shoulder.

“Excuse me. Do you work here?”

She appeared quite taken aback. Her mouth fell open.

I thrust the blouse, I was holding, at her.

She glared at me icily and stalked off.

I had just gotten engaged and it was the first time I had ever worn my pretty sparkly diamond. I was thrilled! I couldn’t stop staring at my hand. 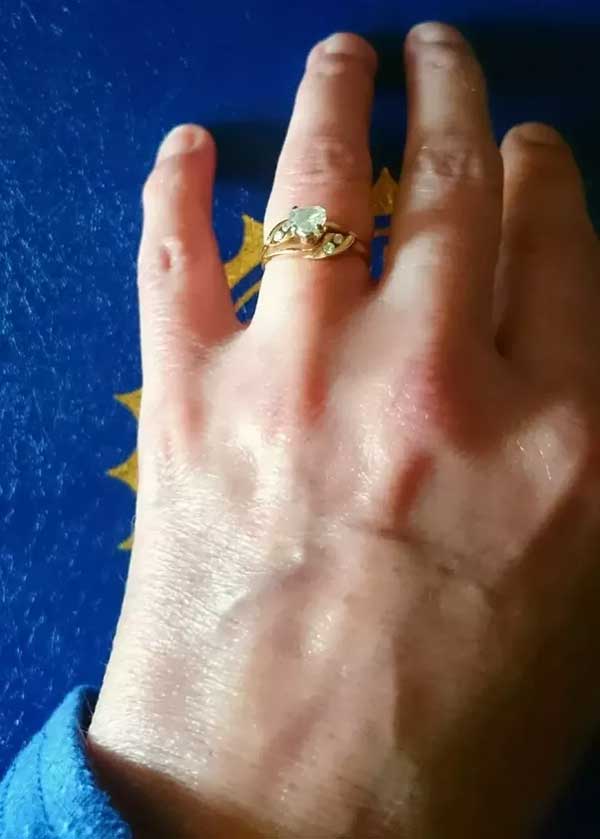 My husband and I had gone to the jewelers together to choose the ring. I chose a pretty heart-shaped diamond. It was fairly small at just under a carat, but it was crystal-clear, and of fine quality. My fellow was not a cheapskate. I preferred something comfortable with which I could play my piano and violin while wearing, and which wouldn’t dominate my tiny hand. He insisted it be of the finest quality, although that wasn’t very important to me.

I couldn’t have cared less.

However, in our culture, it is expected that a man should nearly go into debt in order to afford his future bride a sizable diamond when he asks for her hand in marriage. I never understood that pretentious tradition.

I prefer to wear jewelry I create myself, of hand-blown glass, and semi-precious stones I spend time chopping out of the earth on an outdoor adventure.

This diamond, however, wasn’t so ostentatious that it overwhelmed my dainty hand.

I would have rather had an opal, which is my birthstone, but the jeweler informed me that opals were fragile for everyday wear, and so we left the shop that day with a pretty little diamond perched upon my ring finger.

It looked so pretty, shining in its yellow gold setting. I couldn’t help but stare in wonder as the sunlight struck its facets and a prism of rainbows mobiled around the car as we drove away.

It is the first (and only) precious stone I will ever own, the single diamond in my collection. I’ve never, and will never, aquire another, for I never desire to wear any other. They simply aren’t to my taste. This particular diamond is precious- a symbol of my marriage. This diamond, worn with pride for over twenty years. It means something to me that no other over-the-counter bauble will. It is a symbol of my devotion, my pledge and loyalty to the one I love.

The rest of my jewelry is of custom artisans; quail feathers, hand blown beads and carved pendants. Wire-wrapped trinkets and dangling earrings with sapphires and rough fossils from the earth, carved bare (by me) on adventures precious, with filigree clasps created by creative minds, customized, cameo lockets with tiny, precious portraits inside, one-of-a-kind pieces, oftentimes inexpensive, and unique unto me.

The jewelry I wear is something you’ll never see on anyone else, because I make most of it, myself. It isn’t very fancy. The jewelry I choose to accompany me on my daily jaunts, are a testament to my own journeys through life. A timeline. I collect beads on my travels and string them together at the end of every trip. I’m a simple girl with earthy tastes.

However, that day, walking proudly and tall, fresh from the jewelers and joining in the festivities of our best friend’s house party (it was a holiday), I felt almost triumphant; I had finally become officially engaged. My engagement was finally cemented and I’d been officially “betrothed” after having previously spent a year “living in sin” with my guy.

Daddy could no longer consider me a “fallen woman”!

While circulating, and speaking to different people at the party, I tried not to gesture too much with my newly bedazzled hand. I couldn’t help myself, though. The ring was so pretty! I was doing a very poor job of keeping my hands still; I was gesturing and gesticulating, looking like a fool, and the vulture ladies, none too impressed with the tiny rock on my finger, flocked around me and mocked me.

My fiancé, mentioning my freshly bedecked appendage, so that I could save myself the embarrassment as to why I was talking with my hands so much, grabbed my hand and stilled it for the ladies to take a closer look. As they craned their bird necks in towards my hand, exaggerating the need for such close proximity in order to see it, I was simply happy to have someone finally notice, even though they were clearly poking fun at me.

I explained the fact that wearing a diamond was a new experience for me, and my heart was soaring with a newfound happiness I’d never known before. It was also my first and only engagement, which seemed like a more interesting topic to them, as most of those birds were already on their second and third marriages.

“Oh, you just got engaged, and THAT’S your ring?” they chirped. This lighthearted ribbing seemed to encourage one awful woman in the group, who ran with the joke. She made one cruel comment after another.

“Will somebody please bring me a magnifying glass so that I can see this thing?” she said, “Hmm. It’s pretty. Where’s the rest of it?”

The woman squawked at her own joke, the other women parroted her laughter, then she held her hand up next to my own, and compared her much larger diamond to my smaller one.

She told me how “cute” mine was as she wrinkled her beak in disgust.

She wasn’t finished tormenting me, and continued her humiliation, “It’s so SMALL, you poor thing. You know, I made sure MY husband knew I wouldn’t marry him unless he gave me at least two carats. What is this one? Less than a carat? Maybe a half carat? It’s so tiny! Here’s what you need to do, honey..Ask him to take it to get it cleaned. That’s what I did. After complaining for a year. Guess what!? He made sure to come back with a ring twice the size than what he left with! Don’t marry your guy until he comes back with something much bigger”.

I couldn’t figure out why someone wouldn’t marry the love of their life if he couldn’t produce a huge diamond for her. I must have looked confused, for she laughed, patted me on the head as if I were a child, and sucked her teeth in pity for me as she rose to leave me with that thought.

She said this to me in such a condescending, pretentious manner, and with such glee, that I could almost visualize the cruelty in her words, dripping forth in a green, frothy ooze from her vile mouth.

My heart collapsed inside, as the flock of ladies, stood and waddled over to peck at the buffet, leaving me sitting on the step staring at my pretty, tiny ring.

I let it sparkle in the sunshine, catching the rainbows, and smiled, knowing that most of those pretentious peacocks would be divorced within the better part of five years, and secure within my heart that I would still be wearing the same, tiny, precious gem for the rest of my life.

How Many People Have Never Drunk Alcohol?
The Brutal Admission Price for a Zoo
Breathe Carolina – Hello Fascination
20 Tweets About Having Kids That Are Funny Because They’re True