1.
That Christmas was the first I’d ever spent away from my family.
His family was doing Secret Santa so we only had to buy one present each. But I didn’t think that applied to me and Tim. So I got him a weekend in Berlin as a present. He got me nothing.
Two weeks later, when we went on the holiday, he spent the entire weekend in the hotel watching the whale trapped in the Thames, refusing to go out.
The following weekend he went to Manchester for ‘work’ and returned to let me know he was leaving me for another woman. While I was still sobbing, he asked me to advise him on what outfits he should take to impress her.
Sadia

2.
I was all dolled up and excited to meet my boyfriend at a club he was DJing at on New Year’s Eve. I left my mates at our club to go and meet him.
I got there about 1am, and ran around like an eejit trying to find him. I eventually found him but, when he saw me, his face fell.
I asked: ‘What’s wrong?’
‘I’m just not attracted to you any more,’ came the reply.
I mean, what do you say to that?
I slunk off, found a friend who gave me a massive hug and told me he was a tool, then I got absolutely obliterated.
He did me a favour ultimately, because, shortly after that, I fell in love with a guy I would be with for the next seven years.
Vanessa

3.
I was living with an American girl in London but her visa was expiring so she had to go back to the States.
We decided I’d give up my job, fly out to be with her at Christmas, then we’d find an apartment and sort out the residence permit and work visa while I was there (how naive was that?).
I handed in my notice and flew out a couple of days before Christmas. When I saw her at the airport, waiting with her parents, I knew something was up (her parents, whom I’d never spoken to before, seemed happier to see me than Erica did).
Over the next few days, things got weirder.
For instance, I ended up spending most of Christmas Day racing toy motor cars with her 10-year-old cousin, Julian, as Erica seemed to take a great interest in helping her parents in the kitchen.
I asked her what was going on and she told me that, as soon as she saw me at the airport, she realised she didn’t feel the same way. So we broke up.
But I didn’t have anywhere to go as I couldn’t afford a hotel. Her parents, who were absolutely lovely, insisted I stay with them until I found a job.
I stayed for the next month, probably in the lame hope that Erica would change her mind. She didn’t.
But it wasn’t all bad – Justin and I became firm friends. And I fell in love with Manhattan.
And now, years later, I’m happily married to the woman I was meant to be with.
Sean

4.
My then-boyfriend Ryan was an army officer and persuaded me to move into his house and look after it while he was away.
There were loads of debts associated with the property and I got stung for stuff, such as the £300 water rates, which I paid so they wouldn’t get cut off – and on the proviso Ryan paid me back.
For Christmas, I was invited to his parents’ pad – and spent a fortune on presents. Yet I didn’t even get a card from Ryan. Meanwhile, I had to sit through the (extended) family’s present opening.
In bed that night, he turned to me and said, ‘Sorry, I can’t do this any more.’
He then asked if I would stay to look after his house for three months, show people around until it sold, and if I could leave my furniture so it looked lived in. You can imagine what my reply was.
Mica 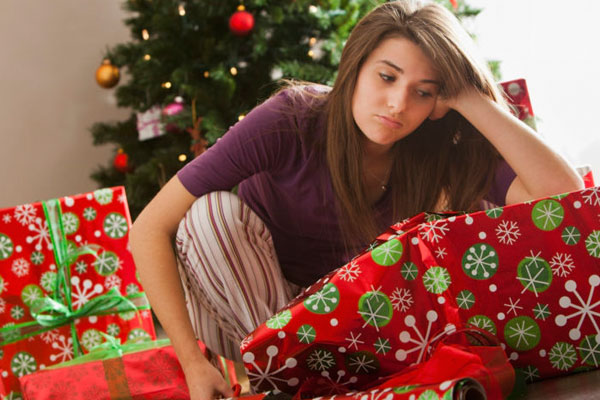 5.
My first love broke up with me in a brutal way. We had been going out for a while and I thought he was the one.
I invited him to spend Christmas with me but he made some lousy excuse and handed me a present instead.
It was quite a big box, beautifully wrapped, so it did salve my bruised feelings. I felt like he was still serious about us.
Anyway, I put the present under the tree.
On Christmas Day, sat with my parents and younger brother, I debated opening the present in private, but decided not to. How I lived to regret that decision.
As I unwrapped it a card fell out, which simply said: ‘You might be needing this in future.’
In confusion, I looked around the room and saw the horrified looks on my parents’ faces – and heard my brother asking, ‘But what is it?’
His final present to me was a Rampant Rabbit vibrator.
Rebecca

6.
I decided to move from South Africa to Scotland, where my family hails from, for some adventure. At work, I fell for a man who was engaged to a (female) colleague of ours.
Our friendship blossomed but I didn’t think anything would come of it as he was straight.
However, he fell for me and broke it off with his fiancee, which caused massive problems work-wise.
Also, his parents were horrified. He came from a Muslim family and they threatened to disown him.
In the end, we decided to move to South Africa. Before we left, we got married, with just a few friends as witnesses.
The first year was fine. Then, that Christmas, he started talking about starting a family – something I wasn’t interested in.
On New Year’s Eve, he said he realised he loved me but wasn’t in love with me. He moved out but decided to stay in South Africa.
We are still friends and he has since been reunited with his family.
Stu

Max Factor Makeup
What Are Your Tricks To Start A Conversation With A Stranger?
The Art of Changing a City
5 sleep disorders you didn’t know existed