While most people imagine depression equals “really sad,” unless you’ve experienced depression yourself, you might not know it goes so much deeper than that.

Asking community members on The Mighty Facebook page the question: “What’s something people don’t realise you’re doing because you live with depression?” The response was eye-opening. Below is a list of some of the things that people had to say.

1.
Struggle to get out of bed, sometimes for hours. Then just the thought of taking a shower is exhausting. If I manage to do that, I am ready for a nap. People don’t understand, but anxiety amd depression is exhausting, much like an actual physical fight with a professional boxer.

2.
Going to bed at 9 pm and sleeping throughout the night until 10 or 11 am. Then getting out of bed is the hard part. Showering is also a struggle. Trying to keep the house tidy. Watching hours upon hours of Netflix but not even interested in what I’m watching because nothing really interests me anymore.

3.
I can deal with depression, I can’t deal with people who say “we all get sad at times, get over it” “I’m depressed too, I get on with my life” depression isn’t the same for everyone. I’m glad some people can cope easier but I can’t.

4.
I don’t like talking on the phone. I prefer to text. Less pressure there.
Also being anti-social. Not because I don’t like being around people, but because I’m pretty sure everyone can’t stand me.

5.
Agreeing to social plans but canceling last minute. Using an excuse but really you just chickened out. It makes you think that your friends don’t actually want to see you, they just feel bad. Obligation.

6.
Sometimes I’ll forget to eat all day. I can feel my stomach growling but don’t have the willpower to get up and make something to eat

7.
Hiding in my phone. Yes, I am addicted to it, but not like other people. I don’t socialize, I play games or browse online stores to distract myself from my negative thoughts. It’s my safe bubble.

8.
In social situations, some people don’t realize I withdraw or don’t speak much because of depression. Instead, they think I’m being rude or purposefully antisocial.

9.
Say that I’m tired or don’t feel good all of the time. They don’t realize how much depression can affect you physically as well as emotionally. I have a hard time finding energy when I’m in a depressive cycle. That means I don’t stay on top of stuff & let things slide (like house work) because I use all of my energy for what absolutely has to be done. Then I have none left for anything else. When I’m depressed, we eat out more, my house chores fall behind, & I binge watch TV or read to escape. But the energy, that’s just gone.

10.
Purposely working on the holidays so I can avoid spending time with family. it’s overwhelming to be around them and to talk about the future and life so I avoid it.

11.
I used to live with depression. People didn’t seem to notice it because I was always smiling while talking to them and making jokes which made my personality look bright and joyful, while I was actually dark inside, full of sadness and lost hope.

12.
People think I’m lazy and a freerider because I haven’t had a job since leaving uni. They don’t realise that I want to work more than anything, but have an endless stream of negativity constantly running through my head that terrifies me out of even printing out an application form. 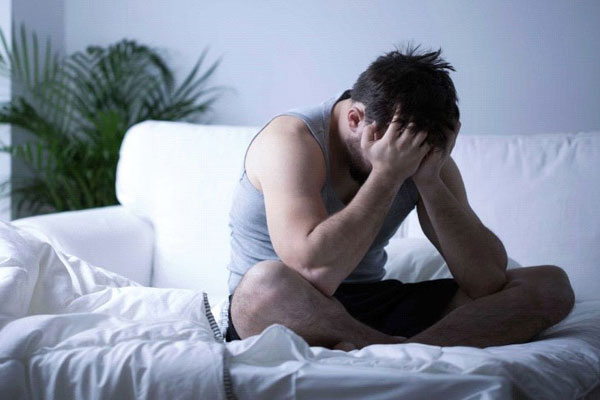 13.
Isolating myself, not living up to my potential at work due to lack of interest in anything, making self-deprecating jokes. I’ve said many times before, “I laugh, so that I don’t cry.”
Unfortunately, it’s all too true

14.
Depression to me was like having an evil person as my puppet master telling me that I will feel no joy, have no desire, have no energy, no appetite, no light. Like something steals your soul. Until you have experienced it, you will not understand it. I wouldn’t wish this feeling on my worst enemy.

15.
Being angry, mean or rude to people I love without realizing it in the moment. I realize my actions and words later and feel awful that I had taken out my anger on people who don’t deserve it

16.
For me, specifically the things I wish people would realise are due to my depression are my apparent “laziness”, virtually not keeping in touch with anyone, bad personal hygiene, and extremely bad reactions to seemingly trivial things.

17.
Neglecting to do basic things like laundry, not wanting to cook a meal or eat. They think I’m being lazy.

18.
Fighting day to day with not wanting to give up and trying to show myself my own self worth.
When I reach out when I’m depressed its cause I am wanting to have someone to tell me I’m not alone. Not cause I want attention.

19.
I just sit all day, getting up only to use the bathroom. My chair is also my bed. I have a bed, but i just stay in my chair. I don’t sleep well, and I eat very little. The TV is on, but I may or may not be watching. I just sit.

21.
I over compensate in my work environment…and I work front line at a Fitness Centre, so I feel the need to portray an ‘extra happy, bubbly personality’. As soon as I walk out the doors at the end of the day, I literally feel myself ‘fall’. It’s exhausting! Then my night is a constant battle in my head fighting my desire to ‘shrink’ and anxieties. Most people that I interact with would NEVER know I live a daily battle of major depressive disorder, PTSD and anxiety. I am a professional at hiding it.

22.
The struggle to get out of bed and get off the couch is hell. The physical pain that exists. The house always a mess because no one else will or can do anything and I get blamed which all just makes the depression worse. The thinking about what I need to do makes me anxiety paralyzing.
Not having a job and physically not being able to even look for one after all the rejection.
People think I’m lazy.
I know a clean house helps me feel better, helps me socialize, causes peace and calmness, I want to and I try, but I just can’t. I know a job will give me purpose and reduce stress by adding some financial stability to my family. I really want one and perhaps that is why it is so heartbreaking every time those phone calls don’t come.

23.
I don’t talk much in large groups of people, especially when I first meet them. I withdraw because of my anxiety and depression. People think i am ‘stuck up’. I’m actually scared out of my mind worrying that they don’t like me, or that they think I’m crazy or stupid, by just looking at me…

24.
Cancel plans because of anxiety. Stay home and hardly ever go out. Struggling to get out of bed everyday. It’s exhausting. Getting ready for work is a struggle. There is so much. Been dealing with this for 35 years

25.
People don’t realize that I say sorry before I even think about expressing any opinions because that’s how worthless I feel. I’m apologizing for feeling anything about anything because that’s how little I feel I matter. They don’t just know I feel like apologizing for even breathing in their general direction. I even say I’m sorry before asking to use the bathroom no matter how long I’ve held it. I feel like a burden for biological needs I have no control over.

26.
That I’m fighting through a wall of separation when I talk to them. That sometimes I blank or delay in answering because I’m still trying to process what they’re saying.
That when I reach out to them it’s after an agonizing period of trying not to. I don’t want to burden people with my shit, but sometimes I just need to hear someone’s voice.
That my everyday is marked with extreme fatigue and exhaustion. That everything for me takes much much longer.
That I am completely envious of people who are full of life and genki af. That I wish my life was nothing but optimism and bliss, that I felt a zest for life and was overflowing with energy. That that is who I really am behind all the junk they have to see and put up with. That I wish I could just ignore it all and have fun.

27.
The excessive drinking.
Most people assume I’m trying to be the “life of the party” or just like drinking in general. I often get praised for it.
But my issues are much deeper than that.

28.
Sometimes I’ll go days without speaking to anybody. People tend to believe I’m ignoring them on purpose when really I am just lost within myself. I don’t mean to seem like I’m pushing people away. Some days it’s hard when my thoughts consume me and when I can’t find the motivation to simple things that others do on a daily basis.

29.
I wake up feeling like I’m a failure. I have to coach myself every morning into telling myself that I’m good at my job, my kids love me, my husband needs me…and if I don’t go to work everything gets shut off… it’s like I can’t move…

30.
Answering slowly. It makes my brain run slower and I can’t think of the answers to the questions as quickly. Especially when someone is asking what I want to do – I don’t really want anything. I isolate myself so I don’t have to be forced into a situation where I have to respond because it’s exhausting.