The Mysterious Secret Never Revealed to Anyone

I lost my grandfather back in 2012 and since than my grandmother lives all alone. Though we all live together but she lives on the first floor and we on the second floor.

My parents donot treat my grandmother well. They feel as if she iritates them. Because of this my grandma never asks for any help from them. But she pampers me a lot. Whenever I have to return to my hostel after vacations she starts crying and hugging me. So the secret part is that everytime i come home for vacations, i secretly keep some money into my grandma’s piggy box that she has so that she doesn’t face any trouble for her daily needs. I am from a middle class family and an engineering student not earning yet. Whatever pocket money my parents give me i try my level best to save some part of it to give to my grandma during vacations without her knowing it. She probably thinks that her memory and her eye sight has gone weaker with age so never notices it. Though like every guy even i love to party and chill out with friends but whenever i remember those teary eyes and the hug from my grandma i am able to refrain myself and save some money.

I wish my grandma lives for 100 more years.

One day I was going down an escalator and had just sought shelter from the heavy torrential rain.

I mean, it was bucketing down wheelbarrows!!

Suddenly I had this very skinny malnourished looking woman approach me as I was going down the escalator and ask me for spare change.

Many times I had helped people begging in this location of the city and bought food etc, however this stands out and is something I am sharing to encourage or inspire someone else having a tough time.

I said to the young girl, “sorry, no I don’t.” And I noticed that she looked so down and disappointed, unlike the other beggars I had encountered.

I then noticed that she was in bare feet and wearing very tattered trackpants which were fraying at the bottoms.

This indicated to me that she possibly hadn’t eaten for some time, and had probably fallen through the cracks, since she hadn’t even a decent pair of shoes or suitable clothing.

so I said to her “I don’t have any coins but I’m going shopping at the supermarket, and to the department store afterwards. You can come with me if you like” 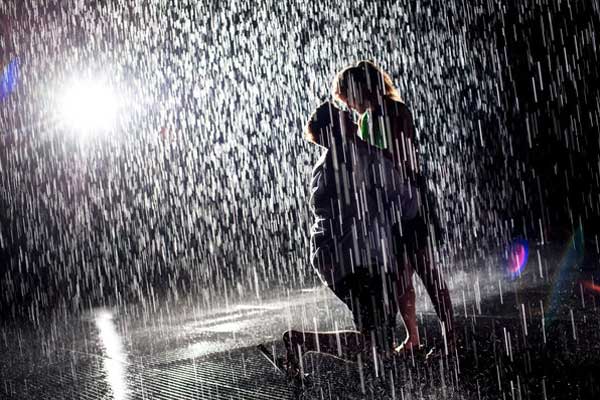 The young girl looked at me puzzled and agreed to accompany me to the supermarket.

I said “I’m just ducking in for some groceries and by the way, anything you need, just add it to my bill”

The girl looked at me in dismay.

She came back with some basic things for herself, to which I said “don’t be shy!”

So she came back with drinks and food for herself that she could enjoy. She looked like all her Christmases had come at once!

We paid the bill and left.

After leaving the supermarket I walked to the direction of the department store and she started to proceed to leave. I said to her “aren’t you coming in with me in to the store?”

By this stage she looked very surprised.

I walked to the shoe department with her and was to her stating that I needed to buy a pair of jogging shoes and that she was the perfect person who could help me pick a pair out.

So she did, except I said to her that she was helping me buy a pair of jogging shoes for herself so she doesn’t walk around in the rain with nothing warm on her feet, because being winter it is very wet and cold.

the girl burst into insurmountable tears and also hugged me like I had never had anyone hug me.

When I hugged her she wouldn’t let go of me.

so I hugged her very tightly back as this very tiny girl sobbed in my arms for what seemed like a very long time.

The security guards were approaching and so in the end I told her to pick out anything to her hearts desire that she needed.

The young girl wanted to purchase the most expensive pair of shoes in the store saying she will have these shoes for all her needs of sleeping rough on the streets and how everyone would be jealous. I told her to be careful but could see she was very happy buying the most colourful and vibrant pair of shoes possible.

She continued sobbing and said “nobody has ever done anything like this for me before” and cried some more telling me her story of how she landed on the streets and how she was badly abused, and left with no choice but to sleep on the streets.

So I gave her my business card and contact details to get in touch with me if she ever needed any further assistance in future.

The young girl cried her eyes out more in the store as I hugged her and told her she was a beautiful girl and is capable of so much more than the story she just told me.

I made her promise that if I bought the shoes for her, that one day she would make sure she does her best in life to get off the streets and do well. This is so that one day she can surprise someone else and also be able to afford to pay the favour forward, and to only to help someone else just as I had helped her.

well, the young lass I never heard from again after that incident.

however, one day as I was getting off the tram a very elegantly dressed woman rushed up to me and called out to me, remembering my name.

I didn’t recall her straight away as I had helped many people over the years and somehow time does things to your memory on occasion.

It turned out this was the lovely young girl I had helped and she was now helping others just like she had been homeless once, as she explained.

I was blown away and elated at the same time for her. She also proceeded to tell me she has 3 lovely children.

So we are standing in the street and hugging and crying.

She explained how she never forgot what I said and did for her on the day.

She said that she had done her best to tell her children the story about me as a bedtime story, so that they too will know the value of kindness and one day hopes her children can put this into practice to help others as I had told her to do.

I burst into tears by this point as I never thought I would see her again, and had often wondered about the small shoeless small girl I had helped that day. Given all the other beggars I had often seen on a regular basis around town.

I remember thinking that here is this elegant woman who was happy, housed, and doing much better than I last remembered her as. And most of all helping others and had survived.

Life is surely full of surprises, and for me it meant everything. This something I hadn’t told anyone beyond since when it occurred because I’ve never felt it good to go boasting on our good deeds for others when kindness should simply be an automatic way of your daily life.

I think that helped me more than it helped her in the end due to the lovely lesson it taught me of what it is when we give without expectations.

30 Hilarious Picture Tweets That Every Woman Will Relate To
32 Tweets About Mums Guaranteed To Make British People Laugh Every Time
What Should I Do To Express That It Was An Accident And That I’m Sorry When I Stepped On My Dog’s Foot?
18 Photos That Show Why It’s So Hard To Understand Japan