What Would You Do If Someone Pepper Sprayed Your Dog?

My neighbor shot my father’s dog one day to “try out” his new shotgun.

The dog was on our property, doing nothing.

My father has one leg, 7 herniated disks, and a collapsed spinal cord supported by titanium rods.

He heard the shot, saw Sugarbear running and stood up from his wheelchair.

He didn’t respond verbally. On his prosthetic leg he moved without his walker or even a cane, faster than I’ve ever seen ANYONE move, much less him.

I got out the backdoor just about the time he was getting to the guy holding the shotgun. Words were exchanged, I couldn’t hear them. Suddenly my father grabbed this guy by the chest with one hand and lifted him up off the ground, still holding the shotgun. He pulled him in close and said something. Then he threw him like 20 feet! He landed on his ass and the gun fell to the ground.

My father had his injuries since before I was born, I was always in awe of how smart and persistent a man he was. He was the poster-child for being level-headed, I had never even seen him yell before this day. After that day I understood what a beast of a man he could be if he wanted. I was, (and 20 years later am still) in awe of this man’s strength.

The dog lived and is fine today.

The neighbor? Pissed his pants and calls us all “Sir” now. I won’t look at or speak to him or any member of that family.

Edit: I should have put some back story. My bad.

1. My father was a semi-pro body builder before he injured his back. He is an enormous man, he can easily pick up a car battery with one hand.

2. I was 12 when this happened, so it probably wasn’t 20 feet, plus I was behind my father so hard to judge distance from there.

3. Yeah, I probably exaggerated about how far he threw him, so what? He’s my dad! That was the coolest f***ing thing I’d ever seen!

Someone did pepper spray my dog, actually.

So friendly, in fact, that he decided to shove his way through the door as we opened it and run across the yard at full speed toward the mailman. To shower him with love and kisses, of course!

The mailman didn’t know anything about that. All he knew was that someone’s crazed medium-to-large-sized dog was tearing through the yard, headed directly for him.

So he whipped out his pepper spray.

Poor Schroeder was whimpering and pawing at his eyes, but we knew he would be fine. My parents went out to apologize to the mailman and let him know we weren’t mad. Then, we brought our dog back inside and washed his eyes out.

He kept snorting and squinting and acting like a little drama queen for the rest of the day, but as predicted, he was fine. 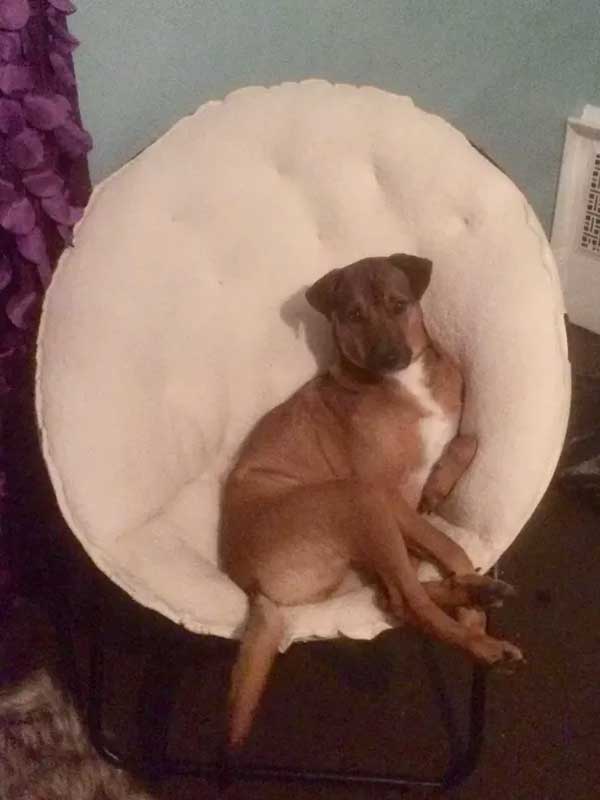 There he is trying to take over my chair. What a sneak. :)

16 Jokes Every Student Whose Written Anything Will Laugh At
How many children better for the family?
People Are Sharing Hacks That Are So Ridiculous, They Have The Internet In Stitches
20+ Crazy Food Secrets That Will Make You Say “Whoa”