12 Moms Reveal The Most Disgusting Part Of Their Pregnancy

1.
I threw up all day every day … The worst was in the mornings when it was only stomach acid. But puking in a plastic bag while I drove to work or having to grab the trash can while I was on the toilet was almost just as bad.
Lynzie

2.
All the extra panty pudding. So much cervical mucus. So. Much.
Jaime

3.
I had cholestasis, so my liver wasn’t functioning properly. All of the bile my liver was supposed to be breaking down was coming out through my skin, mostly the palms of my hands. I scratched so hard, my skin was constantly peeling off and it looked like I was wearing skin gloves. My arms were covered in welts from scratching and the bottoms of my feet were so gross because that’s one of the main places the bile was exiting my body.
Marybeth

5.
I went to labor and delivery, thinking my water had broken because there was so much fluid. No. And it wasn’t pee. It was sweat. Yay for being pregnant in Florida in the summer!
Jennifer 2

7.
With my first I got a bad yeast infection on the outside of my vag, from the top all the way to my butt. My labia were so inflamed and itched so bad that they looked like two bratwurst on each side. I couldn’t walk because they hurt so bad!
“Sienna”

8.
Gestational diabetes induced halitosis. It was so bad so, so, so bad
Caitlin

9.
I was so constipated from my prenatal [vitamins]. We were staying with my then-fiancé’s aunt and uncle and I was trying to poop. I was in so much pain. Yup. He did it. He stuck his finger up there to get my poop out.
Alexandra

10.
Having kidney stones and my husband having to sift through my pee to make sure they were coming out!
Kasey 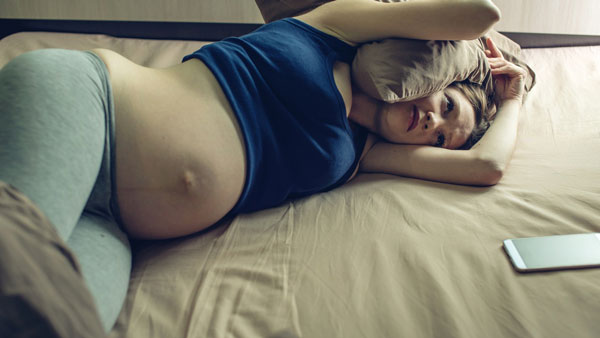 11.
Horrible smelling gas. I didn’t even want to be around myself.
Jasmine

12.
I started producing milk early (started leaking at 26 weeks) and got a clogged duct and mastitis at 36 weeks. It ended up becoming a golf ball sized abscess that had to be surgically drained and tested positive for MRSA. Because it was my t*t, I couldn’t really look away and saw them cut and drain it. Then I had to stick a q-tip dipped in peroxide in the hole daily to clean it then repack it with gauze. It was so awful and so painful. I had to have an IV in my arm of antibiotics and have a home nurse come change the catheter every few days then she’d tape clear wrap stuff over it real good but I had to wear a rubber glove over it to shower. Then there was the worry that the incision wouldn’t heal in time and I’d have my daughter and my milk would come in and the engorgement would cause it to reopen. It was a blessing in disguise that she was over a week late and I was induced and able to nurse. The incision had just fully healed. I have a cute scar to top it off. But I HAD NO IDEA THIS COULD HAPPEN!
“Faire”

Amazing Boy Imitates Lil Wayne
Are Self Made Millionaires Happier?
What Are Some of The Most Interesting Little-Known Things?
Education and Exercise Can Keep the Brain Young