1.
I showed up to a restaurant for my first day and there was a notice on the door that they had been shut down… i have so many unanswered questions
FarmPhreshScottdog

2.
The job required specific licenses and technical knowledge which I said I didn’t have during the interview. They hired me anyway. Three days in and the director of the company finds out that I didn’t have any and I was fired
imiweli

3.
Coworker of mine had to fire a new employee on his team on day 4.
The new hire brought her girlfriend to work (who was not employed with us) and she sat in the lunch room on her laptop, working on…god knows what. This occurred for 2 days before anyone realized she didn’t work here. We told the new hire to tell her to leave. She said, “If she goes, then I go.” They both left
Bussashot

4.
I got fired from a landscaping job after two days. Supervisor told me my work was fine but that I didn’t chat enough. Maybe I would have been more willing to chat with him if he hadn’t been hanging out on the porch naked when I showed up at his house on the second day to drive to the work site.
Paraffin_puppy 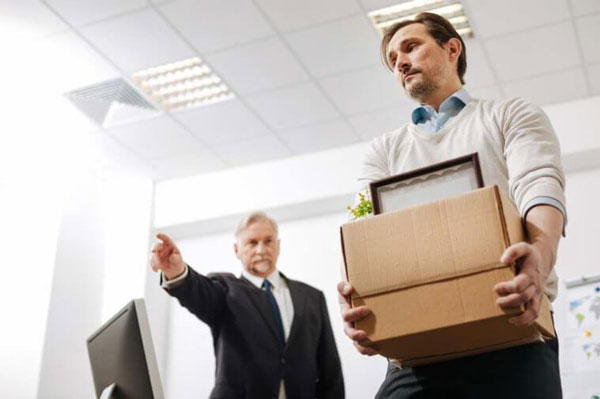 5.
The guy was looking for bar staff who could hit the ground running, I told him I don’t much experience behind an actual bar, just a limited one at race events. (like 15 drinks compared to 50), he said as long as you are good I don’t mind.
He gave me 3 shifts, I text on the sunday to find out what shifts I had the following week and he says “Oh I asked somebody to tell you not to come back, tell you what i’ll give you another chance, you can do 2 more shifts”.
Im like “Alright, fu*k you but whatever”, I turn in monday I am on my own, the normal staff didn’t turn in, I got everything ready between me and the cook.
After my 2 shifts he told me not to come back because I wasn’t experienced enough, took me a month to track the bastard down to pay me. (He stopped answering my calls so I used a different phone and got him, so he was actively avoiding me).
paulusmagintie

6.
I’ve only been fired once.
This was my first job, I was 15 (it was Subway). I was training so I wasn’t on the official schedule yet but the store manager told me to come in from 9-5 M-F to train. I left on Friday at 5 and he said to check back that weekend to see if I was on the schedule for the following week. I came in on Saturday and went to check the schedule, I saw that I had a few weekday shifts the next week, wrote them down and left. I came in the following week and went to walk behind the counter when a coworker stopped me. It was during the lunch rush and she stopped serving customers and shouted “YOU’RE FIRED. YOU DIDN’T SHOW UP FOR YOUR WEEKEND SHIFT!” I was stunned. I told her I came in on Saturday, I WALKED PAST HER to check the schedule and I wasn’t on it! If I was supposed to be working, why didn’t she say something to me when I was there? She then told me to take off my uniform (in front of all of these customers who are now staring at me) and give it back. I had to undress in a restaurant full of people and then leave. Thankfully I was wearing a tanktop under my work shirt.
I was so humiliated. Easily one of my worst memories.
_anacantha

How Long Does Apple Keep Data from Siri?
Why Did Leonardo Da Vinci Buy Caged Animals?
Why Were Dragon Bones Used in Chinese Medicine?
What is Christopher Columbus’ Real Name?