1.
My friend Jen was sitting by a campfire when–out of nowhere–a bat came swooping down and bit her on the mouth! ON HER MOUTH! It latched onto her lip and they had to rip the bat off. It was totally rabid and she had to get 6 weeks’ worth of rabies shots. Terrifying!
chrisl45818d9d4

2.
My dad took my brother and I camping in our backyard when I was six. He got really intense about it and wouldn’t let us go inside to use the bathroom, so–in the middle of the night–I peed in the tent and then went into the house and slept in my own bed.
Julia Rose Katlin, Facebook

3.
We were camping as a family and my brother was about 3 at the time. At about 2am he woke us up when he exclaimed, “Look mommy! Look at the big butterfly!”
Yeah. Not a big butterfly. A bat had gotten into the tent and was flying around in a panic because it couldn’t get out. I think I’m still partially deaf from my mom’s screams.
allivymar

4.
My two best friends and I were camping by a lake and decided to go skinny dipping late at night. As we waded into the water, one of us remarked, “It’s so dark! I can’t see anything!”
Then, from across the water, a man’s voice said, “I can’t see anything from over here either” (in a creepy and disappointed way).
emileem41b124c24

5.
I walked by my step-dad while he was chopping up logs for a campfire and a piece of wood flew through the air and hit me in the head. I got knocked out and when I woke up my parents were frantically packing up the whole campsite.
2sweet4u

6.
A couple years ago, my friends and I went to a camp that had a pretty prevalent raccoon problem. One night a woman in our campsite took a shower with some strawberry-scented shampoo instead of the scentless stuff we were instructed to use. She woke up in the middle of the night to a raccoon combing through, LICKING, and CHEWING on her hair.
Abby Guenther, Facebook

7.
I was sitting on the steps of an RV and watching one of my older cousins try out a fishing rod in the parking lot. He swung it in an area where there was no one around, but as soon as he did, my younger cousin came running out of another RV in his direction.
As the hook descends, my younger cousin looked up and it caught him in the forehead. I screamed! There was blood running down his face and all the parents ran out shrieking.
15 years later, he still has the scar and we never went camping as a family again.
draem27

8.
I was sleeping with my cousins outside of a cabin that our parents were staying in, when I woke up because of a terrifying noise. It’s hard to describe, but it was like a horse in pain. I woke everyone else up and they told me I was dreaming, so I forgot about it. Four years later I found out that a donkey was killed by a cougar that night on the next property over.
bethanya4042bb4a3

9.
The summer after my freshman year of college my parents made my entire family go camping in Montana with my sister’s future in-laws to “get to know them.” While we were up there, we went backpacking in Glacier National Park. I was on my period, which made hiking 10+ miles a day while carrying a 30 lb. pack *really* fun.
The “best” part: I had to give my used tampons to my sister’s fiancee (who I had only just met) because we were in a national park and had to take all of our trash with us. He had a special bag for them and we had to have a whole conversation about it before the trip. Awkward!
Megan Platt, Facebook

10.
I was in the ladies’ shower stall, minding my own business, when a huge, territorial WOLF SPIDER decided to join me. For those of you who are not familiar with wolf spiders, those things can get to be the size of your hand and this one had its own zip code.
I screamed and tactfully left the ladies room with my towel wrapped around me and my toiletries in hand. When my husband came out and asked what was wrong, I told him about the spider and he said he would “go check it out” and take care of it for me.
A few seconds later, I hear him shout, “Holy shit!” and he comes back out with a look of shock on his face, saying, “Never mind… he made his claim of the bathroom. He can have it!”
Lacey M. Parmer, Facebook

11.
We went camping about 12 hours away from home and my step-dad dropped the only keys we had to the truck into the lake. We were stranded.
annamarieg3

12.
There was a horrible storm on the second day of a camping trip I took with my family. The lightning was flashing before our eyes and the thunder was crashing like hell. I was 10 years old and terrified; hiding in my tent screaming my lungs out. All of a sudden we heard sirens–it was an ambulance. A person at the camp site right beside us got hit by lightning and was unconscious!
To this day, thunder storms still scare the absolute shit out of me.
Gaby Ramirez, Facebook

13.
I used to work at a Girl Scout Camp and all of the counselors discovered that it was easier to “jungle pee” than it was to hike 1/2 a mile to use the bathrooms. One night when I was “jungle peeing,” I turned my head to discover a moose standing less than 10 feet away from me. In case you don’t know, moose are actually pretty dangerous, so I took off running, losing my pajama pants and underwear as I run.
So there I am, sprinting through the woods in the middle of the night, half-naked, and I hop behind a large rock to hide from the moose…only to land on a porcupine.
I’m not sure what was worse: having to walk down to the lodge with porcupine quills in my butt, or having to endure the mocking that ensued for the rest of the summer.
ellka2222

14.
There was a man in his fifties staying alone in the campsite next to my boyfriend and I, and–much to my protesting–my boyfriend invited him over for dinner and some drinks. The man proceeded to get very drunk and tell us he was there to meet a swingers group. He then tried to talk my boyfriend into letting him sleep with me.
I slept in the backseat of the truck that night. With a machete at hand.
Sadie Vincent, Facebook

15.
My friend and I shared a tent at Boy Scout Camp and he tends to sleepwalk. One night, he stood up in the middle of the night and just peed all over me. I yelled at him to stop, but he just finished peeing and went back to sleep.
To this day he denies that it happened.
joshuab45ce27d1d

16.
We finally made it to our campsite, settled down to go to bed, and were forced to listen to the people in the next site over having sex…for hours. Nothing like the “sounds of nature”.
Holly Lane, Facebook 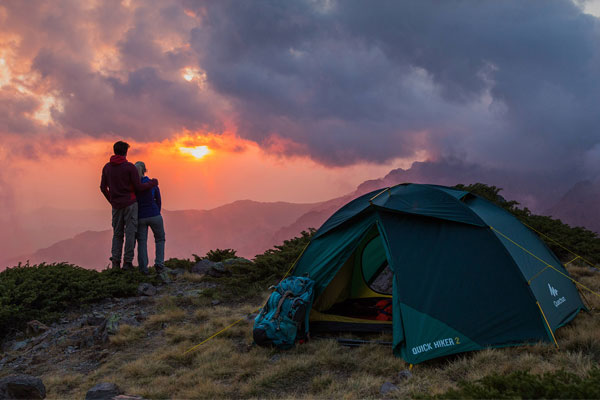 17.
During a camping trip I got about 20 leeches stuck all over my legs. One of the bites turned out to be a spot where a leech decided to lay an egg: I didn’t realize that for a few weeks until the bump popped open and the egg literally rolled out of my flesh. SO GROSS.
akels

18.
I was camping with my family and family friends and one night (at about 1am) we heard strange moaning and chanting sounds. We looked outside our tents and saw a group of women walking in circles around their fire while reading from a strange book. We didn’t sleep much that night and left as soon as it was daylight.
sierranicolep2

19.
My elementary school had a graduation trip where they took all the 6th graders on a camping trip near Santa Barbara. On the last day, one of the activities was going on a long hike to a nearby lake to go swimming…but we had to go through a forest to get there. I haaaaaaate bugs (I always have), so walking through a bunch of wilderness wasn’t my thing, but still–nothing prepared me for what was about to happen.
The last struggle before getting to the lake was to cross this huge, dry creek. It was OK…until I slipped from a rock and stepped on some dried up algae. I kid you not, thousands of black spiders of all sizes began to crawl out of that hole–and I was wearing sandals! I ran away crying and it still gives me the chills.
zoestevens80

20.
A raccoon came into our tent in the middle of the night and stole my toothpaste. Nice to know I’m not the only one concerned about dental hygiene.
heidir489f2c5b4

21.
I was on my way to go pee in the middle of the night when I stepped in a huge, steaming pile of moose poop.
Kim Bushell, Facebook

22.
During a camping trip my dog Lady trotted off into the woods while we were having a good time by the river. After several minutes of quiet, we went to go find her: she was playfully rolling in a decomposing moose carcass. On top of that, she had found my father’s fresh stool sample and rolled on that first. She smelled like death, but I’ve never seen a dog so proud of herself. Even though she bathed in the river, no one would touch her for the duration of the trip.
michelled40

23.
I had decided to become a vegan a few months prior to going on a camping trip with my friend and her family. All was going well, but it was so hot and the ice cream my friend was eating looked so delicious and refreshing. I caved in and had about three ice cream cones that day and then decided that (since I was back on the dairy train) I might as well have some macaroni and cheese for dinner.
I was sleeping in the top bunk that night, and woke up and projectile vomited across the bed. I couldn’t get down, so I just puked 7 to 8 times into my pillow case. We stripped down the bed and put everything outside…in the morning there were wild horses chewing on the puke pile.
beanielebean

24.
My boyfriend and I were on a rock climbing trip in the Shawangunk Mountain region of the Catskills. On the final day of our trip, he decided that “nature was calling” and hiked out of sight to do his business. I stayed back at the crag and admired the calm and stillness of the warm September day. That stillness was quickly shattered by a shriek of “OH GOD!” and a loud clamoring noise. I looked up and saw my boyfriend running through the forest, being chased by a swarm of bees.
It turns out that he had somehow managed to poop directly on top of a bee hive. Luckily, he managed to escape with only a few stings on his legs and bottom. The lesson of the story, kids, is to always look before you do a #2.
bananasanta

25.
OK, so there I was…sleeping on the ground. Outside. On purpose.
That’s it. That’s the horror.
karryhuur

18 People Who Have 100% Definitely Found Their Soulmate In Life
18 Sushi Abominations That’ll Make You Say, “Holy Sh*t”
Marcy Playground – Sex and Candy
16 Amazing People Who Took Things To Another Level