The Most Uncomfortable/Embarrassing Experience In A Public Bathroom

1.
I was standing at a urinal in a large restaurant bathroom in downtown Seattle, a man in the first stall reached under the barrier and untied my shoe, then laughed and said: “got cha (some name that is not me)….” I kicked at his hand and said: “yeah, that’s not me” had to walk out and tie my shoe…
Vikingcoconuthybrid

2.
This past week I was in a restroom at a movie theater. A woman in a stall across from mine answered her phone, she asks, “What’s wrong?!” Then she puts it on speaker(???) and I hear a girl on the line sobbing, saying “I DON’T EVEN KNOW.” I then attempted to tune it all out, because, awkward. I leave my stall, wash my hands, and then use the hand dryer (no paper towels). I didn’t do it to bug her on purpose, I just wanted dry hands, but the woman grunts angrily and storms out of the stall, giving me a dirty look as she leaves the restroom. ???!!!
Pro-tip: Phone booths may be extinct, but please don’t treat restroom stalls like them.
sluttttt

3.
It’s always uncomfortable when people look through the slit in the doors bbbypeach_

– This is an American problem. We are like a 3rd world country in that way .. you go into the bathroom and there is
1. No way to tell if the door is locked. God forbid there be a red/green indicator that shows when the door is closed and locked vs closed and not locked.
2. HUGE GAPS in the sides and underneath the stall, so that people are forced to either get down on their knees to look under (like a creep) or peek between the gap (like a creep). Alternatively you can yank on the door. . like a creep.
I’ve never been to another developed country where this is the case.
LongIslandIcedBoner

4.
Removed a tampon, it slipped out of my grasp in slow motion, landed on the floor of my middle school bathroom and proceeded to gently roll into the stall next to mine.
embee43 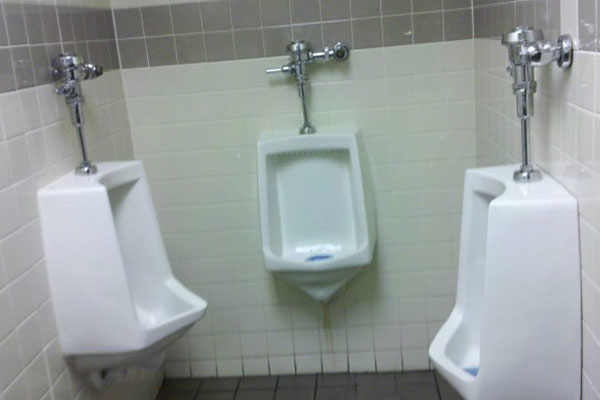 5.
Same thing happened to me, i was in a bathroom with two stalls, the non handicapped one was taken and I was poking a turtle neck, so I jumped in the handicapped one.
I hear a bang on the door and then a second later I hear heaving and shuffling and banging, I noticed a wheel chair bumping against the stall.
I sat in silence for about 5 minutes until they left so I wouldn’t feel bad.
But seriously, I’ve NEVER seen a handicapped person in a public bathroom, nor have I used their stall, and the one time I do…
SHMUCKLES_

6.
When I was being followed by a guy, and he followed me into (the women’s) public bathroom… that was not good. At least it wasn’t empty.
accidentw8ing2happen

Salvador Dalí Modern Art and Surrealism
The Smartest Thing That Done In Exams
Has Anyone Got a Perfect Gaokao Score?
Rich People in China and Body Doubles