When Have You Experienced True Joy?

“Dad, I need your help, come here!” My 11-year-old girl dragged me towards the computer.

“Dad, please purchase everything I have in the Amazon shopping cart. Here, take this cash from my savings!”

The shopping cart showed ten items for a total of about 130 dollars.

“Wait!” I replied, “That’s too much money! Why do you need all these things?”

“Please, Dad! These items will get here before Christmas. I have a surprise for everyone… no peeking!” she insisted, and I never hesitated.

A couple of days later, she got everything.

I saw her then wrapping all her gifts.

“No, Dad, I told you these are special surprises, absolutely no peeking!”

Her excitement was visible; she was proud. She was alive. She was glowing with happiness.

The day came. She couldn’t hold herself in. She was all around her gifts, planning, protecting, arranging. Everything had to be perfect.

As soon as dinner was over, she jumped from her chair and took her gifts. She went around giving each one of us her piece of love. These were small value items, but it was the meaning of her giving heart that we were really feeling.

As she gave to each person, she paused. She watched the expression of our face. Our smiles were her greatest reward.

Her last gift was for my back then 2-year-old boy. A rocking pony ride-on toy.

It’s hard to describe the explosion of delight that my little boy had on his face when he got this gift!

For several minutes, everyone’s attention was absorbed watching him go all around the house making it a rodeo arena. Even though the pony is designed to be a static rocking horse — his excitement was so significant that the horse slid a few inches forward or backward with every thrust he exerted into the little toy. 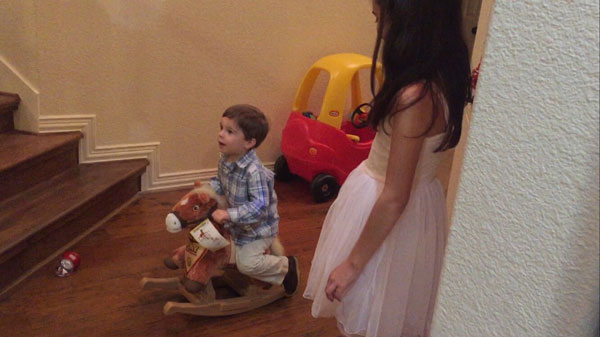 My little girl watched rewarded with a huge smile on her face.

Later that day, my girl received some gifts, but she didn’t need them. She was focused on others, not on her. It was evident that she was the one feeling true JOY. She was full.

My older brother was diagnosed with a degenerative spinal disease.

Within six months, he could barely walk.

He was always the more athletic one.

He’d do ten sit-ups, then have a six pack.

Then his back started hurting.

A year later, it hadn’t gotten any better.

In fact, the pain worsened.

He went to the doctor.

“You need to have immediate surgery.”

My brother was crushed.

We prayed the surgery would fix everything.

He goes to the doctor again.

Turns out the surgery wasn’t perfect.

So he goes under the knife for a second time.

This time, he’s so drained of energy that he can’t fathom moving from his bed.

And he’s so depressed he can’t tell if he’s gotten better.

At this point, I feel helpless.

I have no idea how to help him.

My parents get in contact with one of the best back surgeons in the United States.

They have him perform – hopefully – the third and final surgery.

It’s been a lot for him to go through in a year.

He has major atrophy and doesn’t walk more than a few steps.

All the while he’s fighting back a mountain of anxiety and depression.

A month later, I take the train back to my hometown to visit him.

I ask him how he’s feeling.

He says for the first time, “I’m getting better.”

I reply, “Are you really getting better?”

In that moment, I felt true joy.

Enough to make me cry.

How Much Has College Tuition Increased Since 1985?
Alex Ovechkin Scores Two Goals In 12 Seconds
20 Christmas Movies That Are So Bad, They’re Good
Shooting Beretta Underwater