People Are Sharing The Best Thing They Saw Today

My close friend and batchmate from school won Miss World.

It feels as if I’ve won.

This can’t sink in. I was out somewhere when I saw the news and I stopped just to shout and scream, that’s how happy I was. Happy is an understatement.

It’s a feat that felt unimaginable but nonetheless I have written many answers previously where I had written I have full faith in her that she would become Miss World.

This is something I had posted in 2016 when she hadn’t even participated in any pageant. I just felt genuinely she should try because I had never seen such a beautiful person inside and out.

People are asking me to become a fortune teller. :P

This thing has paid more than its price and became priceless - 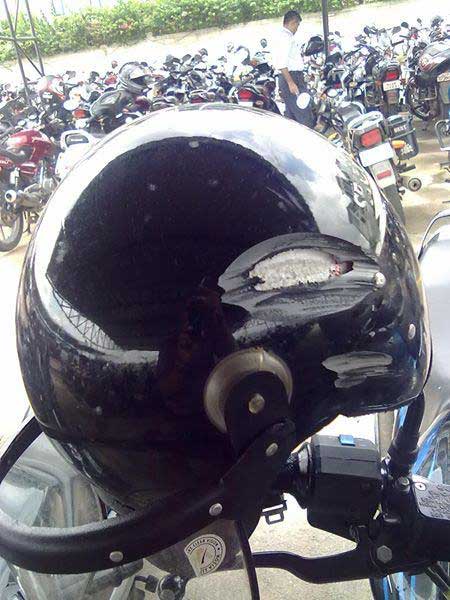 Saw this helmet on a bike in my office parking.

I enquired about the owner of the helmet. Found that he met with a horrible accident few days back when a street cow just came in front of his bike. He could not control the bike because of sudden braking. He slipped and skidded more than 10–12 feet with his bike. With some minor injuries and scratches he survived the accident.

Just look at the damage on the helmet. It is peeled off 2–3 cms. You can see the thermocol packing inside is clearly visible.

Now, imagine if this person was not wearing helmet. He would not have survived and died of serious head injury.

Looking at this picture, bike riders should understand the importance of wearing the right helmet.

Guys, it will save your life.

1. Don’t use the helmet if it has encountered an accident. Replace the helmet with a new one.

2. Always use a helmet with proper jaw protection.

3. The helmet should have clear visor to protect from dirt and debris. It also helps in clear vision.

I saw a family standing at a corner of the road waiting for a bus. It looked like a normal middle class family. The father was well dressed in a crisp shirt pant, the wife in a cotton Saree with a purse in her hand and two beautiful kids. Girl must be 6. And the boy must 3.

The father took out a small phone. The one with the keypads and said he is on his way and told the person on the other side to not worry.

Meanwhile, the kids were getting bored. The girl took a piece of a wooden stick lying around. Made it in a V shape. Took that stick a little further away from her face and smiled.

Yes. She pretended it to be a camera phone and she was clicking a selfie. I burst out laughing. She then made her brother a partner too. He too smiled and clicked a few ‘pictures’.

Then she taught him to pout. And the lovely guy followed suit. Matching his sister in the lip movement he looked so cute.

They played around with it till the bus arrived and his father signalled them this is the bus they need to board.

Kids do not need HiFi things to make them happy. It’s us, the parents, who want the kid to have everything. That girl knew her father doesn’t have a phone like that. I don’t know if she ever asked him to buy one. But the way she had embraced the fact that they don’t have it but she can still pretend, was brilliant.

Kids have simple needs. They are far more adjusting than us.

I have purchased expensive toys for my daughter but she still loves playing with kitchen spoons and dabbas (utensils).

I spent a good 15 minutes looking at those kids and it was the best thing today.

18 Travel Hacks You NEED To Know Before Your Next Trip
People From Ohio Curse More Than Anyone Else
What Is The Craziest Thing You Ever Did When You Were A Teenager?
News Coverage of Donald Trump’s First 100 Days