People Share Worst Meals Ever Eaten At Someone Else’s House

1.
When I was around 9 or 10, my friend’s mom offered me a half a stick of butter as a snack. Apparently my friend’s favorite afternoon snack was a full stick of butter. I declined as respectfully as you might expect a 9 or 10 year old would.
logwagon

2.
Brother’s wife put 5 boneless chicken breasts in a pan, poured canned peaches and canned pears over them, and baked at 350 for an hour. Nothing else. It was a secret family recipe she grew up with and loved. It was terrible and I felt poisoned.
thallbetheday

3.
Friend’s dad when I was young had the distinct skill of barbecuing meat which is burnt black on the outside and raw on the inside.
Viscerid

4.
Brother’s wife put 5 boneless chicken breasts in a pan, poured canned peaches and canned pears over them, and baked at 350 for an hour. Nothing else. It was a secret family recipe she grew up with and loved. It was terrible and I felt poisoned.
ElephantTickle

5.
Sat down to eat and someone asked for something from the fridge. I was nearest so I got up to get it. The fridge smelled like a landfill on a humid day in August. I could not eat after that.
Mentalfloss1 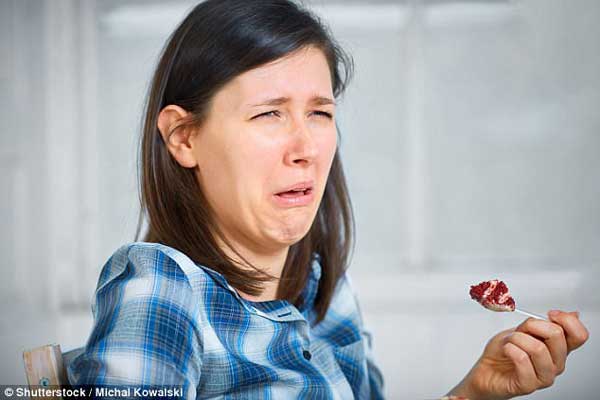 6.
My grandma once served me burnt-to-a-crisp hamburgers and hotdogs with dishsoap-washed salad (yes, you could taste it). For desert, there was cinnamon jello made Hot Tamales (it was revolting). At least she did burn the meat though, because it had been “thawing” in the summer heat outside for the entire day. Grandma’s meals were always a little terrifying. If she didn’t cook the meat long enough, there was plenty of food poisoning to be had.
EatsAtomsRegularly

7.
It wasn’t so much a bad meal, but the method of serving was… different. A friend invited me and a couple of other friends to dinner when I was in high school. His mom served homemade chicken soup, which was fine. There was chocolate cake for dessert, but instead of serving it on separate plates, she went around to each of our places and sliced off a piece into each of our soup bowls, each of which still had some broth. Chocolate cake flavored with chicken broth is not a flavor I really want to repeat.
President_Calhoun

8.
My grandmother was such a terrible cook that once when she was cooking corned beef, I walked into her kitchen and promptly threw up due to the smell.
My dad once said that he thought she was a good cook until he went into the army. He wasn’t trying to be funny, it was just an honest observation.
cursethedarkness

What Events Happened on September 9 in History?
Which Marine Animal Looks Like a Flower and Eat Small Fish?
What is it like to be raised by two people of the same-sex?
If You’re Under 21, Here Is A List Of British Music You Need To Listen To