10 Epic Flirting Fails That Will Make You Cringe

1.
Does sending her a five paragraph long email, describing how madly in love you are with her, count?
I dont know if it necessarily counts as flirting, because it wasn’t subtle, but it definitely failed lol.
DoritoKat

2.
My college crush and I were riding the elevator and she was sucking on her lollipop. She looked at me straight in the eyes and asked me if I wanted it, pointing the lollipop at my lips. I said, “Nah, I’m good.” Elevator opened on my floor and I went to class.
I fu*king hated what I did for the rest of the semester.
HTPark

3.
Feeling I needed a neutral opener to the conversation, I approached him and awkwardly started talking about someone else we both knew. He just thought I was being nosy and gossipy, and told me I should shut the fu*k up and mind my own business. Ouch.
InbhirNis

4.
I meant to say “hi” or something but his arms were so beautiful. I ended up saying “biceps”.
FamiliarNameMissing_

5.
Was at a festival, and went over to talk to a girl I was interested in. For some reason I tried to get her attention with a water bottle, that was unknowingly open. I fu*king soaked her with it. There is no coming back from that.
AzusmattyboyTM

7.
I was ~18 and trying to flirt with a guy who I was sure had a French accent. I wanted to ask where he was from, and said, “Je suis de France?” which, unbeknownst to me at the time, means “I am from France?” He was completely unamused and goes, “I’m from Hungary.” Ten years later and I’ve never tried to speak French again. Or Hungarian.
somegirlyaknow

8.
So back when I started learning how to flirt a few prior successes made me decide to try my luck with this intimidatingly hot girl. So I walk up her brimming with confidence tap her on her shoulder, she turns around and I said “Hey” with a raised eyebrow. She’s looking unimpressed so I follow up “Why would a girl like you feel the need to hide that pretty brown hair” (her hair was black at the time), she’s smiling now I’ve got this. She gets really close to me all giggly and bright eyed asking how I knew her hair was brown. Her hotness shatters my false confidence and I start mumbling her having freckles, genetic impossibilities and deductive reasoning… it was all down hill from there.
Not-an-Ocelot 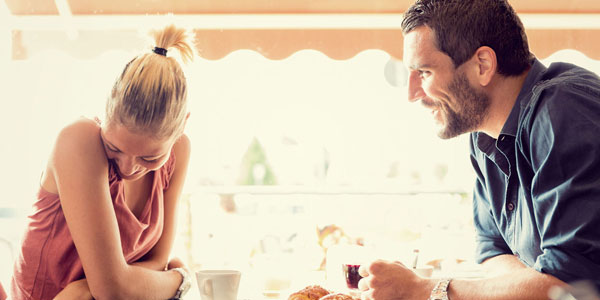 9.
I was talking to a girl and her friend in a nightclub and it was going well so I figured id whip out the ol iPhone 3G (long time ago I know) to ask for her number.
I was far too enthusiastic and it went flying out my hand and landed on the floor and reset so it displayed the apple logo.
I just picked it up and said sighed “never mind” and walked away with my shame.
Little did I know the girl who is now the mother of my child watched it happen and was laughing from afar.
blazingwhale

10.
When I was seven I had a crush on this girl in my class. I was the only boy in the class who actually liked girls by this age and I tried to hide it. At the same time though I really wanted her to be my girlfriend, whatever seven year old me thought that entailed.
So I tried a bunch of different things, I invited her to my birthday party, where my brother made fun of me the whole night, I always picked her when we played 7up, stuff like that. My favorite was when it was Valentine’s Day and I wanted to impress her, so I tried to smell really good, I didn’t own cologne because I was seven, so I covered myself in baby powder. No joke like head to toe underneath my clothes was covered in baby powder.
On top of that I made this huge Valentine’s Day card that had this picture of me and her holding hands I drew myself. When it came to hand out the Valentine’s, we did, but I was so nervous when I did it, and everyone started mocking me saying I had a crush on this girl. It all became a little too much for me and I vomited, on to my crush.
If that weren’t enough, upon realizing my mistake I blurted out, I’m so sorry, I love you! As I was trying to clean the vomit off of her with my bare hands. Safe to say she didn’t feel the same way.
_will_sex_for_food