Embarrassing Moments In A Relationships

I peed all over my boyfriend while we were in his bed.

Ex-Boyfriend and I loved random pillow fights. However, usually the “romantic” pillow fights turned into real power fights, ending with both of us fighting like cats and dogs..(it was our slightly extreme version of foreplay). 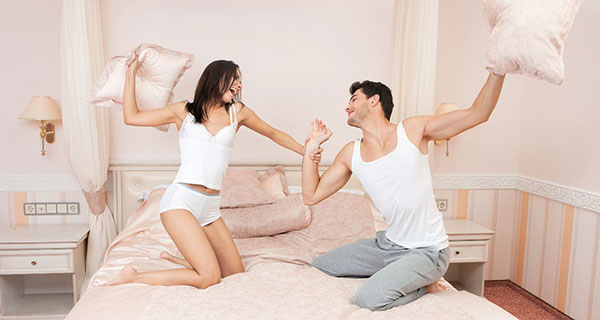 Something like this – a lot less romantic than them though. We got very competitive.

One of these days, the fight gets quite intense – neither one of us is ready to give up. After many attempts, Boyfriend finally gets into the power position – on top of me while I lie on my back. Extremely happy with his feat, he is siting on top of me, locking both my hands while I am struggling to get out of his hold. This goes on for a while.

Well.. after a fair bit of insisting to let me free, he dosent listen to me so I tell him that I really need to pee (which was actually true), but Boyfriend won’t get off because he thinks I am making an excuse to get back into power.

Well no points for guessing what happens next — (he got very wet but not exactly the way he would have liked!) — but seriously how long can a bladder hold!

Next few hours were spent taking a long shower, washing the clothes, the bedsheets, the blankets.

Now, whenever I say I need to pee, he takes it very very seriously – he has major trust issues with my bladder now.

I gave us both food poisoning.

When I was about 18, I had the bright idea that I would cook a really nice dinner for my boyfriend. He loved seafood, however, I didn’t really know how to cook seafood.

I decided it couldn’t be that hard, and I cooked up a bunch of clams. Half of the clams didn’t open after I cooked them, so I popped the shells open with a knife.

My boyfriend loved the meal, and wolfed down most of the clams.

He said he “didn’t feel well”, and was in the bathroom puking the next hour. I wasn’t far behind but since I didn’t eat as many, I just felt nauseous and had to lay down. We both felt sick the rest of the night.

Later, I discovered that if a clam doesn’t open after it’s cooked, it means the clam has died and may be rotten.

I felt extremely guilty and embarrassed. I didn’t do much cooking in the relationship after that.

If I wrote this under my name I would be stabbed to death in my sleep.

When my (now) wife and I were dating, we were sitting one night making out on the couch. Just kissing – having a fun time. I’m not sure why, but at one point it struck me to blow into her mouth. Her cheeks puffed out and air came blowing out her nose; it was hilarious. She thought so too, and said, “I want to try that!”

A few minutes later I unexpectedly felt my cheeks puff up and a burst of air travel through my head and out my nose — carrying with it the the hugest wad of snot imaginable. I had no idea it was even in there – it must have been tucked up in a sinus, or maybe it was brain tissue. It shot out all over her cheek and started to ooze down the side of her face. I was mortified, and tried to scoop it off of her, finding it was a two-handed job.

She was not super happy about how things had gone down, but we agreed it was hilarious after the fact. If you can move past something like that, then you’re meant for each other!

The reason for going anonymous is that I don’t know how would my husband react to this thing going public.

But then, this thing gives relationship goals. So here I go.

I had a fairly good pregnancy. But during the delivery, because my baby’s head was quite large I had to get an episiotomy done. For those who have no idea about this, it’s a cut made between vagina and anus to make the vaginal opening bigger so that the baby’s head can pass.

So well if you are grossed out, don’t read further.

Anyway, because of that I had a lot of stiches and the pain was intense especially after a 20 hour labour.

The doctor advised I should take rest and shouldn’t exert myself. And the first pee and the stool would be painful.

When I had the urge to pass stool, I went and sat in the bathroom. The pain was unbearable, a little less than labour though. I cried and screamed.

The door was unlocked( I had passed out when I had went to pee after the delivery. So husband ordered me to not lock the door) and my husband knocked on it.

“Is it too painful?” He asked through the door.

Clutching my stomach I managed to say a yes.

A few seconds later, the door opened and husband gave his hands for me to hold.

I looked up to find him sitting on a chair with his hands stretched out to me.

“We are in this together. At every stage.” He said.

“It’s not. I can’t even imagine if I would be able to endure the amount of pain you have gone through. The least I can do is support you. Give me your hand. You can do it.” He wiped the perspiration off my face and gave me strength.

Tears streaming down my cheeks I held his hand and passed the strenuous test.

It was embarrassing then, but now when I think of it, it was full of love.

If you go past something like this in a relationship, you have a one amazing companion for life. And nothing else matters.

While thinking deeply, is it more productive to stand or sit?
I need pictures of you vehicle
Do Dogs Get Embarrassed?
15 Bathrooms That Are Seriously Not OK