My son asked myself and my husband why we were showering together? Save water!!!

1.
Made a joke to my 2.5 year old son about locking the car door so bears don’t get in. He’s 3 now and every time he’s in the car he locks the door and says “bears”.
QuackingQuackeroo

2.
This was actually something my mom did.
When I was little, I hated going to bed. I would get up and wander around my house instead of trying to fall asleep. One night my mom told me (out of sheer desperation) that there was a monster who lived under my bed, and if I got out of bed, he would eat me. That night I really had to use the bathroom, but I was scared of the monseter eating me. So instead of risking a monster attack, I wet the bed.
craziebee89

3.
When my son found out the tooth fairy wasn’t real, he cried. He told me I was a liar. I felt so guilty.
Snarls_Bukowski

4.
My daughter didn’t talk to us for a week after she found out santa wasn’t real. She’s also mute so she hasn’t talked to us in 23 years.
duke_nukem_king

5.
Did the shitty thing of introducing cell phones to my 3 year old son. Now, he’s addicted to it. So, to get him away from it I always tell him it’s dead or broken.
Now, I can’t get on reddit as often.
__Nathan__Hale__

6.
letting my kid grow up thinking his mother was a decent lady. once the kid found out what she did when we split up, the mom got disowned.
thereallyrealworld

7.
Not me but I saw on here one time that somebody told their kids that when the ice cream truck is playing music that it means they’re out of ice cream. I could see that backfiring if their kids saw other kids buying ice cream from it.
jdance1125 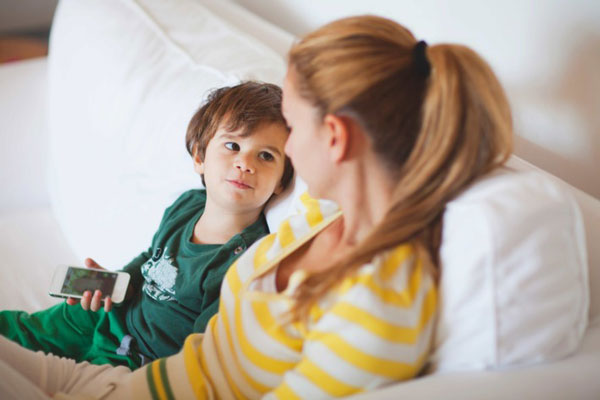 9.
My son asked myself and my husband why we were showering together and I quickly told him to save water. When they were talking about recycling at school the teacher asked what their family did to help the planet. He told his teacher his parents shower together to conserve water.
britt316

10.
Told our girl to check if the door was closed before going to bed (when we left her alone at home) because of robbers. She ended up so scared that we couldn’t leave her alone at home anymore.
AcrIsss

11.
I was the kid in this sistuation. Parents tried to make it seem like going to a restaurant is much more expensive than it actually was. My mom tried to convince me that tips was 100% of the bill rather than 10% to show how expensive it was (“oh Josh, you have to pay the same amount in tips, so you really pay double” and all that bs)… so when my parents let me pay the restaurant bill for the 1st time on their credit card when i was 9 years old, i put the tip as 100% of the bill. I think my parents remembered their lie midway as they rushed towards the front desk to ask me how much i tipped them. It was too late.
d0fabur5st

12.
I like to play music in the kitchen when I cook. My kids, of course, don’t share my taste in music, and my son would just walk up and turn it off.
Once, years ago, when my kids were 4 and 2, I had a friend over and we were in the kitchen with music playing. My son came in and turned it off, and my friend told him that there were trolls in the basement, and the music put them to sleep, and I’d he turned it off they would wake up.
Since they were already scared of dark places, including the basement, the kids took this as gospel. For the next 3 or 4 years, I had to have music playing in the kitchen at all times,24/7, or the kids would freak out and start crying about the trolls. At one point I tried to take them to the basement to show them there were no trolls…let’s just say that went tragically.
Elle_J001