Have You Ever Witnessed A Tragedy At A Wedding?

The culmination of “Murphy’s Law” in excess.

When I was 20, my two good friends, E and S, were getting married. I had known him, E, since high school, and her, S, since the start of college.

They were both those clumsy types of people — you know the type who seems to always trip on that small thing, or slip on that patch of ice.

While at their wedding, it seemed that their clumsiness transferred to everyone and everything else—meaning that nearly everything that could go wrong, did, in fact, go wrong.

Here’s a summary list, instead of the whole story:

1. Power cut out while everything was being set up—this was not the only power outage that would happen.

2. The priest who was to wed them was late—got in a fender-bender accident on the way.

3. The rings were supposed to be delivered by the best man. He forgot them. So he had to drive the one hour round trip to get them.

4. The photographer dropped his camera and shattered it. He said not to worry, he had a backup—he dropped it, too. Their pictures were taken by standard cameras from relatives.

5. When the priest finally arrived, he slipped on someone’s spilled coffee, breaking his wrist. He still conducted the ceremony.

6. The air conditioning quit working after the second power outage, right as the music to walk down the aisle was starting. It would get so hot that everyone was sweating profusely by the end.

7. When the groom, E, was waiting at the altar, the power went out again. A few laughs, a few groans, and quite a bit of murmurs of annoyance were all that could be heard.

8. As the ceremony began, the priest had the wrong names—called them two women’s names. Awkwardness at best.

9. The best man passed out, mostly due to the stress of having to race back to his house to get the rings and the heat inside once the AC cut out.

10. One of the relatives in the back got into a fight with another and had to be escorted out of the building.

11. Power went out once more as vows were being said.

12. After they’re officially married and exiting, the bride slipped on some thrown “bird-friendly” rice. The groom got one in his eye.

13. The printed instructions to the reception took everyone to the wrong entrance, which, as it is set up, means that everyone was beyond confused on how to circle the whole compound just to get to the other side. It took 20 minutes for people to make some signs and stand on the corner to redirect people where to go.

14. They had an open bar. A drunken uncle loudly wished, over the microphone, them the best “F*cks of their lives.”

15. A jaded ex of the groom’s (also an old acquaintance of mine) tried to crash the reception and make a scene – thankfully she was handled by the reception hall’s security.

16. Finally, they both fell during the bride/groom dance.

They’re both still happily married, 10 years later, and just as clumsy as ever.

Not mine, but my parents’ anecdote.

So, a couple years after they got married (around 1993 perhaps) they were invited to one of my mother’s high school classmate’s wedding. Now, my mother attended a very high-profile only-girls school in the ‘new’ part of the city, where daughters of ambassadors and girls from the most elitist circles of society studied. Most got married after they had barely finished high school, but not this one. Lets call her Veronica, while her groom will remain Luis.

So, the wedding was flamboyant. Doves were released after they exchanged their vows, they brought a whole orchestra (30 people) to play during the reception, and some photographers from a couple magazines came to the event. Everything was going according to plan. Smooth sailing.

However, disaster arose when the bride and groom began to slice their beautiful wedding cake. According to my mama, it looked like this: 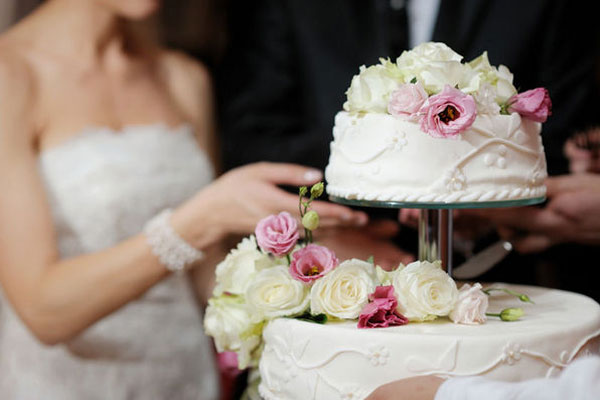 The cake was like 2 meters high. This gorgeous monstrosity had been thoroughly photographed during the event, but now it was the center of attention.

A friend of the groom was helping to pass the plates with cake around. Turns out it was also the groom’s birthday, and people started to sing the iconic song for him.

I don’t know if this is a thing outside my country, but after the birthday-boy or girl blows his/her candles, a friend or family member playfully pushes their head onto (and sometimes into) the cake, so they can have a taste of such delicacy. This is called ‘mordida’. Bite.

As you may suspect, this sometimes turns into full-blown conflicts and dramas since birthday-boys and girls sometimes end up with cake upon their eyelashes and inside their nostrils.

And, as you may have guessed by now, this is exactly what happened.

The groom’s friend waited till everyone had sung the happy song, and without previous warning, he smashed the groom’s head unto the cake. What he didn’t know is that to maintain the cake steady and to keep such a heavy structure upward, they had to put thin yet resistant wood panels in between each layer of the cake.

Thus, instead of meeting a somewhat soft and creamy surface, Luis smashed his nose against one wooden panel, and following the inertia, broke his nose.

Chaos ensued. The bride was screaming bloody murder, indeed it was bloody because the groom started bleeding all over the cake, people couldn’t figure out what was happening and ran up to them in a futile attempt to help; the groom had passed out by then and they couldn’t lift him: the friend who had committed the deed was trying to remove vanilla and strawberries from Luis’s face, and…

The wedding cake went down like a Jenga Tower, on top of the poor groom and Veronica (the bride) and the unfortunate friend.

Not only did they have to drag the groom out of the massive cake and call an ambulance, but the bride also had to exit the premises in the same vehicle since she had a nervous breakdown that led her to faint.

However, it all worked out. 24 years later, Veronica and Luis are still married, they have 2 kids, and his nose seems untouched.

The Grossest Thing Babies Do Inside The Womb
Teen Can Buy an AR-15 but Not Beer
What Is The Craziest Thing You Ever Did When You Were A Teenager?
Michelle Jenneke Dancing