20 Questions All People Are Tired Of Being Asked

1.
“What do you have to be anxious about?” Nothing you waffle, that’s why it’s a disorder.
RichardConger

2.
“Where do you see yourself in five years?”
I can barely predict five days in advance.
Greenplastictrees

3.
“Why are you so quiet?” or something along those lines.
breathe_in_and_out_

4.
“Classics major, huh? What you gonna do with that?”
“I dunno. Heroin?”
equalsnil

6.
“How are you still single? Are you looking for something serious?”
Quite frankly, if I could answer the first question then all of this would be solved now wouldn’t it, Lisa.
Edit: Family dinners are the WORST for this question.
TidalKnave

7.
‘m a male Ashley and I hate answering questions about my name. No, I wasn’t named after the Gone with the Wind guy. No, my parents didn’t want a girl. No, I’m not fu*king with you. Just give me my number so I can pick up my food when it’s ready. Jerk.
JedLeland

8.
I don’t like being asked what I’m doing on the computer. I’m not doing anything. Really. If I were doing something worth talking about I’d tell you, but half the time I’m not even interested in what I’m doing
badsantaxx

9.
“Why don’t you call X person? They haven’t heard from you in a while.”
Why won’t THEY call me? The phone works the same for both of us. Somehow the onus is always on me to reach out to other people.
hopsandhorns

10.
“Oh so it’s just your mom? Where’s dad?”
Dead. As in not living. Have a nice day.
nogoodimthanks 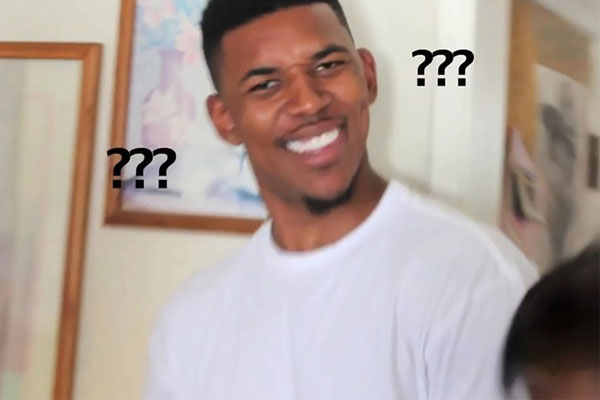 11.
Do you know him/her? He/she’s polish.
There’s 1.5 million polish people in Chicago. No I don’t know them. Except once in a while I do actually know them.
DancingPaul

12.
“Why is my kid failing your class?” PattyHowell
“Why don’t you let your son/daughter answer that question” usually works for me. AlwaysShamo

14.
Not so much a question. I speak English and German and any time it’s even mentioned I always hear some variation of “say something in German!”
BishopofHippo93

15.
“You work in television? What shows have you worked on that I would know?”
“You wouldn’t know any of them.”
“Just name some! I watch a lot of TV.”
“XYZ.”
“Yeah I don’t know any of those shows.”
notdazzer

16.
Are you sleeping?
DeCecco

17.
“When are you having kids?” or “Why don’t you have kids?”
It’s a super personal question and it is a pretty sensitive topic for my wife.
captainnoob

18.
“Want to hang out after work?”
I just want to respond, “I think you’re great, but I’d rather chew on a tin furby than expend any more energy today.”
squeeeeenis

19.
How did you ge those scars? It’s none of anyone’s business and I don’t like talking about it.
IoSonCalaf

20.
Monday morning at the office: “what’d you do this weekend?”
None of your damn business and it’s bait to ask the question in return, which will result in a 30 minute diatribe about what they did this weekend.
islandsimian