Why Do People Run Away From Home?

1.
My grandfather ran away from home at sixteen after his father drunkenly tried to hold his face to the kitchen stove and burn it off. He never went back and to this day we know virtually nothing about that side of the family.
Qiex

2.
I’m on the other side of the globe. I backpacked for a bit but already had a job lined up. It wasn’t the first time my parents stopped speaking to me, but I have no plans to return to my home country. Life’s much nicer without them.
surprise_b1tch

3.
I started by traveling to India in the 70′s, I am now in Amsterdam, married with a son. its been quite a ride.
multia-z

4.
My plan was to make it upstate and get to NY, eventually police caught up to me. About two years later I moved out through legal means, and I ain’t looking back!
usbfridge

5.
My cousin was kicked out/ ran away at 16. He lived in the woods for a couple of weeks doing the odd day jobs for food. My other uncle took him in as soon as the family realised he’d been kicked out. No one knew cause we all lived a good bit a way from him :/ he’s doing good now. Owns a business and has a son. But it had an effect on his mental state unfortunately
donadee

6.
I ran away from an abusive foster home at 16. Ended up moving in with a family from my church and getting adopted by them. I’m 28 now and hold a bachelor’s, I’m currently pursuing a Master’s. I still struggle with emotional trauma but everything gets better with time.
Catsnamedwaffles

7.
After years of normalising being mentally abused by my mother who suffers from borderline personality disorder, my girlfriend made me realise it was the complete opposite of normal, I couldn’t take it anymore and it was having a hugely negative impact on my own mental health so one day while she was out I moved all my stuff into my girlfriends house and haven’t spoken to my mum since. Things are a lot better and I finally realise what it means to have a family that actually cares for me.
Bands_and_stuff

8.
I left home in 1993. I hitchhiked and traveled. I followed the Grateful Dead for a while. Got married. Joined the army. Lived a decade or so in Germany. Raised 4 kids. Moved back to the US, but not home. Got diagnosed with multiple sclerosis and retired at 43. Now I watch a lot of TV.
jdenotsko 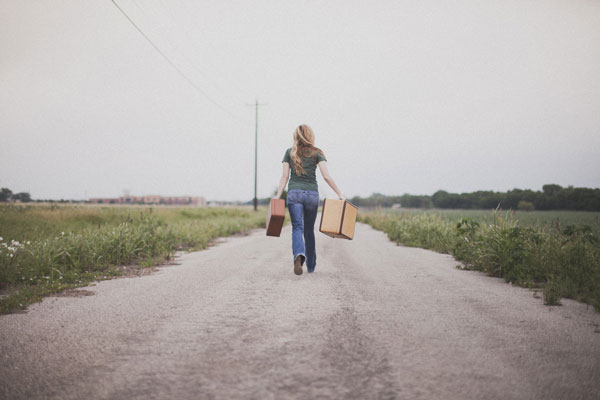 9.
I left when I was 17 and stayed with my boyfriend’s extremely generous mom (she knew about the abuse I was suffering at home) until I graduated high school. There was nothing my mother could do about it at the time because she was living in a homeless shelter, and because I had a willing guardian, the police couldn’t/wouldn’t force me to leave and go back to her.
After high school I bounced around a lot, was homeless for a short time, and finally I got a job that could pay the bills and rented a room. I didn’t get to finish college (too expensive), but I’ve been gainfully employed ever since. I live in the same city but my mother moved back to my grandma’s house in Florida as far as I know. We haven’t spoken in over 10 years now.
Note I’m married to a great man, living in a house we own, and I’m starting a new job on the 30th. Life is good.
IsabellaGalavant

10.
I left in the middle of the night at 19. So legally an adult, but emotionally I was really several years younger, in large part because of untreated mental health issues. I left for a few reasons. Pregnant and afraid to tell my parents, serious friction in general with my immediate family, and just kind of generally not at my most stable. I went to a friends house, and lived with them and their family to get it together.
I’m 33 years old now, have a 13 year old kid (14 in a few months), and am generally in a much better place. I got the psychiatric help I really badly needed, and got myself together. I get along much better with my parents now as well. I love them, but we really are just not the best people to live in the same household.
AngryRobotsInc

11.
I ran away just after I turned fifteen. I had been living with my dad, who’s a narcissistic alcoholic. My mom didn’t really want me to live with her. She lived a few states away.
Several extremely generous families took me in over the next three years until I finished high school. I had to change houses every now and then because my dad would threaten to sue whomever I was staying with. One man in particular was like a father to me and helped rehabilitate me (living alone with my dad my whole life had caused psychological issues and misconceptions about family, love, etc.).
I was able to maintain my grades and matriculated at a prestigious university. I ended up becoming a software engineer. I love my life now, and few people know about my backstory. I have no contact with my dad.
samsalias

12.
My parents used to push me out of the house as “punishment” when we would get into arguments. This was among a range of abusive punishments they used to keep me in line over the years. We started arguing a lot after I turned 18 because I was trying to make plans for my future and was literally told that I wasn’t allowed to. Not just that I wasn’t allowed to plan ahead, but that I wasn’t allowed to move on and live an adult life. I wasn’t allowed to get a job, move out, or go to college. These were actual things I was told I was forbidden to do when I was an 18-year-old high school senior. The first time they made me sit outside after I’d turned 18 was a freezing cold night in early February, 4 months after my 18th birthday.
In that moment it clicked for me that there was an entire world of better things for me out there than the position I was in. By the next time they made me sit outside, I had already snuck most of my stuff out of the house. I had a friend help me by stuffing her own backpack full of my stuff or secretly picking up stuff I’d leave hidden on the side of the house. It only took me 4 days to get ready for the next time they pushed me out in the middle of the night, which was about a week later. That night, I turned around and walked away, and I haven’t looked back since.
My parents tried showing up at school and making a scene, telling everyone who would listen that I ran away, but I was able to use the defense that “They actually kicked me out, and I’m 18 so I don’t really have to go back”. The police or anyone at school couldn’t make me.
I finished my senior year out couch surfing, but life is pretty normal now, and in spite of its hardships, I love being free. I’m currently working on my second university degree, I have my own place, dogs, and a job that pays the bills. Sometimes in the midst if everything mundane I have to appreciate being able to drive my own car, leave my house whenever the fu*k I want, and being able to send a text without the anxiety of being constantly watched. It could have been worse for me.
Jill-Sanwich

The Iceberg that Sank the Titanic?
What Are Some Things That Look Easy But Are Difficult?
What Percent of the World’s Population is Hindu?
The Saddest Thing Happened But Never Shared With Others