Mother's day is this weekend!

From clever observations, puns and the lamest jokes, to embarrassing situations and accidentally inappropriate comments, people once again delivered with some hugely entertaining mom-ents from our beloved mothers.

1.
I once asked my mom who her favorite child was and she said, “Brent”. That was our neighbors kid.
JesseBetts11

2.
After my mom got out of brain surgery with a 40% survival rate, she was so high and happy to be alive that she felt it was a good time to prank my dad by saying “Hey Harry!” …his name’s David and he still hasn’t forgiven her for it
AmberThroesch

3.
Mom “You guys don’t give your brother enough credit. He exercises daily, eats three square meals a day and spends time out side. He has never been so disciplined.”
Me “Mom…He’s in jail.”
themessednest

4.
*Shopping at Home Depot with my boyfriend’s parents*
My boyfriend’s mom says to him “Let Jenny pick out your ceiling fan since she’ll be the one looking at it.”
partyfowles

5.
After arguing with my older sister over something pointless, I heard my mom say to my dad, “I now understand why some animals eat their young.”
abaldguytweets

6.
I lied once to get out of trouble and my mom said ” I know why your eyes are brown, cause your full of sh*t”
MgMayor88

7.
My mom couldn’t find the movie she wanted on Netflix. “Oh well, someone else is probably watching it. I’ll try again tomorrow”
HoorayPlatypus

8.
My sweet mom has just turned 80. The doctor thought she should no longer be driving and the Arkansas authorities suspended her license. Here she is posing for her new photo ID… 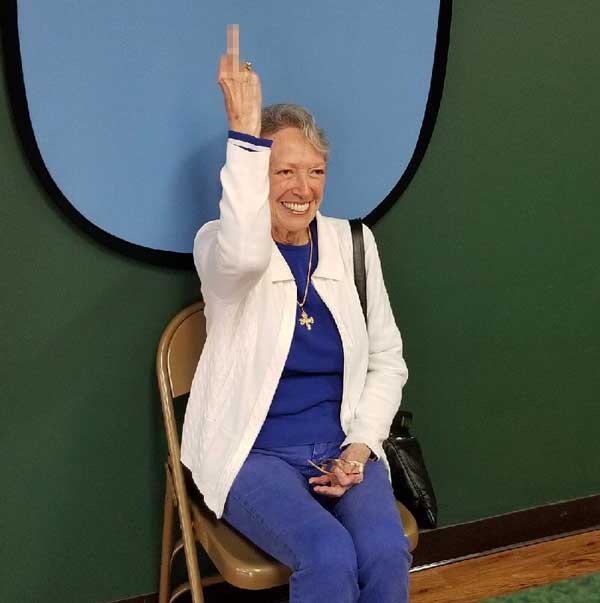 9.
“If her shorts were any shorter, we could see her ovaries”
alliesheaaaa

10.
I ordered water at a bar one time and my mom looked at me and said “If I didn’t give birth to you I would swear you were adopted.”
Ciehughes3

11.
I was recently struggling with a decision I made and asked my mom if she ever did something she wasn’t proud of. She responded, “yeah” and stared at me in silence for two minutes.
liv_colorfully

12.
When I left for college my mom asked if I remembered to get refills on my contacts and birth control. I said yes and she said, “Good, I don’t want you running into walls and getting pregnant.”
katersNgravy

13.
Me: “If you were in trouble, and could only pick one superhero to save you, who would you pick?”
Mom: “Ryan Reynolds.”
Matt_Iorio

14.
Mom accidentally grabbed the Bible to kill a huge bug in my room and before she did she said with Bible in hand, ” Lord forgive me for killing one of your beautiful creatures” and proceeded to commit bug murder
NitwitMisfit

15.
We were driving one time and this song comes on. Mom says, “I just love this song! But I’m not a big fan of the band name. I mean ‘Black Guy Pees’ is just a bit derogatory.” To which I respond, “well that’s why they’re called ‘The Black Eyed Peas’…”
Snyds_MEd

16.
My mom told me she and the lady across the street were “Friends with Benefits.” I asked her what that meant, and she said “You know, we get each other’s mail when they’re out of town and stuff.”
Brennen_Hancock

17.
My mom, in front of everyone including our pastor and my new bf, said they almost named my sister Aspen because that’s where she was conceived. She then turned to me and said, “We almost named you Days Inn!”
MalloryGross

18.
Once a waiter asked my mom how she’d like her steak, and she said “in my mouth”.
kingedhill

19.
When my mom would drive us kids around, she would brake really hard to make us lean forward and she’d say “bow to Mom” Every. Single. Time.
_itsLJ_

20.
My mom thinks the word “fart” is a cuss word and won’t say it. So when I was younger, she told her friend that I had a book called “Walter the F-ing Dog.”
iPopEditor