12 Tattoo Artists Share Their Weirdest “Are you sure?” Tattoo Requests

1.
After I got my tattoo, I’m waiting to pay and a guy next to me says he wants an angry oak tree. Artist asks him exactly what that might be and the guy says “just fu*kin Google it, give me the first result!” After some back and forth, the guy was told he was too drunk for them to tattoo him and he cursed them and walked out. tb5150 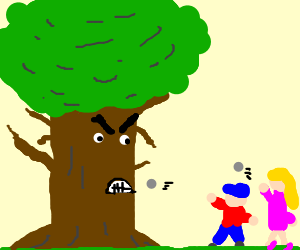 2.
Dudes want the weirdest tattoos on their butts. First guy came in straight from the local strip club with the girls signature on a napkin. Second got the word “meme” on his ass in comic sans. When I asked him if it was for a bet he replied no. No more questions were asked.
rumh4m

3.
I have a friend who has his own first name tattooed on his forearm.
When he got it I asked if it was so that he could remember it. He wasnt pleased.
chiguayante

4.
Swastika on forehead and 1488 on ankle. H is the 8th letter in the alphabet, so the two Hs stand for heil Hitler. The 14 refers to the ’14 words’. This number is integral to white supremacists and neo Nazis.
The guy was black
satanshonda

5.
Not an artist, but I have to share… my friend got a large color tattoo of Chester Cheetah (Cheetos mascot). The tattoo starts right underneath his armpit, and goes all the way down to his waist. It also reads “It ain’t easy bein’ cheesy.” Needless to say, he sent a pic in to Frito-Lay’s corporate office somehow, and they sent him a huge box of snacks. seanlee2013 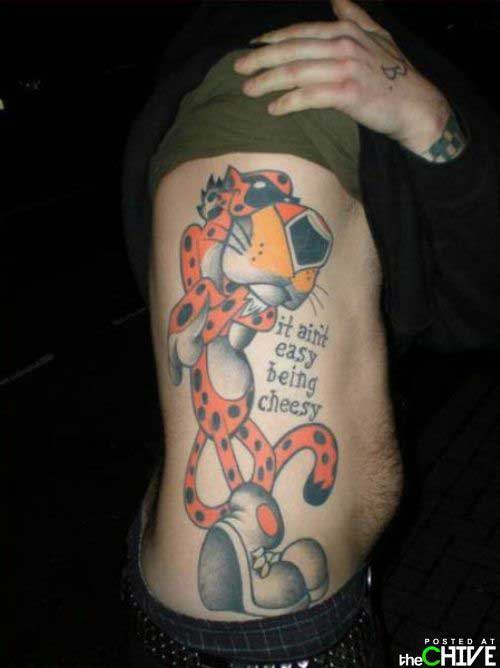 6.
Not a tattoo artist, but I once had a conversation with a dude in a bar about his pen*s tat. He had a joint tattooed on his di*k because he thought it would be funny to see a chi*k blowing him with that tat. He said the tattooist warned him that he may have some nerve damage as that’s a very sensitive area. Artist made him sign a special disclaimer. Turns out the artist was right. Dude reported that he can’t get harder than half mast.
I loled and bought him a drink.
0PsMum

7.
Once had a customer whose surname was Mackney that had me tattoo Mack on his knee. That was pretty fun.
And a girl who wanted an Anchor with a W in front of it that she said was to represent her boyfriend. He was more unhappy about it than she was.
Baresark

8.
Some guys I knew in the Army got really weird tattoos before their deployment to Afghanistan because they figured their was a good chance they would die so why not. One of them got a stick of butter with wings and a face and he calls it his butterfly.
youPCbruh

9.
I knew a guy who got a huge Insane Clown Posse tattoo on his back that literally read, “Down with the Clown ‘til I’m dead in the Grond.”
No typo. The real deal.
Bald_Soprano

10.
I think Steve-O’s giant portrait of himself on his back by one of the best portrait artists out there takes the cake.
Mayor_of_Strongbadia

11.
My buddy and another friend once tattooed himself with a game of tic tac toe
No one won
SHMUCKLES_

12.
A family friend works for a roofing company called “****” and their motto is #hustle. Half of the office got really drunk one day and had #hustle tattooed to their body. One girl got it on her butt.
One guy decided to 1 up everybody and tattoo himself with the entire company name and logo. It’s a fairly new company but man it’s going to be awkward if anybody ever gets fired
fungal42

How Many Types of Bears Are There?
What is The Single Most Underrated Trait a Person Can Have?
Lady Gaga Ellen Interview
Was Dancing in Japan Illegal?