1.
Buddy of mine got home in 2007 after being medically discharged from three combat tours in Iraq. He was walking home from a convenience store, dude tries to mug him, he bit the barrel of this kids revolver and just stared at the would be mugger. Kid fu*kin bolted.
nicemathmom

2.
I worked for Walgreens right after high school and at the height of the meth use that was happening. Had two guys come in our store with guns. One went to the pharmacy and one came to my register. Dude put a gun in my face and demanded all the money. I ofpened the drawer, gave him everything we had and offered him a candy bar. That shit wasn’t worth losing my life over. It was terrifying and Im glad I was able to stay calm. After he left I broke down tho. And in true retail fashion, my manager asked me if I could finish out my shift….
QuinstonChurchill

3.
A kid with a knife told me to give him my wallet while I was waiting at a bus stop at, like, two in the morning. He wasn’t any kind of pro, but he had a knife, so yeah, I’m not gonna say no. But I was just high enough that I asked him if I could just give him all the money in my wallet, because the cards would be annoying to replace and he couldn’t use them anyway as I’d just cancel them. He agreed, and I gave him my forty bucks.
dongbeinanren

4.
When I was in the hood with my car window open a crack, a scar faced man put his fingers through the crack, bent the window and shattered it. Suddenly, a knife was up my back and a dude with a shotgun was pointing said shotgun at us on the passenger side. They took our wallets and bags, but worst of all they took our Dunkin Donuts ! The most amusing thing of all though was the fact that the scarface man kept fiddling with the stick shift and grunting and moaning in disappointment. They didn’t steal our car cause they couldn’t drive stick !
LambsBathtub

5.
I was about 30, walking home to my parents’ place at about 10:30 at night from the bar while I was visiting. There’s a rough neighborhood that I passed through that, in my younger days, I walked through at all hours of the night and in all forms of inebriation with no trouble. But this one instance someone saw me as a target.
I wound up with nine staples in my scalp after they hit me with a bike lock.
LordFirebeard

6.
Not me, but I knew a guy who got mugged for his pizza. He was walking home from the pizza shop late on a Thursday and two dudes came up and stuck him up with guns. He freaked out and said they could take his wallet, and they were like “dude fu*k your wallet, give us the pizza.”
He filed a report with the university police afterwards and the dispatch sends out an anonymous report about the crime that took place as a courtesy to anyone in the area. When I saw it, I remembered my friend was out getting pizza and asked if he was okay. He was fine, just shaken (and pizza-less).
SolidVirginal 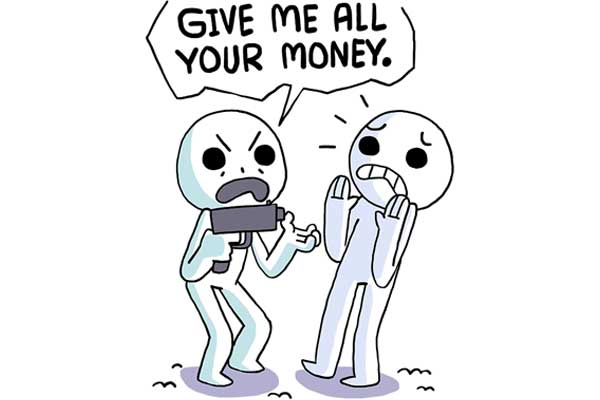 7.
Got gassed on a train in Poland. Everything got stolen, my passport, plane ticket (you needed those back then), all my stuff. I recall being really dizzy, then waking up with razored pockets.
When I woke up I was nauseous and literally in pure panic. Some military guy eventually got on the train (huge big dude) and was sitting in my cabin. I’ve never felt so relieved and safe when he sat down.
When the train arrived to CZ – there were other tourists who had obviously been robbed also. Some British girls crying hysterically. Decided I’d go straight home after that.
I’ve read it’s common on trains through rural Poland, and the gas used is CO2. I wonder how they know the quantity to use without killing someone.
Sounds like a complete BS story when I tell people, but seriously – don’t travel cheap in Poland.
suibhnesuibhne

8.
Tl;dr: thieves tried to steal our car, failed, trashed the car and shredded the wires from the inside of the dashboard.
When I was a kid, my parents were going to some sort of concert, so they took my sister and I to our grandparents house. While we were all inside the house, talking or whatever, the car was in the driveway. Their house was surrounded by a large wall, and the driveway had a large gate which you needed a combination to enter through. Eventually, my parents went out to go get our bags and stuff. When they checked the boot of the car, it was completely empty. I wasn’t particularly happy about this, because one of the suitcases they stole was full of barbies which I cherished at the time. Turns out, what I didn’t know at the time, was that the thieves also did some nice uhhh…. decorating for my parents.
They had attempted to steal the car, but they failed. As their revenge I guess, they emptied the little bins on the side of the car into the car (like on the seats and stuff) and removed the wires from the dashboard and proceeded to basically shred them.
hogwartsandpotatoes

9.
Not me, but I sorta had a part. I’m a martial artist, tang soo do, so a striking style. One of my close friends, his dad was a 4th degree blackbelt in judo and 3rd in karate, he taught him some stuff over the years, but wasn’t formally trained. My friend in general was big guy and athletic, 6’3″, muscular. I’m 5’8″, at the time not very muscular, but technically proficient and fast. We sparred a ton….every other friend i had, we’d play videogames, with him, some video games, then beating the hell out of eachother.
I eventually showed him some knife defenses that he picked up pretty fast.
Couple years later, we’re in college, he was walking back to his apartment and a guy asks for his wallet and pulls out a knife. He disarmed the guy, knocked him out and then took his wallet. Called me excited, told me the story, said he just reacted and did what i taught him.
notyetcomitteds2

10.
I was almost mugged by a drunk homeless man.
I was at a grocery store late at night, and I had parked pretty far away. As I was leaving the grocery store, with just some alcohol and soda, I see the homeless man get up and start following me. I guess I should also mention I’m a 21 year old female.
I start walking faster, but apparently so did he because I can hear him mumbling words like ‘bit*h’ and ‘money’ and ‘liquor’. I look behind me and he’s stumbling towards me, pretty close behind me. There’s no one else in the parking lot, but I yell at him to BACK AWAY, I HAVE PEPPER SPRAY. He keeps coming towards me, still mumbling slurs.
I’m almost to my car but scared out of my mind, so I went up to him and sprayed that fu*ker right in the eyes. He’s screaming out of control, I get my car, and book it out of there.
Very, very scary. Both men and women should carry pepper spray.
imaginary_gerl

How much sleep does your sign need?
What’s the nicest thing you’ve ever done that backfired?
What is National Animal of Mexico?
16 Photos That Prove the World Follows the Rule, “Another Day, Another Discovery”