1.
I once put my wet shoes on the roof of the car while loading up after a day at the lake. Forgot they were there and drove off. Got home and only one shoe was still there.
RayBrower

2.
I thought you might need one. Did you just leave it out there? You monster…
boundbythecurve

3.
No idea if it landed on the interstate or not but I once lost a shoe while skydiving. First thought was “so that’s how single shoes get on the side of the road”.
AnBeLa

4.
I’ve read that these shoes usually come from truckers that leave their shoes outside on the step to the cab during a stop and forget about them before driving again.
redchindi

5.
I was once parked at a rest stop right off of a highway. I saw this dude get out of his car with a single shoe in his hand. Walk over to the railing and just place it down on the road. Confused I asked him “wtf are you doing that for”. He said, “No particular reason. I just want to confuse people and make them wonder why there’s a single shoe here on the highway”. So, it’s probably because there’s a lot of evil in the world.
LengthyNoodle

6.
Went swimming and my feet were at first wet then covered in sand so I walked back to the car barefoot. left my shoes on the roof of the car by accident. Only one was there when I got home.
sadfa32413cszds

7.
Changing shoes at the beach or after a hike, left one on the bumper
autoposting_system

8.
My brother, who has severe autism, used to throw his left shoe out the window almost every time we passed a certain sign on I-95.
It was always the same sign, and it was always his left shoe.
xandrenia

9.
I once changed shoes before getting in the car. Left one of them on the little plastic step that’s supposed to help you get into the vehicle. I was really sad because they were my perfectly worn in converse.
rebels_girl

10.
They’re there to balance out the socks that disappear in dryers. Something something interdimensional vortex.
BillZBubba

11.
Airing out my crocs out the side window
TesticleMeElmo

12.
Not me but my sister, she threw her shoe out of the window when we were in florida. Her reason? there was an ant on it. so we had to pitstop at a shoe store to get her brand new shoes.
thatoldhorse 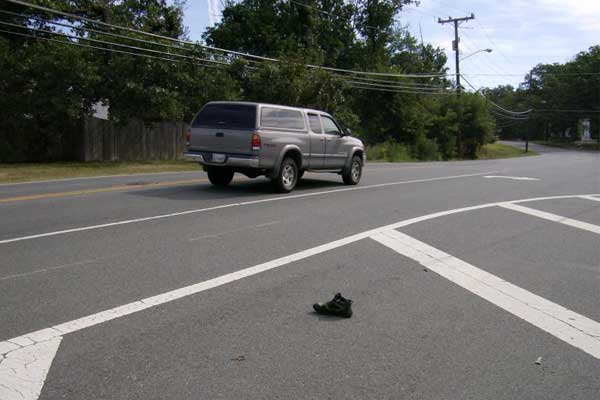 13.
My 4 year old grabbed them out of my back pack laughed maniacally said daddy so I’d turn my head then lobbed it out the window at 80 smiled like a princess the whole time
aajmac

14.
I once saw a lady arguing with someone (probably a boyfriend or something) at a gas station, she took off her shoe and threw it at the guy’s head as he was walking away. Since then I’ve been convinced that this type of situation contributes to a large portion of single shoes found in random locations.
Deanpool918

15.
When I was a young child, I threw a tempertantrum so bad that my mom threw one of my shoes out the car window
radsadmadz

16.
I was told once that in bad car accidents shoes often get thrown very far from the feet that they were attached too, particularly if a person is ejected. Something to do with the rapid change in blood pressure makes them loose.
Now it could account for a few but not all of them out there. My guess would be jackasses pitching them out the window after they buy new shoes.
Wightly

17.
Open window, foot on the door, driver opens another window, suction from hell rips shoe off catapulting it across the 405.
felinebarbecue

18.
Put my running shoes on the roof of my car before going to work in a big hurry, took off without realizing they were there. One got stuck in my roof rack and the other went flying off my roof on an 80kph thoroughfare.
09Customx

19.
When I was four I had just come to the United States to visit and I was driving to the pool with my grandma and brothers. I was sitting in the back of the car and I had the window open and I’m pretty sure this is the first time I was ever able to have the window open in the car. So I was holding my hand out of the window and feeling the wind and that was so cool. Then I proceeded to think what would happen if I held something outside the window? So I took off my slides which were like my brothers shoes, put them outside the window, and then I thought ‘If I let go, will the shoe stay?’ So then I proceeded to let go of the shoe and then it flew away and I never saw it again. Then when we got to the pool my grandma was really mad at me because now I only have one shoe and it wasn’t even mine.
putin_nyaa

20.
My wife bought our 2 year old a pair of Nike Air Huaraches and I hated them, she knew it I swear, we were in the car and my wife was on the phone chatting away and I noticed my kid pulling off one of his ghastly shoes in the rear view. My kid loves throwing stuff out the car given the chance so we have a strict no open windows in the back rule when he’s in the car. I look over to see my wife obliviously nattering still and sneakily push the window button until it’s open about 6 inches, sure enough my kid posted his shoe out the window and I promptly close it again. My wife still doesn’t know where that shoe went to this day and my son got his first pair of superstars.
vinegarballs

21.
My friend and I were tripping on LSD. Our sober friend who was with us wanted to go get some food a bit ways away and asked if we wanted to ride with him. We were bored and tripping sack so we said sure. He drove a pick up and we all couldn’t fit comfortably in the front so we decided to ride in the bed. He said he had to take the highway to get there since it was a few exits away but we were down to ride in the bed since truck bed cruising on acid is a great time (I highly recommend it). We were on 95 heading north and enjoying the wind in our trippy hair when I decided to fu*k with my friend. I took my sandal off and started flopping it around in the bed of the truck and on his legs pretending it was a fish. I noticed him staring off into the distance like acid tends to make you do and figured it would be funny to freak him out in his hallucinating state. Well, it freaked him out like I expected it to but during his freak out, he grabbed my shoe and threw it out the back of the truck. Long story short: That’s how an Adidas sandal ended up on the side of I95 and Yamato.
Merry_Dankmas

22.
I stopped to pick up a hitchhiker cause I was in a particularly helpful and risky mood. Turns out the guy was a little strange, but that is sort of what you expect. He had this huge bag with him that he threw into my back seat and then he jumped into the front seat and said c’mon let’s get moving.
I start driving and ask him what was in the bag and he says none of your fu*king business. I laugh figuring he was being a clown, but he doesn’t laugh back. So I press on and say no really what is in the bag as it’s pretty big. He raises his voice saying it’s none of your fu*king business. So I get a little stern and say hey I am going to drop you off cause you’re getting kind of weird. He slaps me in the back of the head saying just keep driving. Next time we go around a curve in the road I slam it a little hard to push him up against the door and I slam the brakes and then start to shove him out the door. We get into a tussle and are fighting but I get him out of the car and take off like a mother fu*ker. About a half a mile up the road I take a breath and then I notice he left his bag and one of his shoes fell off during the fight. So I toss that fu*king shoe out the window and that my friends is how ONE shoe ended up on the side of the road.
remarqer

Kids Draw The Weirdest Things
What is the Function of Appendix in Animals?
What Country Are Jeans Most Popular?
19 People Whose Life Is Full Of Dramedy