1.
I wish I knew then how much my future husband farted. Don’t get me wrong — it’s hilarious. It’s just…neverending.
emilym4694401a5

2.
That it’s OK to not always like each other. But you have to choose to love them every day, even when you don’t like them very much.
thibodeauxac

3.
That intimacy is important, but it doesn’t always have to mean sex. Sometimes, just holding each other can still be an important physical connection.
samanthat48ffc0353

4.
That my spouse isn’t a mindreader. Just because how you feel is obvious to you doesn’t mean it’s obvious to them. Tell them what you need them to know.
maggiel415b31dc3

5.
That you don’t have to follow societal norms. My husband and I sleep in different rooms because it works for us. We sleep better and thus, like each other more.
brittanyf4934504b7

6.
I wish I knew to marry the person my spouse already was instead of the potential I saw in them. That “potential” may never be realized.
annieb45945f625

7.
I didn’t realize how difficult dealing with in-laws would be. I had to learn how to communicate with a family that works very differently than mine does.
krislynm3

8.
That I would immediately be pressured to have kids by everyone. I couldn’t even have a stomachache without being asked if I was pregnant.
sierram4c6cc1fca

9.
That marriage is fighting about ridiculous things like both of you knowing the milk in the fridge is expired and neither of you throwing it out.
kellin4b2ebdfc5

10.
Poop talk is more common than you think.
vickyrosean

11.
That you don’t have to do everything together all the time.
dearerinm

12.
I wish I knew my husband’s spending habits. I discovered pretty quickly after we were married that I’d have to be in charge of the budget, so that he doesn’t blow money on things we don’t need.
ashleyl31 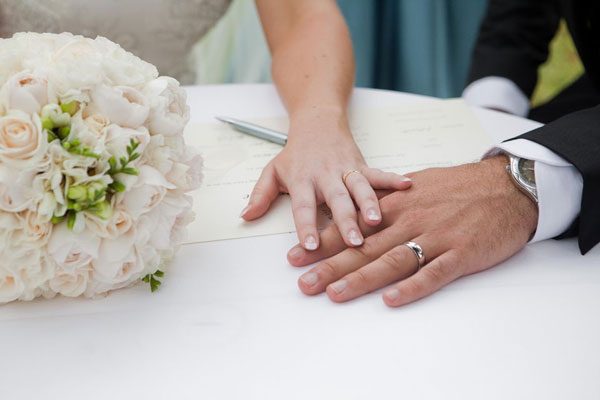 13.
That it’s actually OK to go to bed angry. Sometimes you need to sleep on it and resolve to discuss the next day — it helps you get the raw emotion out of the way so you can address the meat of the issue.
j48ee8166c

14.
I wish I knew how much more I would love my husband as the years went by. On the day of my wedding, I thought my love was the strongest it could ever be. I was wrong. 14 years, three kids, countless trying times, and lots of laughter later, I am so much more in love than I was that day.
haileyfayew28

15.
I wish I knew what a pain in the a*s it is to change your last name.
melissabate19

16.
That there might be some post-wedding blues. My husband and I had already been living together before we got married, and we didn’t have children right away. So, for a while, it felt like there was nothing to look forward to. That’s why it’s important to make sure you still put the work in to have fun with your spouse, whether that’s date nights, movie nights, or even the occasional vacation.
allisonn4524eac7e

17.
That all of the little things that annoy you will be multiplied by 10 after you get married.
loui728

18.
I wish I’d known that our taxes would go way up and stay high until we had kids. Also that if you get married after July 1st, you can claim ‘single’ for one more year on your taxes.
laurenalyssabrown

19.
I wish I’d been told that a wedding doesn’t make a marriage.
lisad25

20.
Know your spouse’s beliefs about having children and raising them. The biggest arguments my husband and I have is over how to raise our kids!
laurastallonel

22.
That graciously and quietly picking up some slack when your partner forgets to close the closet door or wash the dishes goes a long way to keep the peace.
violahastings

23.
That sometimes just sitting in silence together is the most satisfying thing ever.
dearerinm

24.
That when you get married, you become your spouse’s primary source of emotional support. You’ll be the first they tell that they got that promotion, but you’re also going to be their main source of support when they get passed over for that promotion. And you’ll have to balance your own feelings with caring for theirs. 12 years in, I’m still mastering that balance.
keelhaulrose2

25.
That nothing worth having is easy. Sometimes marriages fail. People grow and change. Sometimes they find that they were never right for each other to begin with. All you can do is work to be the best version of yourself.
ktbeh

Happiest Countries In The World
20 Times People Witnessed Something Interesting At The Beach And Just Had To Share It
What Are The Worst Travel Experiences You Have Ever Encountered?
18 Hilarious Christmas List Tweets That Also Made My Heart Grow Three Sizes