20 Hilarious Times Kids Had The Best Words To Describe Things

A couple of days ago, author Tessa Dare shared the term her friend’s daughter used to describe a crow. Halloween eagle. “And a child shall lead us. It is known,” Tessa tweeted. 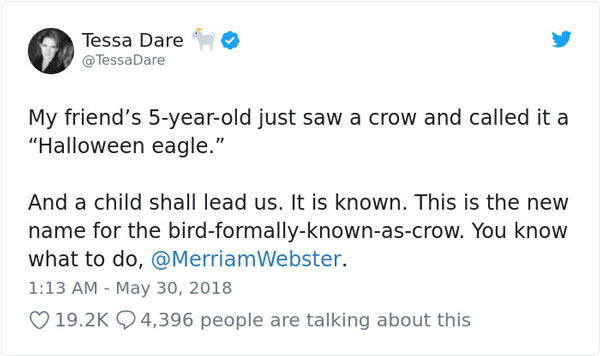 TessaDare
Admiring the creativity, parents turned to Twitter with their own.

1.
A friend’s 5 yr old saw a rhino and called it a “Battle Unicorn”. Can we let 5 yr olds christen new species please?
ZoeJTuinman

2.
My daughter once referred to dreams as “The Stories In My Eyes”
lama_j

4.
A kindergartner told me she liked my hand socks…gloves obviously. But now forever hand socks.
msjennywatson

5.
A friend’s 5yo was wailing about seeing “flamingo witches” after watching the National Geographic channel. Took a little while to figure out she was talking about vultures.
jilliank245

7.
My two year old son calls beards/facial hair “face grass”. It started like a year ago and we can’t bring ourselves to correct him.
janna_rpw

13.
My daughter when she was 3 made the word “Lasterday” meaning any day before yesterday. “I was born lasterday” or “Remember when we went to the store lasterday”
flsoccermommy22

14.
My daughter wanted to be a librarier when she grew up. Librarian? I asked. No. Librarier. Someone who goes to the library and reads books!
ActuallyLW

15.
When our son was little, he called a harmonica a “cowboy trumpet”.
SuzanneBlakeman

16.
When my daughter was roughly 5, she referred to eyebrows as eye moustaches. She’s a teenager now and it’s all about the eyebrows
lynnxxxxxxxxx

17.
My niece used to say she was “singing in her pants” whenever she passed gas.
brettspiel

18.
When my son was little, he used to say “fasting” instead of running. “Look Mom! I’m fasting!”
lukatate