20 Hilarious Times Students Took Stupidity To The Another Level

Being a college professor is certainly not the easiest job, especially when there are many students who'd rather be anywhere else in the world than in the classroom.

1.
I’m a French Teacher, so I’m not sure if this counts but here goes: everone in the class had a fairly lengthy piece of French homework, and one student put the entire thing in Google translate, but translated it to Spanish.
GreatJobTeam

2.
Not a professor but back when I was in highschool; I was a library aide and I was walking into classrooms distributing some books and I walked into a class with the professor in the middle of an angry lecture on plagiarism because one of the students turned in an essay that started with “In my 25+ years of experience in this field.”
AOLaliel

3.
This happened in high school. Senior year.
Our teacher was talking about the phases of the moon and this girl raised her hand and ask if other countries have moons too. She thought the moon was only for the US.
yohan_teh

4.
A student in my economics class started his final essay with this:
“We are all familiar with the country, Africa. Yet at the same time we know little about them. All we know is that it is hot there, African Americans live there and they are really poor. This begs the question, why is Africa that poor?”
It was just so jam-packed with stupid I had to stop grading for 24 hours.
Edit: For the record, this was indeed a college student.
bgoegan

5.
High School Teacher. Many years ago, I was showing my students clips from Romeo and Juliet. Student stared at the screen in total bewilderment for a few minutes. Then she said, serious as a cancer diagnosis, “How can he be in this movie? He died in Titanic.”
BlakeMP

6.
I had a student plagiarize on the final exam. It was a take home, essay/short answer exam. They knew to cite any sources, and to put it in their own words.
The kicker? This particularly bright bulb plagiarized me. The professor. She tried to pass off MY WORDS as her own.
RavlinBay

7.
I didn’t believe any student was dumb – he/she may only have needed the right motivation. Until I met RJ. RJ was dumb. RJ didn’t realize that the chicken we eat was the same as the animal. RJ was 21 at the time.
tapehead4

8.
I once gave a university student a C on a philosophy paper. She looked at me and said, “Do you know who my father is?”
To this day, I don’t know who he was, but her grade did not change.
HanlonRazor

9.
May or may not be dumb, but my friend and I went to her uncle’s house which had this piece of paper framed and put on the wall. It was a 0/20 on a true or false quiz. Her uncle was a professor and was just too impressed by such an achievement that he had to put it in his home.
SubMGK

10.
One of my students told me he was going to be 21 when he graduated high school. I asked him why. He explained that he ages TWO YEARS every year. He is 15 turning 16 so that is 2 years. He is probably right that he will not graduate HS til age 21, but not for the reason he mentioned lol
soulsista12 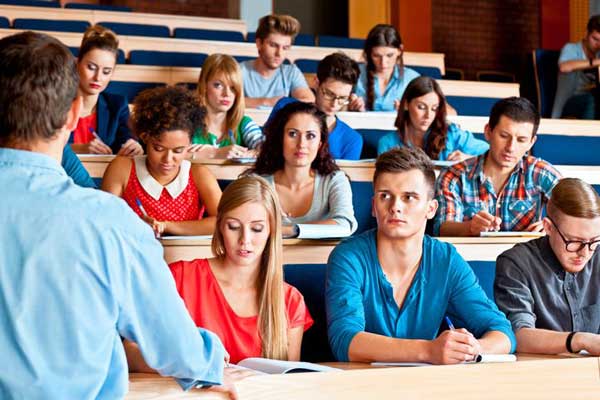 11.
Not a professor, but I worked at my university’s tutoring center while in college. Had one student who was a sports science major and would come in for tutoring for every single class. He had to do this because he was barely literate, as in reading MAYBE on a first-grade level. One of his assignments was to write about an important African-American figure. He asked me what African-American meant. The student was African-American.
For the record, I don’t blame him for being dumb. I blame every single teacher he ever had whose responsibility it was to ensure that he was learning, and instead just passed him on so he would be someone else’s problem.
minorfall23

12.
Happened in the first week of a college anthropology course:
Prof: “Let’s list a few basic differences between modern humans and animals”
Student: “We have a heart beat”
PubScrubRedemption

13.
I teach a class on the history of Psychology. When covering the chapter on behaviorism, and discussing the ideas of its founder, John Watson, who was a determinist (did not believe in free will) – a student asked me in the middle of class that if he was a determinist, why did he advocate free will in the Sherlock Holmes book?
I was really taken aback by that one.
perceptionactionprof

14.
I had a student this year who plagiarised in an assignment ABOUT plagiarism… This included copy-pasting the definition of plagiarism from Wikipedia.
MelissaLeeee

15.
I had a student who wrote an art history paper about Leonard Davin Chi. Didn’t even run that sucker through a spellcheck or anything. Referred to him as that throughout the entire paper.
glimmerfox

16.
Had a kid skip my class every day. I had a working discussion section one day every other week where the students would work on one of the homework assignments together in groups — the kid would show up during the last 10 minutes of class to join a group and put his name on an assignment. Only time I ever saw him.
So I gave him a 0 for all group work and a 0 for participation (basically just some free points because I’d randomly call on people to talk about the readings)
After he gets his grade, he wants to argue about the fact that I punished him even though I said I wasn’t going to take attendance.
No, motherfu*ker — I’m punishing you because you didn’t do shit, and you tried to scam off of other kids that did.
Alrik

17.
Not a professor, but someone in my class asked, “After a C-section, do they put the baby back in?”
_Spray_Paint_

18.
I am not a professor, but I watched one facepalm after my classmate said this:
“Ugh! I don’t even know what a verb IS!”
This was in an advanced linguistics course for would-be English teachers.
HawaiianShirtsOR

19.
One student asking the difference between psychopath and psychologist, in criminology class.
newyorkminute88

20.
One of my husband’s colleagues said a kid came up to him after an exam and said, “I didn’t know the answers to the questions you asked on the test, so I made up my own questions and answered them.” The professor said, “That’s the stupidest thing I’ve ever heard, and when I go to lunch, I’m going to tell all my friends.”
BSB8728