18 Dad Jokes That Are So Bad They’re Good

1. This comical soda can choir 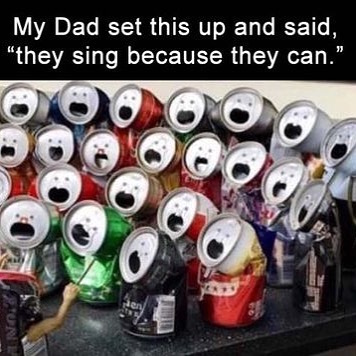 2. This ~Greecey~ French fry punchline
The first French fries were not fried in France.
They were fried in Greece.
CoryRitter

3. This hilarious Hulk pun
I DON’T KNOW WHY MARVEL HASN’T TRIED TO PUT ADVERTISEMENTS ON THE HULK.
He’s essentially a giant banner.
reallyfunnyshortjokes

4. This joke that’ll make you ~pea~ your pants
not once had I ever heard my dad say a dad joke but today that has come to an end. my mom dropped a pea on the table and said “you peed on the table”
tiffanybeltonn

5. This pun that couldn’t be spared 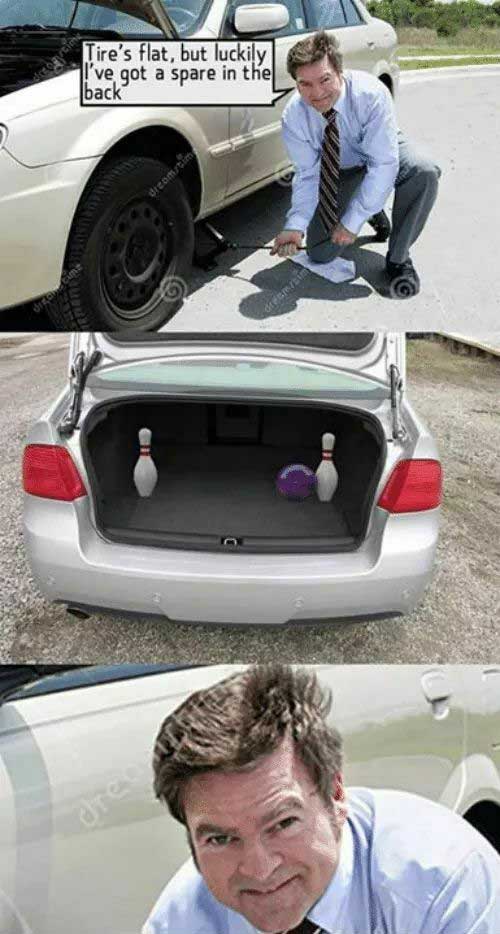 7. This witty cover band name
My friend and I are starting a new band…
We’ve decided to call ourselves ‘Duvet’…
We do covers
AidenHatfield

8. This joke meant for bookworms
I tried to get reservations to a library, but they were completely booked.
dadtellsjokes

10. This clever goodbye
What did the Buffalo say to his little boy when he dropped him off at school?
Bison.
Fawcett_Matt

11. These witty bath towel names
If a snake married a mortician, what would their bath towels say?
Hiss and Hearse
dadtellsjokes

12. This weekday punchline
Which days are the strongest?
Saturdays and Sundays. The rest are weak days.
punforfun

13. This parking joke
How much does it cost Santa to park his sleigh?
Nothing, it’s on the house.
dadtellsjokes

14. This silly sandpaper story
I read a history of sandpaper recently…The guy who invented it wasn’t sure how to go about it but he had a rough idea.
First_Jimothy

15.This wisecrack about the Earth
The only thing flat earthers have to fear… is sphere itself
rallythedead

17. This dad’s wise advice
ME: I feel like I’m dying inside
DAD: go outside
drankturpentine

18. This dad joke realization
Difference between a pun and a Dad Joke?
Puns are not always apparent.
BrodieNBCS